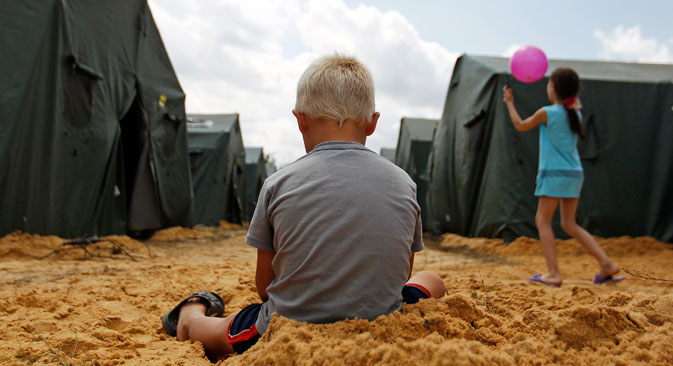 Tensions in relations between Moscow and Kiev are refusing to subside as the two countries’ positions remain firmly entrenched over gas payments and the ongoing conflict in eastern Ukraine.

Despite a cooling of rhetoric on both sides since the presidential elections in Kiev a month ago, Russia and Ukraine remain at loggerheads, with progress elusive on several fronts.Following the collapse of talks between Gazprom and Naftogaz, Kiev has proposed handing over 49 percent of the country's gas transportation network to European and American companies to ensure gas transit into the EU and hinder Russia's plans for the construction of the South Stream gas pipeline.

Cooperation between the "brotherly" states has been further undermined by recent clashes between the Ukrainian National Guard and armed militiamen not far from the Russian border, in which several mortar shells exploded on Russian territory.

Talks between Gazprom and Naftogaz have ultimately been fruitless and, having been left without Russian gas, Kiev is now trying to restrict its northern neighbor's plans for the construction of the South Stream pipeline, which will bypass Ukrainian territory. To that end, Kiev proposes handing over 49 percent of the country's gas transportation system to be operated by European and U.S. companies.

However, Russian experts maintain that this proposal is unlikely to make Europe less interested in South Stream, since European consumers are primarily concerned about the reliability and stability of gas supplies.

"Investors join a project when they are ensured of payback. This project can work only if there is transit gas in place. And transit gas can be guaranteed only by Gazprom. However, Gazprom does not want to guarantee it because it believes that transit through Ukraine is associated with big risks," says deputy head of the National Energy Security Fund Alexei Grivach. "This project can be implemented only if Europe says a categorical “no” to South Stream. That would be the only way to put pressure on Gazprom," he adds.

Grivach is convinced.that this is what Ukraine's policy of the past several months has been aimed at.

"Generally speaking, for Europe, the South Stream pipeline is superfluous, but European countries are so concerned about energy security that they have always agreed to the construction of additional infrastructure," points out Greenwich Capital partner Lev Snykov. "Even control over Ukraine's gas transportation system will not cancel interest in South Stream," he adds.

Fighting in south-eastern Ukraine has now approached the Russian border. Several Ukrainian and Russian border guards were wounded in clashes between the Ukrainian National Guard and separatist militia. Several buildings and engineering facilities of the Novoshakhtinsk border checkpoint were also damaged.

Over 14,000 refugees arrive from Ukraine to Russia

"Despite the Ukrainian president's announcement of a ceasefire, fighting in the country's southeast continues. The incident on the border clearly shows that the new authorities are not in full control of the situation and that Kiev combat units are not subordinated to them," independent military expert Viktor Litovkin points out.

Some 80 Ukrainian border guards have crossed the border into Russia and, according to an ITAR-TASS news agency report, asked "for shelter from the individuals pursuing them.” The Kremlin's reaction to reports of shooting on the Russian border was swift.

ITAR-TASS quoted the Kremlin as saying that Moscow was waiting for an explanation and an apology over the shelling of its territory. For its part, the Ukrainian Defense Ministry said that mortar fire had come not from Ukrainian servicemen, who did not fire "due to the proximity of the Russian state border,” but from "terrorists".

The other side of war

Since the start of the military operation in south-eastern Ukraine, there has been a sharp increase in the number of people fleeing Ukrainian territory for Russia. Late last week, the head of the Russian Federal Migration Service, Konstantin Romodanovsky, said that every day thousands of Ukrainian nationals from the country’s Russian-speaking east enter the Rostov Region alone, some of whom settle down there, while others proceed to other parts of the country.

The official spokesman for the Russian Ministry of Emergency Situations, Alexander Drobyshevsky, has announced that nearly 220 temporary shelters, including tent camps, have been set up in southern and central Russia to accommodate people arriving from Ukraine.

"There are currently 11,100 people, including 5,400 children accommodated at temporary shelters," he said.

A European law expert at the Moscow State Institute of International Relations, Nikolai Toporin, explains that refugees, if they decide to remain in Russia, will be able to receive Russian citizenship within three months. In the meantime, while their applications are being considered, people can find jobs through mobile employment services deployed in the border areas.

"Refugees can quickly find jobs in catering, as cooks and kitchen staff. There are also vacancies in the construction sector. Pay for these jobs for Ukrainian nationals will be the same as for locals, at about 40,000 rubles," an employment service official, Zhanna Deniskina, said.

The head of the Russian presidential administration, Sergei Ivanov, has promised that refugees from Ukraine who have decided to remain in Russia may soon be provided with targeted financial assistance. They will receive funds from the federal program for resettlement of compatriots living abroad, which will now cover the Rostov Region and Stavropol Territory too.

"Many people find themselves in an information vacuum and have no idea what happened to their families and friends who decided to remain in the southeast. Calls to Ukraine are expensive and the lines are bad; the minute you reach somebody on the phone, the lines goes dead," one refugee told RIA Novosti. "Many, when they do manage to get through, hear sad news, as their friends have been wounded or even killed in clashes between militia and the National Guard."