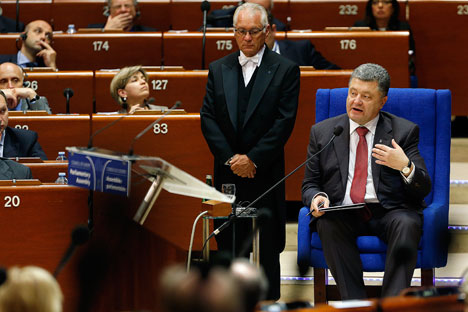 Vzglyad states that Petro Poroshenko has no chance of maintaining his power and preserving the country. Source: Reuters

RBTH presents a selection of views from leading Russian media, analysing the likely consequences of Ukraine’s signature of the association agreement with the EU and the significance of the amendments to the reform of the Ukrainian Constitution, and predicting the imminent failure of Ukraine as a unified state under President Petro Poroshenko.

Nezavisimaya Gazeta believes that the EU is pushing Kiev towards economic suicide: President Petro Poroshenko has to sign the economic part of the association agreement between Ukraine and the European Union. The newspaper emphasizes that preparation of the agreement project began in 2007. However, the Ukrainian side decided to delay its euro-integration, saying that the free trade zone would damage the Ukrainian economy. It was this decision, the publication explains, that angered the population, which believed in the European reforms after the signing of the agreement. It also angered the big businesses hoping to obtain European status. Consequently, "towards the end of winter the shares turned into a revolution." Ukraine's new authorities immediately announced the country's return to the process of European integration process.

Nezavisimaya Gazeta's experts say that the economic part of the agreement is already well-elaborated, something that will be sufficient for the Ukrainian government, if politically motivated, to carry out the reforms that will "bring the country closer to European standards in all areas of life." Moreover, the newspaper writes that the EU is willing to provide financial support: All allotted resources will be marked as preferential target credit, whose use will be controlled, while separate assistance will be given to the reformation of the economy of eastern Ukraine, with the aim of lowering its dependence on the Russian market.

However, according to the newspaper, in Kiev some believe that the EU has increased its pressure on the Ukrainian government, which is likely to lead it toward suicide. After the signing of the association agreement there may be serious consequences, such as "the sharp devaluation of the Hryvnia, inflation and even hyperinflation, as well as a traumatic decrease in the population's standard of living." Nezavisimaya's experts call the Ukrainian government's actions "venturesome" and remark that "the Russian market is necessary for the stabilization of Ukraine's economy."

Vzglyad declares that Petro Poroshenko has no chance of maintaining his power and preserving the country. The newspaper asserts that "the pro-Russian separatists will never capitulate to Poroshenko, while he himself is obviously not inclined to continue fighting." Therefore, according to Vzglyad, the Ukrainian president will be concerned with preserving his image of "a fighter for the unity of Maidan," while finding himself "in an impasse."

"It is clear that the Ukrainian president is making his plans with the U.S. and the EU's unconditional support, and therefore, essentially becomes their instrument," writes the newspaper. Vzglyad believes that the U.S. still thinks Kiev has a chance of obtaining a military victory.

However, the newspaper is certain that the more the U.S. presses and the tougher its measures, the more disillusioned Americans will later be with their foreign policy. "In any case, sooner or later Washington will have to admit the uselessness of pressuring Moscow on the Ukrainian issue and will abandon Ukraine," the newspaper sums up.

According to Vzglyad, Petro Poroshenko has three options: To "try to squash the pro-Russian separatists with force, try to contain them by means of negotiations or resign [himself] to the loss of Donetsk and Lugansk." But whatever course he takes, concludes the newspaper, the end of Ukraine as a unified state is inevitable.

Expert magazine believes that the amendments introduced into the reform of the Ukrainian constitution are of crucial importance and necessary for Ukraine's further development, but "do not respond to the most serious demands of the Donbass." Expert remarks that according to the new constitution, administrative-territorial subjects may give "the Russian language and other minority languages" special status, but nothing else.

On one hand, the Ukrainian authorities can be understood, states the magazine. They know that if "the Russian language becomes national, then the 'partially artificial Ukrainian language' de facto risks becoming a regional language, one spoken only in western Ukraine, writes Expert.

On the other hand, according to the magazine, Ukraine's social schism has reached such a degree that long-term priorities should be sacrificed in the interest of short-term ones. "It is unlikely that the rioting Donbass will at this stage carry out any constitutional changes; after the bombings, they will squeal and agree to the federalization of Ukraine," argues the magazine.