Experts: Rhetoric in Russian and Western media over Ukraine worse than during Cold War 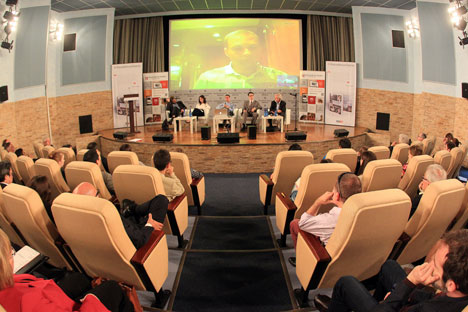 The events surrounding Ukraine have not only dragged the world into a new information war but have also revealed serious differences in how the powers that be perceive reality.

Some of Russia’s most respected experts in foreign policy discussed the information war over Ukraine in a roundtable on June 27, held as part of the Russia Beyond the Headlines fifth annual Partners Meeting.

The participants of the roundtable agreed that even during the Cold War, Russia and the West did not use the kind of emotional and subjective rhetoric that has been common during the crisis in Ukraine.

"We have come up against the problem of Russian and Western media giving a simplistic interpretation of the serious ethno-cultural and historical problems of Ukraine," said Fyodor Lukyanov, chairman of the board of the Foreign and Defense Policy Council and editor-in-chief of the journal Russia in Global Affairs.

Lukyanov noted that people are not always able to see the difference between facts and editorializing in a news story, which has resulted in a great deal of confusion about the situation on the ground.

"There is too much information about Ukraine in the media at the moment, the audience is overwhelmed by the amount of facts they are bombarded with in this 'information war.’ As a result, they are confused," Lukyanov said.

That point of view was shared by Alexander Gabuyev, editor of the magazine Kommersant-Vlast. According to Gabuyev, the lack of awareness of the ethno-cultural, historical and political background involved in the conflict not only among the general public but also among journalists has resulted in in propaganda and distortion.

"Despite all the problems of 'mass' journalism, to improve the quality of their reporting, journalists should be in constant contact with political leaders responsible for decision making on both sides. Otherwise, information becomes one-sided and turns into propaganda," Gabuyev said.

Greg Walters, a former Moscow-based reporter for Dow Jones and Bloomberg, asked the roundtable panelists if officials from both Russia and Ukraine were making themselves available to reporters.

Walters reported from Georgia during the Five-Day War in August 2008 and pointed out that one of the reasons Russia lost the information war during this conflict was that Russian officials were extremely reluctant to talk to the media until the conflict was over.

"We were able to get comments from high-ranking Georgian officials and politicians with surprising ease. I personally woke up the Georgian defense minister at 3 a.m. to get answers to my questions. The authorities in Tbilisi wanted the world to learn their point of view on the events in the region, and they succeeded in that," he said.

In response to Walters’s comment, the panelists agreed that while Russian officials were easier to reach today than in the past, journalists still faced challenges getting accurate information from officials.

What does Ukraine mean to Europe?

Moving past the topic of reporting on the conflict into a discussion of Ukraine’s future, Fyodor Lukyanov said that Kiev has a better chance of becoming part of the European family than Russia did 20 years ago, although he noted that it will be hard for the Ukrainian authorities to bring the country in line with European standards.

Channel One cameraman dies from injuries in Donetsk

"From the point of view of readiness to become part of Europe, Ukraine is hopelessly far from its goal. It would take consistent draconian measures to bring the country in compliance with EU standards. I don't know how feasible that is at present," Lukyanov said.

RBTH editorial consultant and former head of the World Association of Newspapers and News Publishers (WAN-IFRA) Timothy Balding said that for its part, the European Union is not convinced that it is ready to admit one more country, albeit on the basis of an association agreement.

"The events in Ukraine came as a surprise for the EU. We came under pressure from different sides: on the one, from a drastic and powerful expression of the will of the people to become closer to the EU, and on the other, from politicians who are seeking to implement their interests in the region," Balding said.

Europe has overburdened and overstretched itself with expansion, Balding continued, and the EU has its own internal dilemmas that need to be resolved before making any statements or making any decisions concerning Ukraine.

Lukyanov said that mentally, Europe does not yet perceived Kiev as part of its family and its interest in that country is driven primarily by Europe’s relations with Russia. "Ukraine has become a derivative of the complex historical knot of relations between Moscow and Europe. A set of historical events is causing excitement among European countries," Lukyanov said.

He added that Ukraine's political culture consists in shifting blame for internal problems onto external forces. Previously, this function was filled by Russia, whereas now this list has been expanded to include the United States and Europe.

Representatives of the world’s leading newspapers gathered in Moscow on Jun. 26-27 to attend the fifth annual Partners Meeting of Russia Beyond the Headlines, which involved a series of seminars and workshops as well as networking events.

This year's conference was attended by representatives of 26 leading papers from 23 countries, including top managers and editors from such major publications as The Washington Post, The Wall Street Journal, The Daily Telegraph, Le Figaro, The Economic Times, China Business News and La Nacion among others.