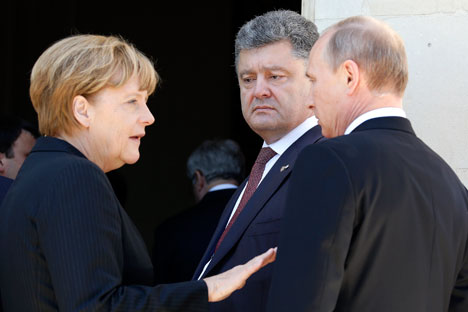 RBTH presents a selection of views from leading Russian media, featuring analysis of the death of another Russian journalist in the Donbass, ongoing discussions on a cessation of hostilities, and the growing internal pressure on Ukrainian President Petro Poroshenko to seek other strategies to resolve the conflict in eastern Ukraine.

The Kommersant daily reports the death of yet another Russian journalist in Ukraine. Channel One cameraman Anatoly Klyan died of a wound to the stomach. The incident took place near a military unit in the Donetsk Region, where Klyan had arrived, together with a correspondent and a sound engineer, to film a report about soldiers' mothers.

The paper points out that Klyan did not switch off the camera even after having been wounded and continued to film for as long as he had any strength left. He received first aid from his colleagues at the scene but the wound proved fatal.

The Russian Investigations Committee has launched a criminal investigation into Anatoly Klyan's death on charges of murder, Kommersant reports. This criminal case will be combined with an earlier launched criminal case investigating the use by Ukrainian servicemen, National Guard and Right Sector fighters of banned weapons and methods of warfare. In addition, the paper continues, the Russian Foreign Ministry has demanded that the Ukrainian authorities conduct a probe into the incident and punish those responsible.

The death of yet another Russian journalist, Kommersant says, has once again shown that the Ukrainian military and security structures clearly do not want the armed conflict in the east of the country to de-escalate, and keep violating the fragile truce. The paper recalls that earlier this month, a VGTRK (All-Russia State TV and Radio Broadcasting Company) crew was caught in mortar fire in southeast Ukraine, in which the channel's special correspondent Igor Kornelyuk and video engineer Anton Voloshin were killed. However, Russian TV channels have no intention of leaving the conflict zone yet.

Another article in today's Kommersant looks at the discussions Russian President Vladimir Putin, Ukrainian President Petro Poroshenko, French President Francois Hollande, and German Chancellor Angela Merkel had on Ukraine by telephone. The talks focused, according to the paper, on resolving the crisis in the southeast of the country, in particular on extending the ceasefire and establishing control over the Russo-Ukrainian border. The talks took place some 24 hours before the three-day ceasefire extension that Poroshenko had announced at the EU summit in Brussels on Friday was due to expire.

Kommersant points out that the European Union has called for parties to agree upon a ceasefire and a mechanism for border control, for returning border checkpoints seized by "self-defense" forces under Kiev's control, freeing hostages, and holding talks on implementing the existing peace plan.

Otherwise, the paper continues, Brussels has promised to resume considering "targeted measures" once the ceasefire expires. According to Kommersant, the leaders of Russia, France and Germany have appealed to the Ukrainian president to extend the ceasefire. Another important issue discussed during the talks was the issue of monitoring the Russo-Ukrainian border with OSCE participation.

In an article headlined "Poroshenko is under pressure to produce Plan B,” the Nezavisimaya Gazeta newspaper says that Ukraine’s National Guard is unhappy with what it sees as a lack of resolve demonstrated by the Ukrainian authorities. The ceasefire in the Donbass is about to expire, although clashes in the Donetsk and Lugansk regions have continued throughout its duration. The National Guard has appealed to the public to urge the president to start implementing Plan B, Nezavisimaya reports. "Nothing is known about what this plan consists of. Experts believe that it may envisage the introduction of martial law in the Donetsk and Lugansk regions," the paper says.

The anti-terrorist operation is being conducted with the use of limited resources and in limited areas, whereas martial law allows for the large-scale use of armed forces. Nezavisimaya Gazeta points out that Poroshenko has threatened supporters of the self-proclaimed Donetsk and Lugansk people's republics with a Plan B if during the week-long ceasefire they fail to lay down their arms, send mercenaries back home and surrender.

Nezavisimaya also tells its readers about technical consultations on how to resolve the crisis that have begun with participation of not only Ukraine, Russia and OSCE representatives but also representatives of the self-proclaimed republics. Experts polled by the paper suggest that Petro Poroshenko is trying "to use all means for a peaceful resolution of the crisis,” while Russia "is maneuvering in order to avoid a third tier of Western sanctions.”

"Russia's strategy consists in dragging out the talks, legitimizing the Lugansk and Donetsk people's republics, and turning this conflict into a frozen one, similar to the situation in the Dniester region," Nezavisimaya concludes.