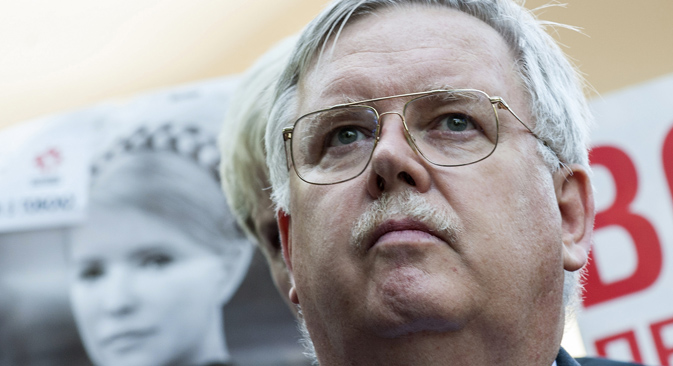 The United States has asked the Russian Foreign Ministry for approval to John Tefft's appointment as the new U.S. ambassador to Moscow. Experts polled by RBTH believe that Tefft's appointment has already been approved in principle, although it is likely to make relations between the two countries frostier.

The United States is waiting for the Russian Foreign Ministry to approve of John Tefft's appointment as the new ambassador to Moscow, the Russian daily Kommersant has reported, citing sources in the U.S. Department of State. According to the paper, the approval is likely to be granted. Tefft's diplomatic career features several postings to post-Soviet countries.

"As a former Soviet Union expert, Tefft is very well versed in the intricacies of the corruption mechanisms of our countries," said Ukrainian pundit Vadim Karasyov.

"While serving as ambassador to Ukraine, he had a good understanding of Ukrainian business elites, and managed to establish good relations with the key Ukrainian tycoons, whom the country's political life depended on,” Karasyov added.

“After all, the Americans always had pretty good relations with [the previous Ukrainian] President Viktor Yanukovych; there were quite a few Americans among his advisers and Tefft was always welcome at the presidential administration."

Tefft's posting to Ukraine coincided with work on drafting Ukraine's association agreement with the European Union. Until September 2013, Kiev did not give any cause to doubt that the agreement would be signed. In November, however, President Yanukovych had a change of heart, plunging Ukraine into a full-scale political crisis that remains still unresolved. However, Tefft had already left his post by the time these events took place, stepping down in August.

Georgian political analyst Gela Vasadze, in an interview with RBTH, described Tefft, who became U.S. ambassador to Georgia in 2005, as "not the worst American ambassador.”

"He was quite careful and balanced in the complex relations between the authorities and the opposition. At the time the U.S. did a lot to prevent the Georgian situation from following a tough authoritarian scenario and Tefft should take a lot of credit for that," said Vasadze.

In August 2008, during the armed conflict between Russia and Georgia over South Ossetia, a breakaway region that declared its independence from Georgia back in 1992, the U.S. was firmly on the Georgian side, which, according to Vasadze, was largely down to Tefft too.

CV is cause for concern

For his part, Valery Garbuzov, deputy head of the Institute for U.S. and Canadian Studies thinktank, believes that the U.S. choice of ambassador and Tefft's track record are a clear sign of a new quality in U.S.-Russian relations - and a challenge of sorts.

"On the one hand, he is an expert on Russia and the former Soviet Union, so there is no reason to doubt his professionalism. On the other hand, the list of his previous postings – Lithuania, Georgia, Ukraine – does give reason for concern," Garbuzov said.

According to him, Tefft is a diplomat who is rather tough in defending his stance and who has often criticized Russia. Garbuzov believes that Tefft's appointment is inevitable: "Having chosen the political line that we are now seeing as regards Ukraine, Russia probably realizes that it is entering a period of difficult and even confrontational relations with the U.S.

“In diplomatic practice, an ambassador's appointment is often a signal for the country to where the ambassador is appointed." In Garbuzov's opinion, since the U.S. has submitted an official request for Tefft's appointment to be approved, it means that the appointment has already been discussed with the Russian side and is likely to go through.

He was appointed to those posts due to his expertise on the Soviet Union and post-Soviet space. Back in 1989, he served as deputy head of the Office of the Soviet Union (later Russia and CIS) Affairs at the Department of State. All his subsequent posts were related to the former Soviet Union. In 2003, Tefft was appointed Head of the U.S. Mission in Lithuania. In 2004-05, as Deputy Assistant Secretary of State for European Affairs, he supervised U.S. bilateral relations with Russia, Ukraine, Belarus, and Moldova.

Tefft is sometimes described as an expert in "color revolutions" but it would be more accurate to describe him as an expert in countries that have been through a revolution. Lithuania was followed by Georgia, where Tefft became ambassador in 2005. Then came Ukraine. Tefft presented his credentials to President Viktor Yushchenko in 2009, not long before Yushchenko was replaced by Viktor Yanukovych. He left that post in August 2013.