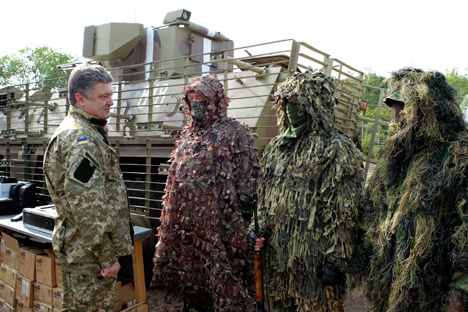 The Kommersant daily writes that the Ukrainian Army, on the orders of President Petro Poroshenko (left), has resumed its offensive in the east. Source: AP

RBTH presents a selection of views from leading Russian media, featuring reaction to the Ukrainian Army’s resumption of military operations in the east of the countryand , analysis of President Petro Poroshenko’s motivation in ending the ceasefire, and a softening of anti-Ukrainian rhetoric in some Russian media.

The Expert newspaper writes about why Ukrainian President Petro Poroshenko has decided to resume military operations in the east of the country.

“It is understandable why the head of state has taken this step – he can see quite well that the revolution that started in Ukraine is continuing. The majority of militias from the Right Sector or the Maidan Self-Defense Forces are taking advantage of the weakness of central authority,” concludes Expert.

Minimum credibility and confidence in the government, the newspaper notes, has led to the cancellation of the truce. Expert suggests that Poroshenko tried “in one fell swoop to solve several problems”: to satisfy the desires of Maidan protesters and protect himself, as well as, by means of a military offensive, minimize the number of radicals as much as possible.

In addition, capturing at least one of the centers of resistance would grant legitimacy to Poroshenko’s government, believes Expert.

The newspaper reminds its readers that a number of MPs in the Verkhovna Rada want the president to introduce martial law immediately without dragging his feet. However, it seems that Poroshenko is looking at such a move only as a last resort.

The RBC Daily newspaper writes about a change in the approach that Russian media is now taking toward the coverage of the crisis in Ukraine.

The anti-Ukrainian rhetoric on federal channels and coming from state news agencies has noticeably softened in recent days, with the use of the term “punitive operation” to describe the actions of the Kiev authorities having almost vanished, according to data provided by Medialogia.

The opponents of Kiev are less likely now to be called “supporters of federalization” and are more often labelled as “militias”. Journalists have admitted that they were asked to tone down their rhetoric. However, with the termination of the ceasefire, a new surge in tough rhetoric may be on the way.

The Kommersant daily writes that the Ukrainian Army, on the orders of President Petro Poroshenko, has resumed its offensive in the east.

The special operation, the newspaper noted, has been resumed despite the agreement reached between the leaders of Russia, Ukraine, Germany and France during a conference call – when it was decided to seek a bilateral ceasefire between Kiev and the militias, and jointly with OSCE observers, to monitor the border from the Russian side.

Kommersant tells its readers that Moscow has accused Kiev of thwarting the implementation of an important peace initiative under “outside influence, and in defiance of the leading members of the European Union.” “The Russian Foreign Ministry was clearly alluding to the U.S.,” the newspaper noted.

The question of whether Russia had made the necessary contributions to the de-escalation of the conflict in eastern Ukraine was discussed at a meeting of the Council of the European Union.

Its members, the newspaper says, have acknowledged that Moscow had taken a number of steps that had been long awaited from Russia – it helped in the negotiations to release hostages, including international observers, entered into direct negotiations to resolve the situation, and agreed for the need of implementing effective border controls under the supervision of an OSCE mission.

Rossiyskaya Gazeta tells its readers about the renewal of hostilities in Ukraine. The publication reports that in Lugansk the shelling is being aimed “directly at residential buildings.”

The queue at the border crossing instantly disappeared, and the place was closed. “A new phase of the war has started,” says the newspaper.

Moreover, Russian journalists have once again become victims: A REN TV camera crew, which was returning to Russia, came under mortar fire, and the TV channel correspondent received a concussion.

In the MK newspaper, an article appeared entitled “Putin: Poroshenko will now answer for everything,” in which the publication describes a meeting of the Russian president with the country’s diplomatic corps.

The president traditionally speaks to employees of the Ministry of Foreign Affairs every two years. However, this time the meeting took place in a difficult political situation for Russia, said MK – as many international projects and contracts, being prepared for signing, were frozen.

The newspaper writes that Vladimir Putin also drew attention to the fact that the sanctions imposed against Russia are contrary to the UN Charter, and many partner countries were forced to sacrifice their own interests.

As an example, he cited France, now under considerable pressure from the outside, “not to deliver the Mistrals” to the Russian side, says MK. However, Vladimir Putin did not publically name the source of this pressure.

The president acknowledged, the newspaper writes, that the international situation is now developing on a negative scenario, and the events in Ukraine were “the culmination of negative trends in world affairs.”