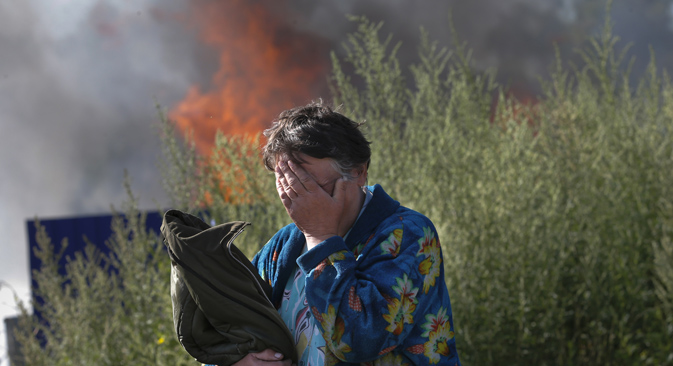 Prospects for peace in Ukraine have receded again after President Petro Poroshenko called an end to the ceasefire in the east of the country. Continuing hostilities, ongoing attempts to negotiate a political settlement and a growing stream of displaced citizens mean that the outcome of the conflict remains anything but clear.

Ukrainian President Petro Poroshenko has announced an end to the ceasefire that he initiated on June 20. “We will attack and free our land,” the president declared in an address to the Ukrainian people on the night of July 1. Poroshenko emphasized that the peace plan he had proposed the day before the ceasefire will remain in force.

The ceasefire that wasn’t

The militiamen in south-eastern Ukraine and regular soldiers continued to shoot at each other even during the ceasefire. People were still kidnapped, and Anatoly Klyan, a cameraman from Russian television channel First Channel, was killed. According to UN data for the end of June, over 110,000 Ukrainian residents have migrated to Russia, and more than 54,000 people are seeking refuge in other Ukrainian regions.

There was no ceasefire as such, according to Russian political scientist Yevgeny Minchenko. “Both sides used it only to take a breather and regroup,” he said. Political scientist Andrei Okara, who specializes in Ukraine, thinks that it was impossible to achieve a ceasefire because neither side has sufficient control over its own subdivisions.

“The south-eastern militias are a very diverse formation. There are those for whom war is a business, there are people with a criminal past who have gotten hold of weapons, and there are people who are truly convinced in the cause. For them, Moscow and Putin himself are the authority, but not to such a degree that they strictly obey and comply. And the Ukrainian army was formed essentially only in the last two months, prior to which it didn’t exist,” Okara said.

Besides that, Ukrainian public opinion was highly ambivalent with respect to the idea of the ceasefire itself, and Poroshenko could not have failed to take that into account. Several thousands of people took to the streets of Kyiv in protest on June 28, demanding martial law in the south-east and an end to the ceasefire, which, in their opinion, would lead to an even larger war. Therefore, according to Okara, Poroshenko’s decision not to extend the ceasefire should be considered not only from a military, but also from an internal political, point of view.

Minchenko, who considers the resumption in hostilities to be logical, is extremely pessimistic about the future. “The war will continue, and people will gradually leave their homes. It will be bad for both sides, but neither one can stop now,” the expert said.

“The Ukrainian troops risk getting embroiled in urban combat, and the separatists are obviously hoping for that. That means municipal infrastructure will be destroyed, leading to a humanitarian catastrophe. In addition to that, the separatists have the possibility of waging guerrilla warfare by bringing it to other regions,” he added.

These fears are completely justified; just as the Ukrainian president was addressing the people, there were four explosions on the Donetsk railway. And the day before, there was an explosion on a railway line in the Kharkov Region, where there is no war.

In Okara’s opinion, the ongoing formation and organization of the Ukrainian army will gradually allow it to seize the initiative.

Meanwhile, attempts are still being made to reach a political settlement. The day before the ceasefire was called off, the leaders of Germany, France, and Russia spent hours on end at the negotiating table. At the same time, the EU leadership has warned Moscow that it is ready to unleash another round of sanctions against Russia at any moment, and this time they will not be personal, but economic.

“A political settlement would suit Moscow, but there are no institutions with which it can come to an agreement, either in Kyiv or Donetsk,” Minchenko said. “On the other hand, Europe has just signed an association agreement with Ukraine, and it is also interested in ending the conflict. That’s why, to my knowledge, Angela Merkel insisted that Viktor Medvedchuk attend the negotiations between the militias, Moscow, and official Kiev, and Kiev had to agree to it.”

Medvedchuk is a Ukrainian politician who headed the administration of former Ukrainian President Leonid Kuchma. He is not the most popular political figure in Ukraine right now, although he does enjoy a reputation as an influential shadow politician and businessman.

Leaks from the negotiating table indicate that there is talk of appointing Medvedchuk governor of the Donetsk Region. Both Minchenko and Okara consider that such a discussion is logical and realistic. In that event, Moscow’s interests would be in line with the interests of the Ukrainian oligarchs, with whom Kiev will have to reckon, according to Okara.

“A compromise between all parties is possible in that style,” he said. But both Minchenko and Okara agree that the armed confrontation and the search for a political compromise will continue separately from one another into the near future.