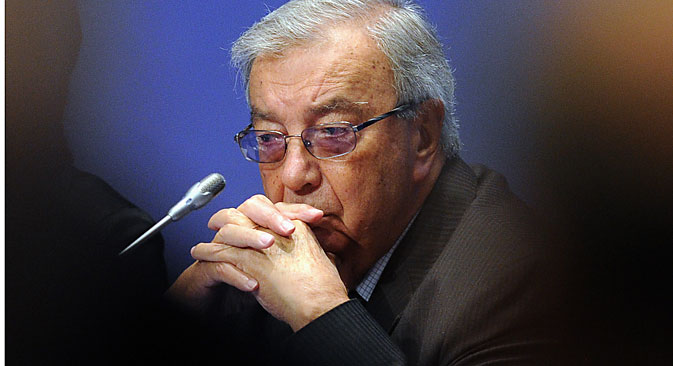 RBTH invites its audience to read an excerpt of an interview with former Russian Prime Minister Yevgeny Primakov, in which the Russian political leader, who still wields political influence despite having left office, speaks with the TV channel Rossiya 24 about the Ukraine crisis and its impact on the modern system of international relations.

Many think that Crimea was in our pocket from the very beginning. That is incorrect; we had no part in starting the Ukrainian crisis.

During the crisis, a goal was set: Return Crimea to Russia. In order to do this, there were two prerequisites. Firstly, the Crimean people had to express their will for such a thing to happen. Events were already in motion that indicated that the Ukrainian authorities might try to hinder the will of the Crimean people through force. In light of such circumstances, President Putin requested permission to send in troops.

The Kremlin took steps to ensure a political solution to the crisis. There were telephone conversations with Western leaders, and contact was made with foreign ministers, but those are just empty formalities. It is not always possible to have serious conversations this way.

We participated in all, even the smallest, international meetings, in which Ukraine also participated, with the goal of bringing about a political solution. However, the Ukrainian leadership blocked such initiatives.

On the possible deployment of Russian troops in Ukraine

Russia had to be prepared in the event of an emergency. The goal was not just to have a Russian troop presence in southeast Ukraine.

They [the Ukrainian authorities – RBTH] know that we are not deploying troops...

To do so would lead to a dead end, and not only in terms of the situation in Ukraine. It would also put an end to certain trends, trends which I believe are positive, to push back from that line which the United States continues to chip away at.

By our decision to withdraw permission to deploy troops to Ukraine, we will continue to strengthen our ties with those forces in the West that want to normalize relations with Russia.

If we had deployed our troops, this would have led to a sharp deterioration of the situation in Ukraine, as well as of our relations with the West, which must be maintained.

A new stage in the development of international relations

Through our behavior at the beginning of the Ukraine crisis, we heralded in a new stage in the development of international relations.

After the Cold War, two parallel phenomena began to develop. One was the creation of a multipolar world. The second was a process that began after the collapse of the Soviet Union and the signing of the Warsaw Pact, in which the United States became the most powerful country in the world. That was a subjective process that imposed a unipolar world order, with the U.S. as hegemon. We have always stood against this, but our stance was limited to rhetoric. Now, for the first time, Russia has proven that it can practically solve problems that are connected with its national interests. This has led to a clash of the two phenomena.

The isolation of Russia

In a globalizing world, it is impossible to talk about an isolated Russia. We are not isolated from others and we do not isolate them, not even our enemies. We have diversified our economic orientation…

On the role of the media

We somewhat overdid our coverage of the events... The general tone was such as if we were preparing the country for war.

On future relations with Ukraine

Our relations with Kiev will be based on our mutual interests…

The main criterion is the ability of the Kiev leadership to resolve issues in a constitutional way so as to ensure that the interests of the population in the southeast are protected... They must reconcile themselves to the fact that in the southeast, there is a Russian-speaking population that considers itself part of the Russian world.

We need an independent neighbor... Take, for instance, our Customs Union — are our partners truly complying with our instructions?