Vitaly Churkin: Crisis in Ukraine may lead to humanitarian catastrophe 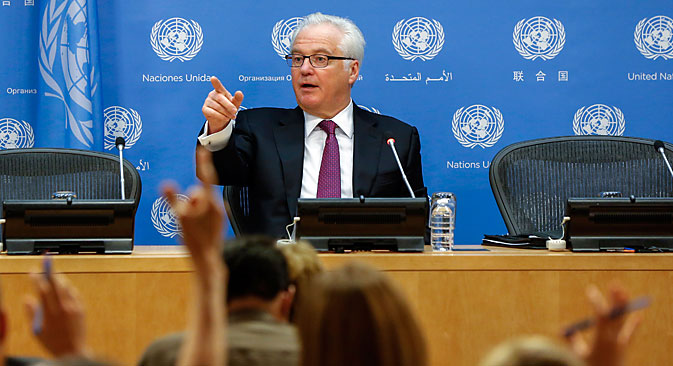 Vitaly Churkin: "We have considered a wide range of issues: those to do with Asia, Africa, and the Middle East". Source: Reuters

Despite the ongoing crisis in Ukraine, the UN Security Council is continuing to look for solutions to other international problems, including the war in Syria, the rise of Islamic radicals in Iraq, and the future of Afghanistan. Vitaly Churkin, Russia's permanent envoy to the UN, spoke to RBTH about the challenges facing the organization and the clash of perspectives among representatives.

RBTH: Russia's presidency of the UN Security Council is nearly over. How would you sum it up for the benefit of our readers?

Vitaly Churkin: There has been a lot of work, including over and above what was planned. We have conducted far more sessions than was originally planned. We have considered a wide range of issues: those to do with Asia, Africa, and the Middle East. For us, of course, the situation in Ukraine was a priority.

RBTH: Could you please elaborate on this? What has the Russian delegation been doing in this area?

V.C.: Despite the fact that Security Council members remain very sensitive on the topic of Ukraine, it appears that over the past month it has become possible to make headway in mobilizing the UN's capabilities for resolving the internal political crisis in Ukraine.

In addition, we have managed to draw the attention of the UN's humanitarian agencies to the situation in Ukraine's eastern regions.

There is a growing understanding that without an immediate de-escalation and cessation of military action, it will be impossible to avoid a full-scale humanitarian catastrophe.

RBTH: We know that Russia proposed a number of relevant initiatives at the Security Council in June.

V.C.: We have submitted two draft resolutions, both driven by the same philosophy: to put an end to violence; to start implementing the Geneva statement of April 17 and the roadmap proposed by the Swiss presidency of the OSCE; to alleviate the suffering of the population of eastern Ukraine.

Unfortunately, our numerous attempts to agree common approaches to these seemingly obvious tasks have been consistently obstructed by our Western colleagues on the Council, who, it appears, often are simply unable or unwilling to see, behind the screen of ideological dogmas and geopolitical games, the fate of an individual human being, be it somebody living in Ukraine, Libya, Iraq, or Yugoslavia.

Not only we but many of our colleagues on the Council were taken aback by the cynical position adopted by some of the delegations, which prevented [the UN from formally] condemning the attack on the Russian embassy in Kiev [on 14 June]. The lack of reaction from the UN Security Council to an incident like this is unprecedented.

RBTH: It appears that, compared with the Ukrainian events, Syria has faded into the background somewhat.

V.C.: Our impressions are different: Syria continues to be one of the top issues on the Security Council agenda.

It is symbolic that it was during Russia's presidency of the Security Council that the long-awaited news came from Syria: that all chemical weapons components had either been destroyed or removed from Syrian territory. Thus, the Russian initiative for destroying Syria's chemical arsenal has been fully implemented.

Experts: Rhetoric in Russian and Western media over Ukraine worse than during Cold War

We have continued to make active efforts to alleviate Syrians' suffering. A draft resolution is being prepared that would allow the UN's humanitarian agencies to use four checkpoints on the Syrian borders with Turkey, Iraq, and Jordan.

The Russian side has proposed an innovative approach to resolving this task, which would allow for trans-border supplies with agreement from Damascus, provided there is UN monitoring of humanitarian cargoes.

We hope that soon this draft resolution will be submitted for voting in a wording acceptable to all, excluding ultimatums to the Syrian authorities and ruling out even a hint of the use of force.

RBTH: The situation in neighboring Iraq has become very unstable and tense…

V.C.: The events taking place in that country, which until recently has been presented to the whole world as a model of the success of U.S. geopolitical engineering, have had a sobering effect on many.

The ease with which terrorists from the "Islamic State of Iraq and the Levant" are seizing more and more territory has highlighted an indisputable truth: The terrorist threat is a challenge to many countries in the region and it demands an urgent collective response.

There is a growing understanding that while terrorists are thinking "beyond borders", trying to set up a caliphate, the international community is at least one step behind them, still operating within national borders. As a result, shackled by political limitations, some capitals condemn terrorism in one country but in effect encourage it in another.

RBTH: How did the discussion of the situation in Afghanistan go?

V.C.: The initiative of the Russian delegation consisted in making a special focus on the tasks of combating the production and trafficking of Afghan drugs. It is common knowledge that this problem has developed truly horrific and global proportions and has in fact become a threat to international peace and stability.

It is on this premise that a statement from the Council President that has been agreed through our efforts is based.

The statement should become a guideline for all of us. Furthermore, it contains important Russian initiatives on the anti-drug front. It is important that an appeal has been made to international military contingents deployed in Afghanistan to support Kabul's actions aimed at tackling the production and trafficking of drugs.

This is unofficial translation. The interview is edited by RBTH.