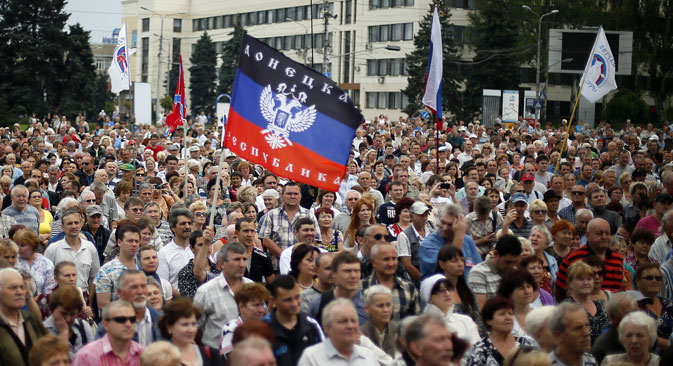 The confrontation in southeast Ukraine appears to be nearing its denouement. Last weekend government troops seized the rebel stronghold of Slavyansk as well as several nearby towns. Observers believe that the authorities in Kiev are now likely to ignore calls for a ceasefire and push on toward Donetsk and Lugansk.

Ukrainian government troops appear to be gaining the upper hand in the ongoing conflict with pro-autonomy militias in the east of the country. Last weekend the army made significant gains, wresting back control over the rebel stronghold of Slavyansk, which had become a symbol of resistance to the Kiev authorities, along with the nearby towns of Kramatorsk, Artemivsk and Druzhkivka.

According to representatives of the self-proclaimed Donetsk People's Republic, in the early hours of Saturday, July 5, the pro-autonomy militants managed to break out of the besieged city of Slavyansk, first retreating to nearby Kramatorsk before moving onwards to Donetsk. According to them, the withdrawal from the town was "a tactical maneuver necessary to concentrate forces and ensure successful the defense of Donetsk.”

During the two-month siege of the town of 110,000, the Ukrainian military cut off food supplies to Slavyansk as well as electricity and water supplies. As reported by the Russian daily Kommersant, citing residents of Slavyansk, the National Guard has been carrying out "mopping up" operations in the town aimed at finding potential saboteurs and identifying people who had cooperated with local pro-autonomy militia units.

Will there be a battle for Donetsk?

Independent Ukrainian pundit Dmitry Ponamarchuk says it is unlikely that the Kiev authorities, having captured one of the main rebel strongholds, will suspend military action.

"One should not forget that there is an influential group of hardliners in the president's inner circle. Even if Poroshenko wanted to choose a path of compromise, concessions and half-measures, those people would not allow him to do that, especially now," Ponamarchuk said.

He went on to add that a siege of Donetsk, with the use of artillery and aviation, would become a humanitarian catastrophe and result in numerous civilian casualties. That is why the battle for this new stronghold will follow the Slavyansk scenario: a siege, with main supplies to the city cut off and the civilian population evacuated.

According to independent military expert Viktor Litovkin, the town of Kramatorsk was captured by Ukrainian government troops because the local population had refused to support the local pro-autonomy militia and thereby subject the city to mortar fire by the National Guard.

"The same may happen in Donetsk: People may refuse to support the militia and prefer to surrender the city to the Ukrainian army in the hope of mercy. In the longer term, it is clear that a resistance militia cannot defeat a state machine, which is superior in numbers and weapons," Litovkin said.

He believes that Kiev plans to go on to the end and that the only way to stop the bloodshed is to step up political pressure from Paris, Berlin and Moscow.

"A peace treaty between the metropolis and the republics could follow the pattern of the 1996 Khasavyurt peace accord between the Russian Federation and Chechnya,” said Litovkin. “Under that agreement, federal troops were withdrawn from the territory of the republic and Chechnya in effect became an independent state with its president, borders and army. That accord put an end to the first Chechen war.”

The new round of contacts between the Kiev authorities and the separatists has been postponed several times already. After the news of Slavyansk’s recapture by government forces, the contact group on Ukrainian settlement issued a statement calling for specific urgent steps to resolve the crisis through peaceful means and the holding of another round of consultations as soon as possible.

Situation on the border with Russia

Russian customs officers report that shots and bursts of machine-gun fire are being heard from the territory of the self-proclaimed Lugansk People's Republic across the border, with mortar shells occasionally hitting Russian territory too. In one such incident early on July 4, several shells exploded at the Novoshakhtinsk border checkpoint in Russia's Rostov Region. In a similar incident there two weeks ago, a Russian customs officer was wounded.

According to eyewitness accounts, one mine exploded in a road, leaving a crater half a meter wide. By a lucky coincidence, there were no vehicles on that section of the road at the time, so no-one was hurt.