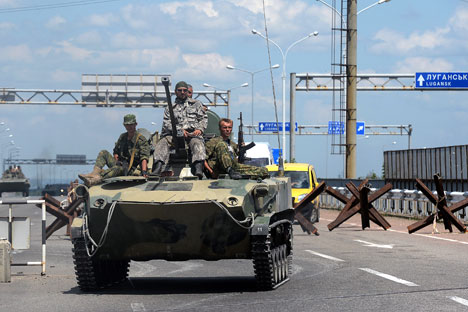 RBTH presents a selection of views from leading Russian media, featuring reaction to the Ukrainian Army’s seizure of rebel-held towns in the country’s east and news of operations to identify militia sympathizers in Slavyansk following the city’s recapture, as well as speculation on the future of the so-called “New Russia” project in Ukraine’s southeast in the light of Russia’s apparent withdrawal of support.

The newspaper Kommersant reports that the Ukrainian army is continuing its offensive against the breakaway militias of the so-called Donetsk and Lugansk people's republics, taking over several more towns and villages. The troops have occupied Kostiantynivka, Artemivsk, Druzhkiva, the town of Mykolaivka, and the Dolzhansky checkpoint. According to the newspaper, Kiev's primary objectives are “to destroy the training bases and militia checkpoints, to reestablish control over the state border, to isolate the conflict zone, and to demine roads, bridges, and buildings.”

More importantly, Kommersant notes, is the fact that the troops are planning to besiege Donetsk and Lugansk, with the aim of blocking off the militia's supply routes. The newspaper quotes the official statement made by the Russian Foreign Ministry, which reads that “Kiev's troops are destroying their own cities by employing a tactic that is rarely used even by occupation forces against their enemies.” Moreover, the document highlights that “it is pointless to, once again, demand that Kiev stop the attacks on civilian targets.”

Nezavisimaya Gazeta writes that the Ukrainian government is to consider a plan to reconstruct the ruined cities in the Donbass. So far, the plan includes settlements from which the Ukrainian army ousted pro-autonomy militia forces over the weekend. Currently, the conflict around Donetsk and Lugansk continues, the newspaper reports, and the outcome of this confrontation is not yet clear.

The publication also notes that the contact group that includes representatives from Ukraine, Russia, and the OSCE agreed on the need for a plan to immediately settle the conflict in a peaceful manner at their last meeting. However, the countries still cannot agree on a common vision of a “peaceful resolution.” Kiev demands that the militias lay down their arms, but the leaders of the self-proclaimed republics demand that Kiev withdraw all Ukrainian troops from the regions. “The federalization compromise proposed by Russia does not suit either side of the conflict, and the European Union and OSCE have limited themselves to calls for peace,” sums up Nezavisimaya Gazeta.

Vzglyad writes that indiscriminate raids have begun in captured towns in eastern Ukraine. After resting over the weekend, Ukrainian troops commenced “filtration activities” on Monday, the publication reports. According to some information sources, the entire male population of these towns is subject to inspection aimed at determining whether or not they aided the terrorists and took part in terrorist activities. According to Vzglyad, local residents have confirmed this information. In Slavyansk, the Ukrainian forces have started to arrest those who are suspected of collaborating with militia forces.

According to the newspaper, entry and exit from Slavyansk is limited; only people who have local registration papers are allowed to come through. “Overnight, all policemen were arrested and taken outside the city. All men between the ages of 25 and 35 have been arrested, regardless of whether or not they had taken up arms, and searches are being conducted. Those who helped feed the wounded are being targeted,” Vzglyad quotes the speaker of parliament for the Union of Lugansk and Donetsk People's Republic Oleg Tsaryov as saying. Meanwhile, in spite of the fact that the main militia forces have been ousted from Slavyansk, the newspaper reports that local confrontations continue outside the city. Experts note that “even Kiev propagandists admit that the capitals of the DPR and LPR will not be falling anytime soon.”

“The Russian patriot is confused. First, Vladimir Putin recalled his mandate on the invasion of the neighboring state, and now troops have been withdrawn from Slavyansk, the city that served as the symbol of the pro-autonomy militia forces. How does one explain what's happening in the potential New Russia to the Russian public?” wonders Gazeta.ru. According to the publication, there are three main options. The first, the newspaper reports, is that nobody has betrayed anyone and the militia forces will still be victorious. "The essence of this version is that there is a strengthening of defensive force in Donetsk and Lugansk, and that the Ukrainian army will suffer greater losses if it goes on the offensive there," the publication emphasizes.

The second version, according to Gazeta.ru, is that nobody in Russia “gave up on” the southeast, but “certain villains such as Strelkov [Igor, commander of the Donbass People’s Militia] made agreements with the Ukrainian military, obtained a corridor, and withdrew troops without suffering major losses, even though they had promised to die in Slavyansk.”

The third version is the most pessimistic one: “All is lost, the New Russia project is closed. The militia forces will not be getting support in terms of troops or arms. The Kiev government is winning slowly but surely, and all Russian patriots will soon be deeply disappointed.” Moreover, Gazeta.ru notes that “neither official propaganda nor the statists are giving a definitive answer regarding Russia's further course of action.”