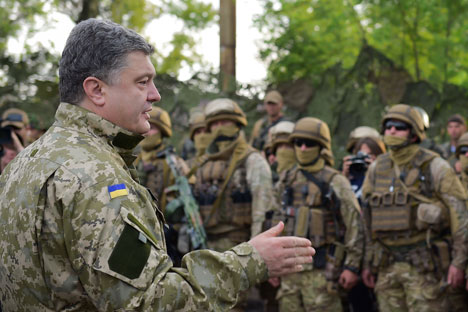 Poroshenko has approved a special military operations plan against Donetsk and Lugansk, involving the encirclement of the cities. Source: ITAR-TASS

RBTH presents a selection of views from leading Russian media, featuring criticism of Poroshenko’s apparent intention to complete the military campaign in eastern Ukraine, analysis of the humanitarian risks of an assault on Donetsk, and news of preparations being made to defend the city by pro-autonomy militants.

The Izvestia newspaper says that Ukrainian President Petro Poroshenko has approved a special military operations plan against Donetsk and Lugansk, involving the encirclement of the central cities of the two self-proclaimed people’s republics. The preparations for military action, say Izvestia, come amid Poroshenko’s statements about his readiness to seek a peaceful settlement of the conflict, and constant calls by Russia and the West for the Ukrainian Army to halt its military activities.

According to the newspaper, all this fully contradicts not only international humanitarian principles, but also the “promises that the Ukrainian leadership made during international forums, including the recent meeting in Berlin.” In addition, according to the expert, if the punitive operation in the southeast of Ukraine is not stopped, “then the militants will simply refuse to take part in any future talks.”

Izvestia writes that what is needed now is for representatives of Russia, Ukraine and other countries to meet in order to discuss ways out of the crisis, something that will finally “force the Kiev authorities in reality, and not just in words, to stop their punitive operation.”

Nezavisimaya Gazeta tells its readers that Petro Poroshenko keeps changing his tactics in eastern Ukraine, choosing to carry out “anti-terrorist, police, or even combined operations.” The publication has learned that Poroshenko has approved a new secret action plan for the Ukrainian military – this could mean that there are preparations underway for a decisive blow against the militants.

The expert at Nezavisimaya Gazeta surmises that active and concerted actions by the Ukrainian Army will enable the military part of the operation to be completed within a month, but stressed that this “will not solve the problem, if they do not simultaneously start political negotiations.” “Beautiful promises are difficult to implement: The constant firefights and explosions are not allowing residents to safely leave the zone of the anti-terrorist operations,” writes Nezavisimaya Gazeta. The publication cites the words of Donetsk mayor Alexander Lukyanchenko, saying that there are currently 900,000 people living in the city, and it is simply “impossible to evacuate this many people; plus, there is nowhere for them to go.”

In addition, Nezavisimaya Gazeta thinks that in Kiev they do not believe it is possible to find a peaceful settlement, via a compromise, to end the crisis, since the Ukrainian government “does not recognize the independence of the breakaway people’s republics and does not accept even the idea of federalization.” In the wider context of the apparent unwillingness of the parties to soften their positions, calls for a ceasefire and the start of negotiations are becoming all the louder, reports the newspaper. Even Kiev has started to take notice, according to Nezavisimaya Gazeta, of the fact that the Russian position is now being actively supported by Germany and France.

Rossiyskaya Gazeta reports that the leadership of the self-proclaimed Donetsk People’s Republic has declared martial law in the Donbass in areas adjacent to those where Ukrainian Army units are deployed. According to the publication, this will not apply to all of Donetsk, in order not to create problems for citizens. In addition, military commands will be created in the areas that are under the control of the militants. A statement to this effect was made by the Minister of Defense of the Donetsk People’s Republic Igor Strelkov. He also noted that the militants “do not want to have views imposed on them by people for whom this land is only an object of political games and a source of various speculations by forces that are under foreign control, and which do not really hide this fact.” Strelkov stressed that: “this is what we have been fighting against and will continue to fight against.” According to Rossiyskaya Gazeta, the Donetsk People’s Republic is to create a professional contract army.