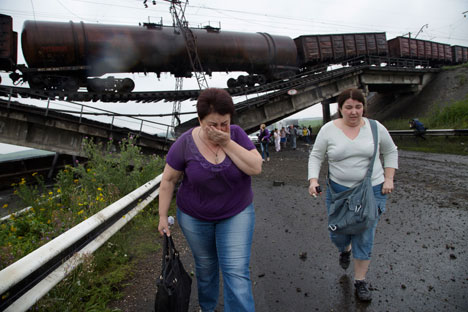 Railroad bridge was blown up in Donetsk region on July 8. Source: AP

RBTH presents a selection of views from leading Russian media, featuring predictions of the imminent collapse of Ukraine’s economy alongside reports on the current situation in the east of the country and the preparations for the defense of Donetsk.

Rossiyskaya Gazeta says that despite appeals made by German Chancellor Angela Merkel and French President Francois Hollande to call a ceasefire and settle the civil conflict using "political means," Kiev maintains that "there is no one to speak to about a peaceful solution to the Donbass conflict."

The newspaper writes that in response to "Europe's peaceful admonitions," Ukraine's Deputy Head of the Presidential Administration Valery Chaly said that "there has been no talk of any official negotiations," and that they are "inadmissible."

"So far Ukraine's national pride has not permitted Kiev to commence negotiations with the Donbass and Ukraine's national economy is already breathing its last breath," notes the newspaper. The government is having problems paying pensions, which means that in August Ukraine’s elderly will start feeling the consequences of the "anti-terrorist operations."

According to Rossiyskaya Gazeta, while "the country's economy is falling into an abyss, relying only on new credit, the ideology of 'Ukrainian-ness' is flourishing. The newspaper states that just one day ago the Cabinet of Ministers gave the Culture Ministry's Institute of National Memory the same status as that of the organs of executive power.

"This organization, which has collected a panel of Russophobe historians, was a consultative organ before, setting the "standards" of interpreting Ukrainian history and informing the local mass media how to report on it," writes Rossiyskaya Gazeta.

Nezavisimaya Gazeta states that a week-long lull in activity in eastern Ukraine, during which battles continued but the positions of forces did not changed radically, is drawing to a close. The newspaper foresees an intensification of activity from both the Ukrainian army and the pro-autonomy militias.

Another bridge blown up in Donbass

According to the newspaper, the militias have reproached Russia for not having assisted them. Earlier, the leaders of the self-proclaimed people's republics said that they would regroup and prepare themselves for a new round in the fight for independence, the newspaper reminds its readers.

The newspaper writes that the Ukrainian army has also received a new plan of action this week. "The sides are obviously preparing for a decisive clash. In Kiev they are saying that the armed conflict in the Donbass may come to an end in two to four weeks, as long as Russia does not interfere," sums up the newspaper. Nezavisimaya Gazeta believes that even if the Ukrainian Army, as its generals now promise, cleanses Donetsk and Lugansk in a month, fighting will not cease, but will enter a "partisan phase."

Expert magazine says that the self-proclaimed People's Republic of Donetsk has begun its long-awaited centralization of power. "The process is rather painful, however, the republic's authorities think that there is no other way to defend the capital of the Donbass," the magazine writes. According to Expert, the key objective now is the defense of Donetsk; should Ukrainian forces take this city, it will essentially mean the end of the republic.

The newspaper states that the pro-autonomy militias have enough weapons to defend the city for now and that volunteers are continuing to arrive, but that there are still not enough people to help with the defense. However, the republic's government hopes that soon the problem with the shortage of defenders will be solved, at least thanks to the funds that the republic now has available, which will enable the servicemen to receive good compensation. The republic's government aims to employ the militias on a contractual basis.

"If Donetsk really starts paying the militias, then, with all the unemployment problems in Donbas (which occurred partly because of the civil war, partly because of Russia closing its market to Ukrainian goods in the beginning of the year), there shouldn't be any difficulties finding military volunteers," remarks Expert magazine.

According to the magazine, the strategic situation remains complicated for the Ukrainian forces: Despite having taken several towns, the army still does not have a clear idea how to take Donetsk. "Everyone knows that time is not on Kiev's side," Expert emphasizes.

Relations are deteriorating with Russia, whom the Ukraine government is accusing of directly supporting the Donbass "terrorists." However, Expert does not exclude that gas negotiations will soon restart.

"Kiev's representatives will have to be very flexible with them, as regards to both the payment of debts and the continuation of anti-terrorist operations," the magazine concludes.