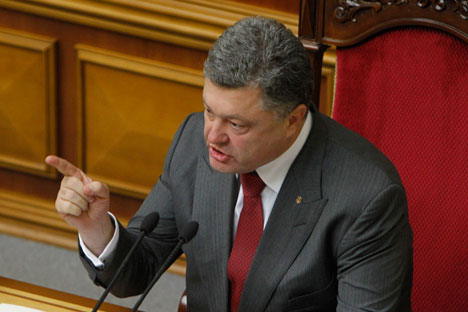 Ukrainian authorities have urged Europe to put pressure on Moscow to close the border to possible arms and equipment supplies to Ukraine. Source: Reuters

RBTH presents a selection of views from leading Russian media, featuring news of the possible clearance of the protest camps on Kiev’s Maidan, analysis of the incident in which a Ukrainian shell hit a Russian border town, and reports of a campaign in Ukraine’s southeast to gather information on ‘crimes’ committed by Kiev.

The newspaper Kommersant reports that the Ukrainian authorities are preparing a crackdown on protest camps in the center of the Ukrainian capital. Ukraine’s new leadership has launched an offensive on Kiev’s Maidan – the very force that brought it to power, Kommersant added.

The newspaper quotes a statement from Interior Minister Arsen Avakov, in which he declares that “true patriots and revolutionaries are fighting in the East, instead of occupying the center of the capital, for reasons that are unclear.”

Kommersant notes that opinions on the issue are split in Ukraine. Security forces claim that the Maidan should be broken up because it now serves as a hotbed for criminal activity. Meanwhile, Kiev’s mayor Vitali Klitschko and a number of other politicians believe that people should leave of their own free will.

According to the newspaper, Maidan participants responded to the threats by holding an assembly, where speakers warned the authorities that any attempts to break up the Maidan would be futile. “The Maidan should not be broken up under any circumstances. Doing so would be a big mistake for the new authorities, who were brought to power by the Maidan,” Kommersant quotes political scientist Victor Nebozhenko as saying.

The newspaper Moskovsky Komsomolets (MK) reports that after the unfortunate incident near the small border town of Donetsk in Russia’s Rostov Region, in which a man died and a woman was wounded as a result of shelling from inside Ukraine, discussions about whether or not Russia should be fighting fire with fire have become more serious.

The publication notes that on Monday, a number of media sources reported that the Kremlin is considering the possibility of executing a number of “pinpoint retaliation strikes” on Ukraine. President Vladimir Putin's Press Secretary Dmitry Peskov later denied the reports, saying that “reports about Russia considering the possibility of retaliation strikes are complete nonsense and not true.”

MK's analyst, however, is convinced that no political statements issued by Russia will stop the parties responsible for the shelling.

“They won't understand until we fight back. If no retaliation measures are taken, the situation will only get worse. Fighting will continue near the border, which is why it is absolutely necessary to respond quickly and forcefully,” the publication quotes Viktor Murakhovsky, chief editor of Arsenal of the Fatherland magazine and reserve colonel, as saying.

Nezavisimaya Gazeta writes about Kiev's statements claiming that Ukrainian military forces had nothing to do with the shelling of Russian soil. Kiev has expressed its readiness to cooperate on investigating the incident in the Rostov Region, the newspaper reports.

Moreover, according to Nezavisimaya, the Ukrainian authorities have urged Europe to put pressure on Moscow to close the border to possible arms and equipment supplies to Ukraine, as well as to volunteers coming from Russia. Petro Poroshenko is to provide Ukraine's European colleagues with evidence in the form of “documented facts of Russian equipment used to attack the Ukrainian military being illegally shipped across the border.”

Gazeta.ru, in turn, reports that Europe has finished preparing a new package of sanctions against Russia, but so far there is no consensus as to how the sanctions could be implemented.

“Uncertainty and endless promises of implementing restrictive measures might have something to do with why some European countries are hesitant to implement sanctions against Russia,” the publication suggests.

The absence of a consensus regarding the sanctions has resulted in finger-pointing. According to Gazeta.ru, Italy has been accused of slowing down the process of imposing restrictions.

The Italians deny such claims and say that they are in agreement with other EU members.

The newspaper Izvestia reports that information about crimes committed by Kiev is being gathered in the southeast of Ukraine.

According to the publication, Konstantin Dolgov, co-chairman of the New Russia Popular Front and head of the committee investigating crimes perpetrated by the Kiev regime, has announced that he has begun collecting information for a blacklist.

The newspaper explains that this is the term Dolgov's organization uses to refer to the dossier on key figures in the Kiev regime who issue criminal orders, as well as the people who carry them out.

The goal of compiling the information is to collect enough materials to present as evidence to the International Criminal Court, the paper notes.