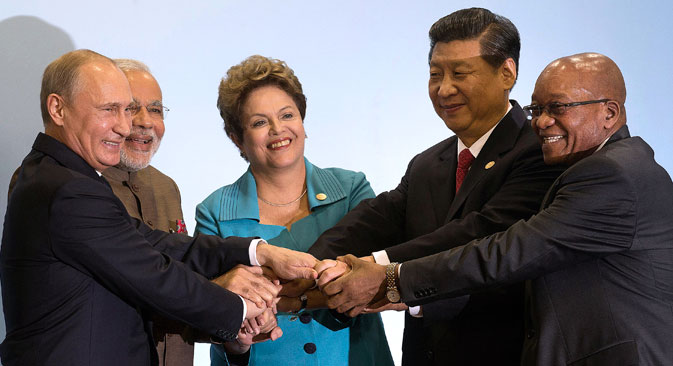 The launch of the developmental bank is being seen as a major step in bringing forth closer economic cooperation between the members of BRICS. Source: AP

Brazil, Russia, India, China and South Africa have declared the launch of the group’s developmental bank and currency fund in a joint statement made at the BRICS summit in Fortaleza, Brazil. The bank’s headquarters will be in Shanghai, while its first president will be from India and the first chair of the board of governors from Russia.

The leaders of the BRICS nations have launched their much-touted $100 billion developmental bank and a currency fund, in what is being seen as the most important economic measure taken by the grouping.

“We are pleased to announce the signing of the agreement establishing the New Development Bank (NDB), with the purpose of mobilizing resources for infrastructure and sustainable development projects in BRICS and other emerging and developing economies,” the leaders of Brazil, Russia, India, China and South Africa said in a statement made on July 15 at the BRICS summit in the Brazilian city of Fortaleza.

“Based on sound banking principles, the NDB will strengthen the cooperation among our countries and will supplement the efforts of multilateral and regional financial institutions for global development, thus contributing to our collective commitments for achieving the goal of strong, sustainable and balanced growth,” they added in the statement.

Russia to contribute $2 billion to BRICS bank over seven years

The developmental bank will have an initial authorized capital of $100 billion, with initial subscribed capital of $50 billion, equally shared among the five members. The headquarters of the bank will be located in Shanghai.

The launch of the developmental bank is being seen as a major step in bringing forth closer economic cooperation between the members.

“I am confident that closer cooperation between the BRICS states in the area of economy and finance will facilitate the implementation of really large-scale joint programs in the interests of the sustainable development of our countries,” Russian President Vladimir Putin said at the end of the conference.

The BRICS members also signed a treaty for the establishment of the BRICS Contingent Reserve Arrangement, which will initially be set at $100 billion.

“The agreement is a framework for the provision of liquidity through currency exchanges in response to actual or potential short-term balance of payments pressures.”

The contingent reserve fund “will help contain the volatility faced by diverse economies as a result of the tapering of the United States' policy of monetary expansion,” Brazilian President Dilma Rousseff told reporters in Fortaleza. “It is a sign of the times, which demand reform of the IMF.”

In the joint statement, the leaders said they “remain disappointed and seriously concerned” with the current non-implementation of the 2010 International Monetary Fund reforms.  They argued that the lack of reforms has negative impacts on the IMF’s legitimacy, credibility and effectiveness.

“The IMF reform process is based on high-level commitments, which have already strengthened the fund's resources and must also lead to the modernization of its governance structure so as to better reflect the increasing weight of EMDCs in the world economy.”

The leaders said the IMF must remain a quota-based institution.

Read more: BRICS does not have plans to form military-political alliance>>>