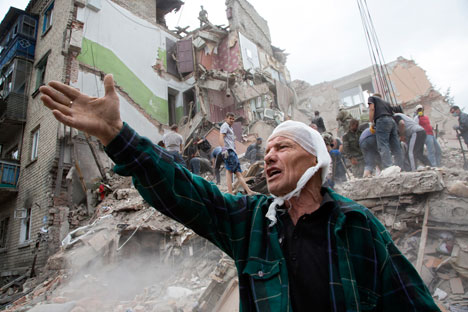 RBTH presents a selection of views from leading Russian media, featuring analysis of the question of whether or not Russia is supplying pro-autonomy militias in eastern Ukraine with heavy weapons, the new efforts being made by the EU and Russia to resolve the conflict, and concerns over Kiev’s potential to replenish its gas storage facilities before the winter.

The Kommersant newspaper said that Russia and Europe are looking for new ways to resolve the conflict in Ukraine. The newspaper reminds its readers that the conflict in the east of Ukraine has resulted in new clashes on the territories of the two breakaway “people’s republics” and that the most difficult situation has currently developed around the city of Snezhnoye (Ukr. Snizhne) in the Donetsk Region.

“In Lugansk and Donetsk, where the main forces of the militants are focused, the situation remains stable – the Ukrainian troops have not started storming these cities yet,” writes Kommersant.

Moreover, according to the newspaper, the leaders of the military operation have decided to abstain from using aircraft after pro-autonomy militants shot down two airplanes of the Ukrainian Air Force.

The escalation of the Ukrainian conflict, emphasizes Kommersant, has intensified attempts to broker a ceasefire and start a political settlement process under international mediation. According to the newspaper, the most active role on the EU side is being played by Germany, which has supported Moscow’s proposal to place OSCE observers on the Russian-Ukrainian border. With reference to the statement released by the Russian Foreign Ministry, Kommersant notes that the United Kingdom and some other countries are hindering the implementation of this initiative.

“Against the background of an increasingly obvious division in Europe on the Ukrainian question, the U.S. is stepping up pressure on Russia, accusing Moscow of supporting anti-government forces in Ukraine,” the newspaper writes by way of concluding its analysis of the current situation of the crisis.

“Ukrainian and Western media continue to claim that Russia is allegedly providing military assistance to the militants of Novorossiya [literally “New Russia”, a historical term denoting an area north of the Black Sea, presently part of Russia and Ukraine; the term is also being used to describe the separatist entity in south-eastern Ukraine],” writes Nezavisimaya Gazeta.

The newspaper reports that Moscow is mainly being accused of supplying heavy and state-of-the-art weapons systems to Donetsk and Lugansk. However, no tangible evidence has been presented yet,” said Nezavisimaya Gazeta, and “everything comes down to unfounded attempts to explain the serious losses being suffered by the Ukrainian Army.”

“However, let us ask ourselves: What information, evidence, or proof of such processes is actually possessed, or on the contrary, not possessed by the U.S.?” asks the newspaper.

According to the anonymous source of Nezavisimaya Gazeta at the Main Intelligence Directorate (GRU) of the Armed Forces of the Russian Federation, the Americans are almost continuously monitoring the border areas between Russia and Ukraine from outer space. The resolution capabilities of the equipment on their satellites, the expert reports, allows the Americans to accurately determine the kind, type, and even modification of military hardware located in the region. “And to pinpoint the exact location and time of crossing of the border of any combat vehicles presents no problems,” the newspaper quoted the expert.

However, until now, not a single photo or e-location showing the penetration of military equipment from Russian territory into Ukraine has been provided by anyone, stresses the newspaper. In addition, Nezavisimaya Gazeta writes that “these persistent allegations of the Americans against Russia have been transformed into repeated over-exaggerated lies coming from Ukrainian government officials and media.”

Gazeta.ru says that the European Commission is concerned about the insufficient filling of Ukrainian natural gas storage facilities. The publication notes the concern of European officials that Ukraine is unlikely to replenish its underground natural gas storage facilities, if Kiev does not manage to negotiate new gas prices with Moscow, which will lead to the disruption of transit supplies to Europe during the upcoming winter.

Experts, writes Gazeta.ru, are warning that without Russian gas, Ukraine will have to severely restrict consumption, which may lead to increased social tensions or illegal connections to siphon off gas from transit pipelines. Gazeta.ru reminds its readers that due to unpaid debts, Gazprom has placed Ukraine on a pre-payment regime. Naftogaz of Ukraine is no longer getting any Russian gas, and only transit gas for Europe is being sent through Ukrainian territory. However, according to the newspaper, the EU has no plans to pay Ukraine’s debts. Earlier, gas industry experts suggested that Moscow was actually trying to push Europe to do just this, notes Gazeta.ru.

“The Ukrainian authorities have two options – either start bleeding off gas destined for Europe, or introduce more stringent restrictions on the consumption of natural gas. It is difficult to say how ready the Ukrainians will be to freeze in the coming winter, for the victory of democracy,” Gazeta.ru quotes Konstantin Simonov, head of the National Energy Security Fund of Russia, as saying.