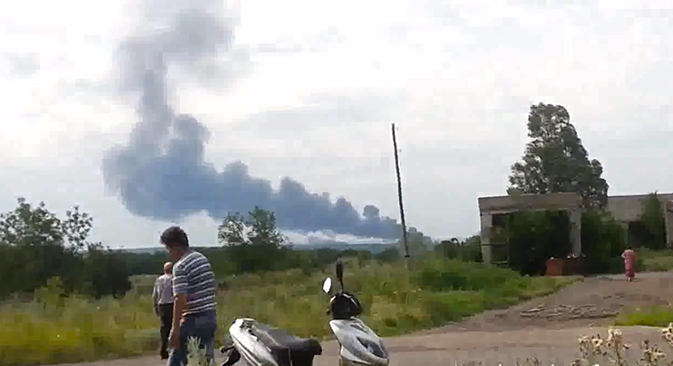 Malaysia Airlines plane en route from Amsterdam to Kuala Lumpur, crashed near the town of Torez and the village of Snezhnoe in the Donetsk Region of Ukraine. According to preliminary data, 295 people were on board the crashed Boeing-777.

A Malaysia Airlines passengers jet flying from Amsterdam to Kuala Lumpur was shot down July 17 in the Donetsk Region of eastern Ukraine. There were 280 passengers and 15 crewmembers onboard the Boeing 777. There were no survivors. Both pro-autonomy militias and the Ukrainian military deny involvement in the tragedy.

The Malaysia Airlines plane crashed roughly 50 miles from Donetsk, near the village of Snezhnoe. Ukrainian newspaper Ukrainskaya Pravda reported that connection with the plane was lost when it was at an altitude of 30,000 feet within the international transportation corridor over the country.

Malaysia Airlines confirmed that it had lost its connection with the airliner in Ukrainian territory approximately 30 miles from the border with Russia.

Reuters reports that the plane strayed off its course before crashing.  The wreckage is scattered over an area a little less than one mile.

In a statement on his official website, Ukrainian President Petro Poroshenko said that the Ukrainian miltary had no part in the tragedy.

“We stress that the Armed Forces of Ukraine did not take action against any airborne targets,” the statement reads. The president also noted that he had issued an order to create a special commission to investigate the incident.

Ukrainian Deputy Interior Minister Anton Gerashchenko said that the plane was shot down by a Buk missile. According to the Ukrainian armed forces, the pro-autonomy militias possess Buk launchers.

In turn, spokesman for the Donetsk People’s Republic Sergei Kavtaradze told Russian news service Interfax that the militias had nothing to do with the tragedy. “The plane was shot down by the Ukrainian side. We simply don’t have such antiaircraft weapons. Our MANPADS can shoot 3,000-4,000 meters (9,000-13,000 feet), but Boeing planes fly much higher than that,” Kavtaradze told Interfax.

The militias said they are willing to allow international experts in to investigate the causes behind the crash. “The government of the Donetsk People’s Republic is interested in investigating the circumstances of the tragedy and is willing to admit international experts to ascertain all the circumstances of the incident,” said Alexander Borodai, the prime minister of the Donetsk People’s Republic, in a statement to Interfax.

Malaysian Prime Minister Najib Tun Razak said on Twitter that he is in shock. “I am shocked by reports that an MH plane crashed. We are launching an immediate investigation,” he tweeted.

Meanwhile, the Malaysian defense minister is not confirming reports that the plane was shot down. The country’s military has been instructed to investigate the matter.

According to a statement on the Kremlin website, Russian President Vladimir Putin spoke with his U.S. President Barack Obama about the crash. The Kremlin statement also said that Putin had expressed his sympathy to the Malaysian prime minister.

“The head of the Russian government sends his most sincere words of sympathy and support to the families and friends of the victims,” the statement reads.

The United Nations have called the crash a tragedy. “We have seen reports of a Malaysian Airlines plane crash near the Russian-Ukrainian border. We do not have more information on this subject currently. This is a tragedy, and all our thoughts are with the fate of the passengers, crew, and their families," the UN’s Deputy Secretary General Spokesman Farhan Haq said, according to ITAR-TASS.

Russia’s Permanent Representative to the UN Vitaly Churkin also weighed in on the tragedy. “I’ve just learned of it. This is horrible. Of course, I don’t know anything about the incident yet,” he said upon returning from a Security Council meeting. The Security Council members have not yet discussed the crash, he said. Meanwhile, diplomats say the Security Council could convene again today.