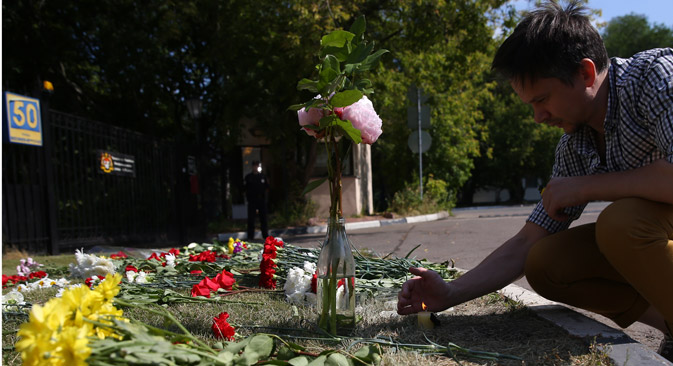 The shooting down of Malaysia Airlines flight MH17 over south-eastern Ukraine on July 17 generated fevered and emotional reactions on Russia’s social media networks. Angry accusations, conspiracy theories and sympathy for the victims' relatives and friends - all this inundated the country’s online communities on the evening of July 17.

The first announcements on Russian social networks after the Boeing catastrophe were purely emotional. People shared links of their first reactions to the catastrophe, providing short comments such as "horror," "nightmare," "my condolences," as well as uncensored comments aimed at those responsible for the crash.

Social media users immediately tried to work out the causes of the catastrophe and determine the culprits of the tragedy. Following the mass media, they started blaming first the Donetsk militias, then Ukraine, then Russia.

"So, you see what you've done, morons?" wrote Yekaterinburg mayor and opposition figure Yevgeny Roizman on his Twitter account – though he did not specify who exactly he was addressing (Yekaterinburg is Russia's fourth largest city).

The social networks discussed theories involving the passenger plane being shot down with BUK anti-aircraft missiles by the Donetsk militias and by the Ukrainian Army, as well as a Twitter message in which a man claiming to be a Spanish aircraft dispatcher from Kiev’s Borispol Airport said that three minutes prior to the crash, the Boeing 777 was being accompanied by two destroyers from the Ukrainian Air Force.

"It seems that a new Bermuda Triangle has appeared on the world map. There are so many explicit lies and rumors that await us in the guise of theories," wrote journalist Stanislav Koucher on his Facebook page.

Many social network users noted the similarity between the Malaysian airliner crash and the Lockerbie Boeing 747 crash in December 1988, when a London-New York flight exploded in the sky above Scotland as a result of a bomb placed onboard by Libyan terrorists. "It is our Soviet Lockerbie," tweeted journalist Oleg Kashin. 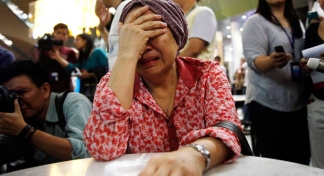 Others remembered the catastrophe of October 4, 2001, when a Ukrainian S-200 anti-aircraft missile shot down a Siberia Airlines passenger plane that was heading from Tel-Aviv to the Russian Black Sea port of Novorossiysk. It was assumed that the plane had been shot down due to a mistake made by an anti-aircraft technician during a drill.

"I was no less embarrassed for Ukraine when its valorous soldiers and mass media clearly lied about the shooting down of the Siberia TU-154 over the Black Sea and then got into ugly legal battles about compensation," Moscow State University professor Anatoly Khodorkovsky wrote on his Facebook page.

Conspiracy theories also received lots of attention. On all the social networks there appeared a photograph comparing the livery of the Malaysian Boeing to that of Russian “flight number one”, President Putin's plane.

Reaction to the Malaysia Airlines disaster in Ukraine

Users remarked on the similarity of the planes’ markings and speculated that perhaps the Ukrainian Army had been attempting to shoot down Putin’s plane. Some users wrote that the two flights had crossedat the same point over Poland not long before the crash.

Many network users said that the Malaysian Boeing crash will become the turning point of the situation in south-eastern Ukraine.

Condolences to the victims' families also flooded the social networks. Several bloggers invited people to bring flowers to the Dutch and Malaysian embassies in Moscow, providing their addresses. The first flowers had already been brought by the evening of July 17.

Journalist Sergei Lesnevsky, like many others, made it clear that he considered that none of the parties involved were free of blame, invoking the image of a passer-by waylaid by street bullies.

"I don’t care if the missile was launched from Kiev or from Donetsk or from Lugansk. Regardless of their war games and partitions, this is still all Ukraine, in one way or another,” wrote Lesnevsky on his Facebook page.

“This is a case of some jubilant hooligans from both sides of a street fight attacking an innocent bystander out of inertia – just because he stepped into the crossfire."