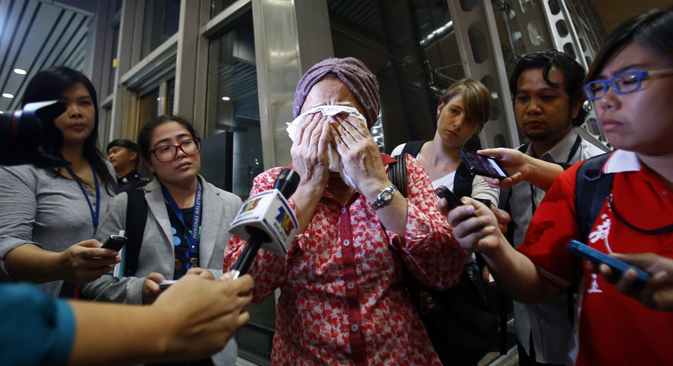 TV journalists try to interview a crying woman as she waits more information about the Malaysian Boeing 777 after it was shot down. Photo: Reuters

The tragedy of the downed Malaysian Boeing 777 is turning into a global PR nightmare for the Kremlin. As the situation in Ukraine transforms into front-page news around the world, Russia Direct presents a roundup of how journalists in both Russia and the West have covered this event.

The July 17 Malaysian plane tragedy has outraged the world. It risks upping the ante in the confrontation between Moscow and Washington and puts the Kremlin in a very vulnerable position as it attempts to explain its role in Ukraine.

The global media reacted to the incident immediately by blaming the Kremlin for the tragedy and suggesting that Russian journalists had totally failed to cover the story in a timely manner and with due responsibility. As if to underscore that point, Russian state-run TV immediately responded to the accusations from the West with numerous conspiracy theories and propaganda-like rhetoric rather than serious reporting.

Kommersant paid attention to the reaction of Western media (including tabloids) to the crash and published their front pages in its Facebook account while running some headlines and quotes from these newspapers: “There’ll Be Hell to Pay: 295 Dead – Up to Ten British – as Airliner is Downed”; “Ukraine’s rebels blamed – U.S. says that Putin’s involved” (Daily Mail), “Putin’s Missile: Flight MH17 Shot Out of Sky” (The Sun), “The Murder in the Sky: Missile Destroys Jet and Kills 295” (The Guardian) and others. In fact, Kommersant presented different versions of the tragedy proposed by its foreign counterparts with all their diversity and pluralism.

However, as the Guardian article suggests in its headline, the Malaysian Boeing incident “dominates pages from newspapers around the world, but not in Russia.” The British newspaper also points to the increasing number of conspiracy theories overwhelming Russia's social media and TV.

Even the highly respected Vedomosti is criticized for running a story on U.S. sanctions against Russia instead of focusing on the MH17 incident – what The Guardian regards as “a strange editorial decision or a conscious plan to play down an attack that much of the world was already linking to Russia.”

Likewise, Radio Free Europe / Liberty directs its criticism at Russia’s state-controlled TV, arguing that, “Russian state television scrambled to get out versions of the story that pointed in every possible direction – except toward Russia and the pro-Moscow militants fighting in eastern Ukraine.”

The Guardian invited Pussy Riot’s Maria Alekhina on its op-ed page to lambast Russian media in “covering up Putin’s complicity in the MH17 tragedy” and The Sunday Timesoffered space in its opinion section to UK Prime Minister David Cameron, who sees the MH17 incident as “an outrage made in Moscow” that shocked him and “will never leave” him. Meanwhile, The New York Times gives voice to Timothy Garton Ash, a professor of European studies at Oxford University, a senior fellow at the Hoover Institution and author. Foreign Policy magazine turned to Mark Galeotti, the professor of global affairs at New York University.

Ash describes the Boeing tragedy as being the result of “Putin’s deadly doctrine” to protect Russians in Eastern Ukraine and “hypocrisy on an Orwellian scale.” He sees Russian TV coverage of the event as “a massively mendacious narrative.” Galeotti argues the MH17 disaster “poses the greatest challenge yet for the Kremlin in its months-long covert war in Ukraine, one likely to bring the war to a close soon – if not without more bloodshed.”

Framing MH17 from a different angle

Meanwhile, some Russian newspapers attempted to offer another interpretation of the MH17 downing. Maksim Kononenko, a columnist for the pro-Kremlin newspaper Izvestia, sees the incident as a “provocation” against Russia, as indicated from the headline of his column, “The chronicle of a widely publicized provocation.”

Shortly after the tragedy, Kommersant FM radio gave voice to the Head of Russia’s Civil Aviation Commission, Oleg Smirnov, who shifted responsibility for the MH17 crash to Kiev: He pointed out that Kiev pledged to guarantee security at the height of no lower than 7,000 meters in response to EU requests. “Ukraine in this case has been reckless,” Smirnov said, strongly criticizing Kiev for allowing flights over its dangerous airspace. 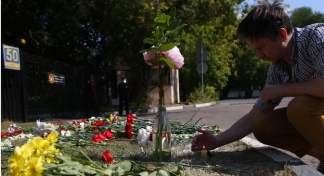 The next day Kommersant invited Ukraine’s side for an interview, in the form of Sergei Sobolev, the leader of Ukraine’s Batkivshchyna Party. He shifted responsibility away from the Ukrainian army, which, according to him, doesn’t have the weapons that could reach the Boeing, and, instead, blamed Russia and Putin for supporting “terrorists,” who  “obviously” shot down the jet, as he believes.

Will the Kremlin be able to tackle the MH17 publicity nightmare? What other opinions are global media offering? What are the implications of MH17 for Russia and Ukraine? Read the comments from both Russian and U.S. experts to make sense of it all at Russia Direct.