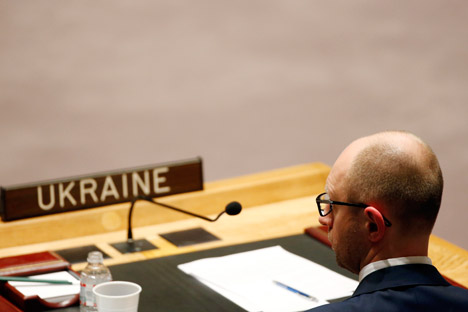 RBTH presents a selection of views from leading Russian media on the latest developments in Ukraine, featuring analysis of Prime Minister Arseny Yatsenyuk’s sudden resignation and the possible next moves for President Petro Poroshenko.

The Kommersant daily writes that Ukraine is "threatened by government collapse": In one day the majority coalition fell apart and Prime Minister Arseny Yatsenyuk announced his resignation.

"The resignation of Arseny Yatsenyuk, who was one of the key figures in the new Ukrainian government and who had the West's almost unconditional support, has provoked an intense political crisis," says the newspaper. The alliance between the Prime Minister and President Petro Poroshenko, which, according to Kommersant, was forming in the last weeks, has cracked.

Many experts surveyed by the newspaper think that "Yatsenyuk's demarche means that he is virtually moving to the opposition." However, other specialists adhere to a contrary point of view: "It is his recent allies from the UDAR party that have dealt him the blow," those who initiated the breakdown of the governing majority in Ukraine’s parliament, the Verkhovna Rada.

The Prime Minister has just turned out to be in the same boat as the head of state. For this reason, Kommersant does not exclude that Yatsenyuk may lead the Solidarnost party at the parliamentary elections that are likely to be called for the fall.

Now, in the midst of military operations in the east and a financial crisis, and practically on the threshold of an election campaign, the present situation, notes the newspaper, could throw the country into a state of anarchy. "All that is happening now raises doubt about whether Poroshenko will be able to remain president for the entire five-year term," Kommersant writes.

"The dissolution of the governing coalition in Ukraine's Verkhovna Rada paves the way for early parliamentary elections in this disintegrating government. Why must President Poroshenko hold elections in a warring country?" This is the question raised by Vzglyad newspaper. It writes that while war is raging in eastern Ukraine, the oligarchs are continuing to fight for power in Kiev.

Even before being elected, President Poroshenko expressed his desire to re-elect the Rada, Vzglyad reminds its readers.

"And this is understandable, since he does not have his own faction in parliament, while counting on a long-term union with Tymoshenko is out of the question." All these considerations, writes the newspaper, would be fine during times of peace; but there is currently a war in Ukraine.

According to Vzglyad, martial law has not been officially proclaimed “because in that state the country cannot hold elections,” but Poroshenko is convinced that he will be able to defeat the pro-autonomy militias without the formal imposition of martial law. Holding elections in times of war and while the country is threatened with collapse, according to the newspaper, is the height of madness.

Vzglyad writes that Poroshenko, like all the participants in the fight for power in Kiev, must consolidate his new position. But instead of thinking about whether Ukraine will survive to the middle of autumn, everyone’s focus is on how to crush their opponents. Vzglyad remarks that the Rada elections in themselves will be just another mad act in the overall drama of the Ukrainian government's collapse.

Expert magazine writes that President Poroshenko, as was expected, has begun dissolving the Verkhovna Rada. "And the Prime Minister's simultaneous resignation is an unpleasant surprise for someone," writes the magazine. The country is virtually left without the reforms to which certain sacrifices have already been made.

"The breakup of the parliamentary coalition is the official confirmation of the collapse of the government's policy, which is based on incompetent and irresponsible decisions," Expert quotes Sergei Tiginko, leader of the Strong Ukraine party, as saying.

According to the magazine, the country will now be without a viable Verkhovna Rada for a few months. It appears that the parliament's new formation will better reflect the current mood of Ukrainian society, Expert writes.

Of course, if it was up to the president, notes the magazine, he would hold elections immediately; however, the law forbids it. According to juridical norms, the deputies have a month to form a new majority.

Expert thinks that the chances of doing this are not great. Such a delay in holding elections creates a problem for the president: The government must resolve the issues with the self-proclaimed Donetsk and Lugansk people's republics before the election campaign.

"Probably this is the explanation for passing the new law on partial mobilization, which has caused such a negative reaction among the Ukrainian population," Expert says.

The magazine notes that there have been rumors about "the president wanting to take Donetsk and Lugansk by the end of August at all costs." Yet some, Expert underlines, have already made it clear that they are not willing to do it at "all costs": Arseny Yatsenyuk has "simply decided to jump off the bandwagon before it crashes, so that no one would hold him responsible for the crash."