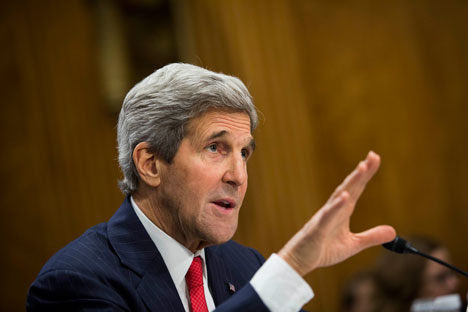 John Kerry does not believe the Russian Foreign Minister’s claims that Russian heavy military equipment was not involved in the events in eastern Ukraine. Source: Getty Images / Fotobank

RBTH presents a selection of views from leading Russian media on the latest developments in Ukraine, featuring reports on restrictions on dairy imports, calls for Russia to be stripped of the 2018 World Cup, reports of a lawsuit being prepared against Vladimir Putin, and analysis of the United States’ efforts to contain ‘the Putin Doctrine’.

The Kommersant newspaper analyzes the actions of U.S. congressmen who have come forward with an initiative to recognize Ukraine as the United States’ largest non-NATO military ally. This would augment its military-technical cooperation with Washington as the military operation continues in the east of the country.

The experts interviewed by the publication think that “Ukraine can count on limited help from the U.S., which may amount to nothing more than the dispatch of military advisors and the expansion of the list of equipment supplied.” At the same time, Kommersant’s experts note that “by giving Kiev the status of a special partner, the United States increases its pressure on Moscow.”

“Russia may replace Ukrainian cheeses with Belarusian or European ones,” declares the paper Vedomosti. The publication analyses the announcement from consumer protection watchdog Rospotrebnadzor concerning a temporary restriction on supplies of milk and dairy products from Ukraine.

While in 2013 federal agricultural watchdog Rosselkhoznadzor detained 37 shipments “of poor quality and dangerous” Ukrainian dairy products, 196 have already been detained in the first half of the year, Vedomosti writes, referring to the watchdog’s webpage. The publication also cites the Ukrainian Minister of Agrarian Policy and Food Igor Schweich, who has announced in turn that the products falling under ban or import restrictions into Russia had no banned substances in them.

Gazeta.ru cites a quote posted on the Facebook page of the head of the Ukrainian Ministry of Internal Affairs, Arsen Avakov, calling for Russia to lose the right to hold the World Cup in 2018. The publication also refers to an announcement made by the Ukrainian minister in support of the UK Deputy Prime Minister Nick Clegg’s call for Russia to be deprived, in the form of a sanction, of the right to host the 2018 World Cup.

“According to Clegg, Russia’s behavior is beyond the pale and if it is allowed to host the championship, the rest of the world will show itself to be weak and hypocritical!” announced Avakov, proposing that the British host the world championship in the conclusion of his text.

Nezavisimaya Gazeta, referring to the Echo Moskvy radio station, writes about the discussions of diplomats published on the eve of the release of satellite imagery “that supposedly shows that the attacks on Ukrainian territory originated in Russia.” According to the U.S. State Department, the U.S. Secretary of State, John Kerry, does not believe the Russian Foreign Minister’s claims that Russian heavy military equipment was not involved in the events in eastern Ukraine.

Novaya Gazeta, reflecting on the cover of the latest issue of Time magazine, analyzes America’s actions and its attempts to withstand the “new Putin Doctrine.”

Excerpts from an interview with the Arizona senator John McCain by one of the magazine’s journalists are quoted in the article. McCain does not believe that the downing of the airplane “will fundamentally change the West’s attitude towards the Russian authorities. In any case, Europeans will not do anything as long as they are still dependent on Russian energy. No one learns from the lessons of history, from what happened in the 1930s.”

The author of the material notes that the “events in Ukraine, starting with Crimea, have set a serious choice before the West, the most serious one since the Cold War, and everything now depends on the notorious Transatlantic unity.” But, referring to the American press, he states that the Europeans are not prepared to enter into confrontation with Russia to the same extent as Washington.

Moskovsky Komsomolets writes about how British lawyers from the London legal firm McCue & Partners are exploring the possibility of filing a class action lawsuit against Russian President Vladimir Putin in connection with the downing of MH17.

As the publication notes, “the defendants in the lawsuit may be high-placed officials in the Ministry of Defense and politicians close to the Russian president.”

Last week employees of McCue & Partners visited Ukraine, where they discussed the proceedings and a possible place for the claim to be filed. The families of those deceased will be given the chance to join this action.

Read more: Russian Ambassador to the UK: Only a collective effort can resolve common problems>>>