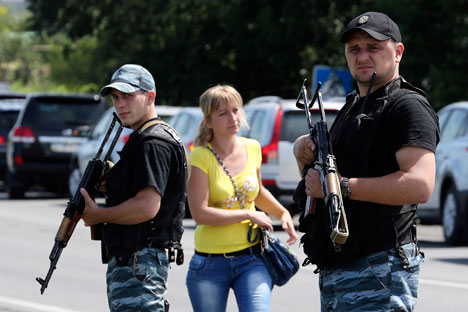 RBTH presents a selection of views from leading Russian media on the latest developments in Ukraine, featuring analysis of the increasingly serious losses being incurred by Kiev in eastern Ukraine, as well as further discussion of the U.S. proposal to offer the country a special ally status, and news of plans to introduce licensing for Russian books in Ukraine.

“The adoption of a bill offering Ukraine status as a main U.S. ally outside NATO could cause a sharp escalation in the military operation in the east of the country,” the newspaper Vedomosti reports, citing experts.

In the newspaper’s opinion, if the U.S. adopts the bill, it will be able to participate “in joint defense initiatives and counter-terrorist activities with Ukraine, as well as supply Kiev with limited types of weapons.” Ukraine will not be able to become a member of NATO “even in the case that it declines to accept status as a non-bloc state,” Vedomosti writes. This is because Kiev refuses to recognize Russia’s annexation of Crimea, and the NATO charter prohibits states with territorial claims against other countries from joining the alliance.

Furthermore, Vedomosti cites CNN as reporting that Ukrainian President Petro Poroshenko has already asked the U.S. for non-NATO ally status. According to political scientist Boris Makarenko, the bill is an attempt by Congress to put pressure on the executive authority.

“If Kiev receives main ally status, this will mean that other NATO countries will start to openly provide weapons and machinery to the Ukrainian Army, which is conducting an operation in southeastern Ukraine,” Vedomosti reports.

Eighty percent of books in Ukraine are produced in Russia, Sych said, and therefore Ukrainian books need to be saved from excessive Russian imports. Russian publishing houses will not be represented at the Lviv Publishers’ Forum from September 11 to September 14, and books published in Russia will be specifically indicated as such.

Kiev is expecting to change several provisions to a 10-year contract for gas transit through Ukraine, Moskovsky Komsomolets reports.

According to the publication, “former head of the management board of Ukraine’s Naftogaz, Andriy Kobolev, threatened that if Russia’s Gazprom refuses to negotiate changes to the transit contract, the Ukrainian state holding will appeal to the Stockholm arbitration court.”

Several rounds of negotiations have produced no results except mutual lawsuits at the Stockholm arbitration court. Naftogaz is demanding $6 billion from Gazprom in overpayment for blue fuel, while the Russian gas producer is demanding $4.5 billion from Naftogaz for gas that was supplied but not paid for, the newspaper reports.

“The number of casualties in the Donbass is increasing rapidly among both the warring parties and civilians,” Nezavisimaya Gazeta reports.

“The data published on Monday by the UN Office of the High Commissioner for Human Rights can be considered the most complete and sufficiently close to the real number of losses,” the newspaper writes.

Citing the UN report, Nezavisimaya Gazeta writes that “the human rights monitoring mission and World Health Organization believe that the total number of deaths in Ukraine in the period from mid-April to July 15 is at least 1,000.”

“Throughout the entire period of the anti-terrorist campaign, 325 Ukrainian servicemen have been killed, and 1,232 have suffered injuries of various levels,” the newspaper reports, citing head of the NSDC Information Analysis Center of Ukraine Andriy Lysenko.

“Some people are calling the documents forgery. Other people consider it flawless confirmation of the collapse of Kiev’s military operation in the east,” the newspaper writes.

According to Nezavisimaya, confirmation of the major blows being sustained by the Ukrainian armed forces came on Monday evening when news channels reported new losses incurred by the Ukrainian Army during fighting near the city of Lutugino.