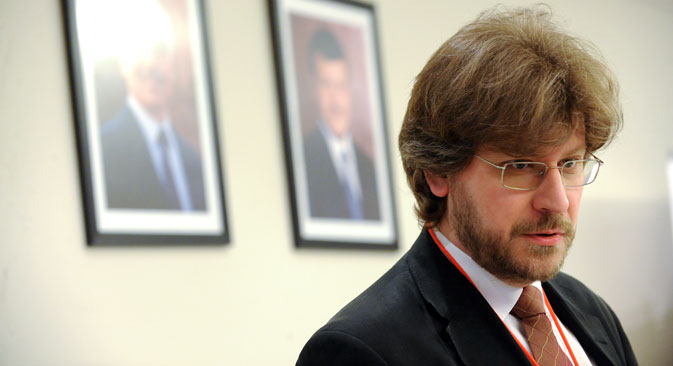 Not since the Cold War has Moscow been subjected to such pressure from the West. In the European and U.S. media, Russia’s image and the character of its president Vladimir Putin are being unreservedly demonized. Fyodor Lukyanov, head of the Council for Foreign and Defense Policy, discussed the situation and assessed Russia’s options in an interview with news website Lenta.ru.

There is a point of view that says Moscow needn't adapt itself to the discrimination from the West because the current sanctions are unpleasant, but not fatal. Is such an approach valid?

Sanctions are of course not fatal. However, in the case of their full-fledged introduction - that is, sector-wide sanctions against entire industries - they will significantly sour the economic situation and necessitate arranging an entirely new model of development.

In my opinion, such a model does not yet exist, and a response mechanism to a serious economic blockade from the West has not been developed.

Russia's developmental specificities have left it with an economy that is not so deeply immersed in the global economy when compared to countries such as China. However, Russia is still bound very closely to global markets and especially to Europe, so it would be a bad idea to disregard the sanctions as nothing. I also would not bank on Europe's “greed.”

Without a doubt, sanctions against Russia would be horrendously disadvantageous, but the pressure from the United States has been very strong, and the informational situation surrounding Ukraine and the downed Malaysia flight has become extremely harsh. The international media has practically made Russia a rogue state, and I cannot remember a more powerful information assault.

In other words, there is no cause for panic, but one must consider that Russia has not found herself in such a serious political, economic, or informational confrontation in all the years since 1991.

Is a “turn to the East” possible? Could closer ties with China and the other BRICS countries compensate for the spoiled relationship with the West?

To some degree, yes. But this would require very active work; we would need to seize the initiative and be highly assertive. Russia does not expect the BRICS or any third world countries to support its struggle against the Ukrainian government. They are not interested.

The fact that Russia's actions led to the changing of internationally recognized borders could also be taken as support for separatism on the territory of a neighboring state. Such behavior is not consistent with what China, India, or other developing nations consider to be suitable in international relations.

At the same time, it is understood in Beijing, New Delhi, Brasilia, Pretoria, Tehran, and Buenos Aires that Russia's actions had an extensive pre-history. Furthermore, it is recognized that Russia acted in response to pressure from the West, which heedlessly, unceremoniously, expanded its sphere of influence.

These countries will accordingly not join Washington's chorus of those condemning Russia. In China, for example, the ‘battle for Ukraine’ is not considered a local conflict, but a confrontation over the structure of a new global hierarchy. Russia's defeat would mean the strengthening of the U.S. and increased pressure on China. Thus, a certain amount of support is guaranteed.

What exactly is the West trying to achieve through all these new sanctions?

They are seeking to curtail any support for the pro-Russian forces in Ukraine. This is the immediate goal, as it is important to the U.S. that Kiev achieves a military victory. Such a result is probably inevitable if Kiev secures the border with Russia.

This will not settle the Ukrainian crisis, of course. Resistance of some form or another will continue: instability, but with the territory generally under the control of the Ukrainian authorities.

The West's more long-term goal, about which they do not speak publicly, is - I believe - a change in Russia's domestic political situation, and regime change, if possible. After all that has happened this spring and summer, normal interactions between Washington and Moscow at the higher levels are, in my opinion, impossible.

Impossible not only for Obama, but in all likelihood for his successor, as well. The Kremlin also perceives the U.S. as an outright enemy. Therefore, the ideal scenario for the U.S. is for Putin to leave office.

Especially now that the level of demonization has reached its peak, with the attacks highly personal. We are not speaking of direct interference, of course, but of a deterioration in Russia's position through sanctions, as a long-term means of weakening the ruling elite.

Israel's Operation Solid Rock has taken hundreds of lives in a matter of days. Why does Israel arouse significantly less perturbation in the West than the Ukrainian conflict?

There are several immediate reasons. In the first place, everyone is accustomed to the regular exacerbation of the Israeli-Palestinian conflict. Second of all, Israel has enough allies within the U.S. that it can expect support for absolutely any action, thanks to the influential Israel lobby.

Thirdly, while Europe has much more sympathy for the Palestinians when compared to America, Europeans still harbor an enormous amount of guilt for the Holocaust. Thus it is frowned upon to criticize Israel, which is using military force to maintain its security.

First published in Russian at Lenta.ru.

Read more: Which Russian companies could benefit from sanctions?