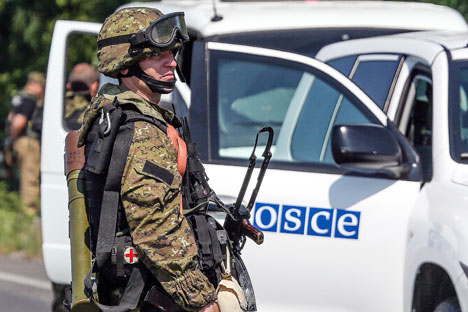 RBTH presents a selection of views from leading Russian media on the latest developments in Ukraine, including statements by Russia’s ambassador to the UN, a summary of EU sanctions and the outlook for Ukraine’s economy.

The newspaper Novaya Gazeta features the comments of Vitaly Churkin, Russia’s Permanent Representative to the United Nations, who is accusing Ukraine of wanting to destroy evidence from the Malaysian Airlines Flight 17 crash. “We fear that the Kiev authorities are motivated by the aim to destroy evidence that exposes their role in the Malaysian airliner catastrophe,” the newspaper reports, citing a statement Churkin made at a UN Security Council session on Wednesday.

Nezavisimaya Gazeta reports that the pro-autonomy militias in eastern Ukraine have accused the Ukrainian military of using ballistic missiles in the area. Militia members have said that they detected fragments of a partially unexploded ballistic missile warhead in the Lugansk Region. Andriy Lysenko, a spokesperson for the analytical National Security and Defense Council of Ukraine, has denied these accusations. “The Ukrainian Armed Forces do not use ballistic missiles. They have enough lower-grade weapons that are being used effectively to liberate Ukraine’s eastern regions,” Lysenko said.

Will Russia feel the pinch from the latest round of sanctions?

In an article headlined “Apocalypse Tomorrow,” the newspaper Vzglyad predicts that Ukraine’s economic crisis will only get worse. According to Vzglyad, Ukraine’s GDP is 4.7 percent lower now than at the same time last year, and the prognosis for the rest of the year looks bleak. The Russian government has already introduced a draft resolution introducing duties on Ukrainian goods and negotiations over gas prices continue.

The newspaper Kommersant reports that the latest round of European Union sanctions against Russia includes three companies and eight individuals. The companies are Russian National Commercial Bank, defense industry holding firm Almaz-Antey, and new discount airline Dobrolet. According to Kommersant, there are now 95 Russian and Ukrainian citizens who are banned from entering the EU and whose EU-based assets are subject to being frozen. In addition, the list contains 23 companies with which EU individuals and firms cannot work. Furthermore, European companies are now barred from investing in infrastructure, transport, telecommunications, the energy sector, oil production, gas production and mineral resource production in Crimea and the city of Sevastopol. European firms are also banned from providing loans or insurance services to companies involved in these lines of business in those areas.

Official approval of economic sanctions, including new barriers for Russian banks to enter EU capital markets, an embargo on sales of military equipment to Russia, and a ban on Russian imports of dual-purpose products and technology for the energy sector is expected July 31.

Newspaper Moskovsky Komsomolets cites Vladimir Shtol, a professor at the Russian Presidential Academy of the National Economy and Public Administration, as saying “the Third World War has already begun.” Shtol compares current events in Ukraine with the breakup of Yugoslavia and says that if NATO were to put troops on the ground in Ukraine and consider the country as a main external partner, this would be a watershed event that would unleash a full-scale international conflict.

In another article, however, the paper seems to downplay the risk of an escalated conflict. The second article notes that the U.S. is unlikely to provide Ukraine with weapons, citing a statement by U.S. President Barack Obama, who said that the Ukrainian Army is better equipped than the pro-autonomy militias and that the only question now is “how to stop the bloodshed in Ukraine.”