Will Russia feel the pinch from the latest round of sanctions? 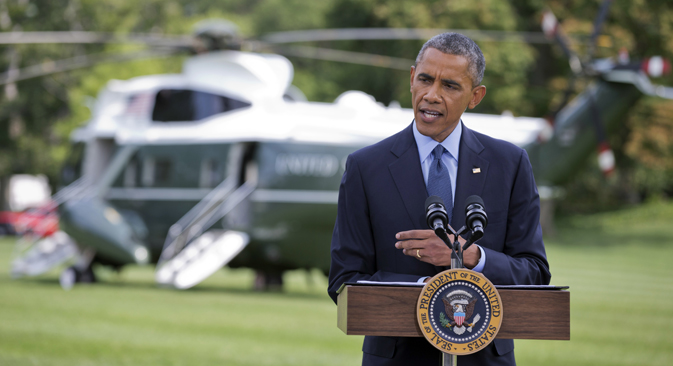 President Barack Obama speaks on the South Lawn of the White House in Washington, Tuesday, July 29, 2014, as he announces new economic sanctions against key sectors of the Russian economy. Source: AP

Three major Russian banks and parts of the country’s defense industry have been hit with U.S. sanctions; experts say the move will cause the financial sector to look internally for financing.

On July 29, the United States announced sanctions against Russia for the third time. Unlike the previous rounds of sanctions, which primarily targeted specific individuals, the new sanctions focused on sections of the Russian economy – particularly the financial and defense sectors.

Some media reported that sanctions were being prepared against Russia’s retail banking giant Sberbank, which is 50 percent owned by the Central Bank of the Russian Federation, but this information was later refuted.

Alexander Abramov said that Sberbank will likely be safe from sanctions for a long time because so many ordinary Russians have accounts there.

“Any restrictions and prohibitions on the institution will actually mean sanctions against 75 million people – the active bank customers,” Abramov said. “Sanctions would then hit the entire population, not just the financial structure. This is the main reason that the Americans and Europeans will refrain from the application of sanctions against Sberbank.”

Until sanctions are lifted, U.S. citizens and companies are prohibited from providing these banks and any related entities loans lasting longer than 90 days.

According to official statements from the U.S. Treasury, these sanctions are designed to limit the ability of banks to obtain financing. These sanctions alone are unlikely to have much effect on the liquidity of Russian banks, however.

They borrow very little directly from the U.S. market and most deals between Russian banks and U.S. investors are carried out through the Eurobond market. VTB, for example, has a total of $12.7 billion dollars in debt, but only 5.2 percent of these are Eurobond loans.

At RAB, this percentage is higher – 20-22 percent of a total debt of $8.6 billion dollars, but still not extremely significant. Following the sanctions, any refinancing of these debts via new loans will no longer possible in Western markets for the listed banks.

Alexander Abramov, lead researcher at the Center for Analysis of the Financial System at the Russian Presidential Academy of National Economy and Public Administration, said that the sanctions are unlikely to have much effect on the banks.

“State banks, during 2015-2017, will need to refinance a total of $15 billion. This is a significant amount, but it is not comparable to the scale of business of these banks. Moreover, this amount can be partially replaced by some internal borrowing or from other sources. These sanctions will not achieve a decisive effect in the financial sector – this is rather a precautionary step,” Abramov said.

Debt financing and funds could also be attracted via other currencies and in other countries – particularly in the Middle East and in Asia. Additionally, the Central Bank of Russia has already stated that it will support banks that fall under U.S. sanctions if necessary.

The banks themselves all issued statements following the announcement of the sanctions saying that the sanctions will not affect their work.

Abramov says that the sanctions are likely to be most painful for RAB. Unlike VTB, RAB’s business is not diversified and the bulk of its loans – to agricultural enterprises and small businesses – are high-risk. Even so, Abramov said, RAB has a lifeline in the Central Bank, which can provide the bank refinancing up to $2 billion a year.

The United Shipbuilding Corporation (USC) – the state holding company that carries out 80 percent of all shipbuilding projects in Russia, including for the military, was also named in the sanctions.

In a statement, the U.S. Treasury Department said that under the sanctions, all holdings (assets) of the organization in the U.S. (if any) are subject to confiscation, and U.S. individuals and entities are prohibited from carrying out transactions with it. In response, the USC press service said that the corporation has no assets in the United States.

According to Vadim Kozyulin, an expert on the arms trade at the analytical PIR Center, sanctions against the Russian defense sector will limit its future growth.

“The sanctions have negative consequences in the closing of opportunities that existed before – for the acquisition of technology and component materials. Domestic resources are insufficient for the Russian defense industry to successfully develop,” Kozyulin said.

In announcing the sanctions, U.S. President Barack Obama said that the new sanctions were prepared because Russia has not changed its policy towards Ukraine and continues to support the pro-autonomy militias fighting in the eastern part of that country.

According to Mikhail Remizov, a Russian political scientist and the president of the Institute of National Strategy, the sanctions reflect a presumption of guilt on the part of the U.S. as regards Russia; they are not linked to any specific action by Moscow.

“In this situation, retaliatory steps are needed,” Remizov said. “And the main retaliatory response can only be the increasing of domestic economic independence. Then the price of sanctions for the entire world will increase.”