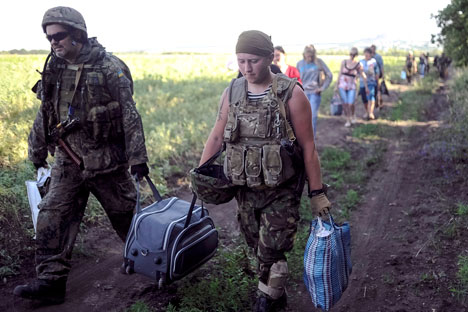 400 members of the Ukrainian military have crossed the border into Russia to seek asylum. Source: Reuters

RBTH presents a selection of views from leading Russian media on the latest developments concerning Ukraine, including reports on a group of Ukrainian soldiers that have crossed into Russia, a new initiative to encourage Russians to put up refugees in their homes, and a lack of hot water in Kiev.

The Kommersant newspaper reports to its readers that in the coming days Ukraine plans to introduce major sanctions against companies located within the country that are cooperating with Russia, similar to those that have already been leveled by the U.S. and the EU.

This set of sanctions essentially places a ban on raising financing for more than 90 days and forbids the supply of goods and equipment for military and dual-use items, as well as the supply of oil and gas equipment.

However, according to experts the newspaper cites, sanctions in this form will only have a political significance and they will have no additional impact on Russian companies doing business in Ukraine.

“A large-scale impact from these sanctions should not be expected, but Ukrainian businessmen will have to seek new markets and reconfigure their businesses so that they do not overlap with Russian ones,” the newspaper reported, quoting the Chairman of the Committee of Economists Andrei Novak.

Gazeta.ru has published an article entitled “Patriotism is not keeping Ukraine warm,” in which it reports that half of the residents of Kiev remain without hot water. The newspaper refers to the company Kyivenergo, which has explained that by cutting off hot water now, the capital's residents can be assured they will not be left without heat this winter.

However, Gazeta.ru forecasts are disappointing: “Given the problems with gas supplies, the situation with heating and lighting remains uncertain,” claims the newspaper. “The key issue is why there is no hot water – and that’s because it saves gas,” the newspaper said, quoting the mayor of Kiev, Vitali Klitschko.

Moskovsky Komsomolets has published an article reporting on preparations by Kiev of a list of Russian cultural figures that are now banned from entering Ukraine. The list, according to the newspaper, will contain 500 names of those who supported the annexation of Crimea by Russia.

Novaya Gazeta reports that Moscow is accusing NATO Secretary General Anders Fogh Rasmussen of using pressure tactics to sway the investigation into the cause of the crash of the Malaysian Boeing - 777 in the Donetsk Region. Referring to a tweet by Russia’s permanent NATO representative, the newspaper writes: “The NATO Secretary General has decided not to wait for the completion of the investigation into MH17 and is pressing for it to be expedited.”

The newspaper reminds its readers that Rasmussen had earlier said that the Alliance has data confirming the guilt of pro-autonomy militants in the downing of the Boeing. However, sources close to the investigation told Novaya Gazeta that preliminary decryption of conversations recorded on the black boxes “had not revealed anything unusual.”

The Vzglyad newspaper reports that 400 members of the Ukrainian military have crossed the border into Russia to seek asylum. The newspaper reports that, following a decision by the Border Service of the Russian Federation, regional border management officers opened a humanitarian corridor and allowed those seeking sanctuary to enter Russian territory.

The newspaper recalls that this is not the first time that Ukrainian soldiers have abandoned their military units and militias to ask permission to enter Russia to avoid taking up arms against their own people.

The Izvestia newspaper reports that a member of the lower house of the Russian parliament, Viktor Shudegov (of the A Just Russia Party) is preparing a draft law on state compensation of utility bills for Russian citizens who provide their living space for the temporary accommodation of refugees.

According to the legislator, the introduction of such guarantees will encourage citizens to host those forced to leave their homes and help the state to more expediently solve the problem of resettling a mass influx of refugees, which is currently occurring due to the ongoing war in Ukraine.