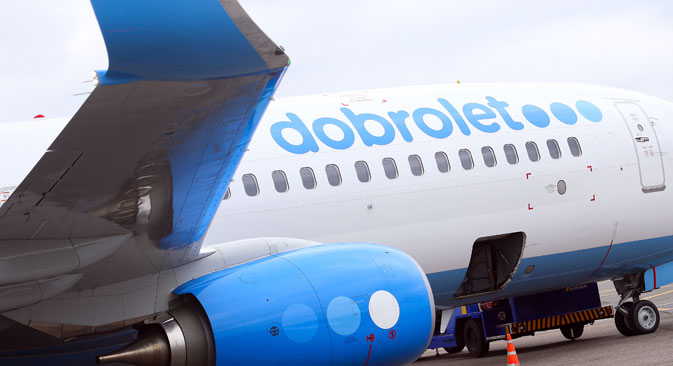 Russian’s lone economy airline Dobrolet, which was created by the national airline Aeroflot, has suspended flights due to the effects of EU sanctions. The decision was taken after leasing contracts were suspended and German partners refused to service Dobrolet aircraft.

Dobrolet, Russia’s only low-cost airline, has suspended its operations due to EU sanctions, according to a statement released by the national airline Aeroflot, Dobrolet’s creator, on August 3.

“Given the unprecedented pressure from European counterparts, the carrier was forced to suspend flights and ticket sales,” reads the official press release of the Aeroflot Company.

According to the airline, its European partners had canceled aircraft lease agreements, as well as agreements on maintenance and insurance. This happened after Dobrolet was placed on the EU sanctions list for having “facilitated the integration of Crimea to Russia.”

The issue was that the first routes that Dobrolet opened in June 2014 included flights to the capital of the peninsula, Simferopol. As a result, European companies were forbidden to cooperate with Dobrolet and all of its assets in the EU were to be frozen.

According to the Russian business newspaper Kommersant, the main problem was the refusal of the Irish SMBC Aviation Capital to execute a lease agreement for a Boeing 737-800NG. Dobrolet has already received two planes, and before the end of the year, the number was to have increased to eight. There were plans to buy another eight aircraft in 2015. In addition, the German company Lufthansa Technik refused to provide technical maintenance.

The Russian national carrier Aeroflot announced the creation of its own economy subsidiary in October 2013, but Dobrolet began flights only in June 2014. Tickets were sold to Crimea at special rates from 999 rubles (about $29) to 3,499 rubles (about $102), and included special subsidies from the state.

As RBTH learned earlier from Dobrolet’s press service, in August, the company planned to open two more domestic routes – from Moscow to Volgograd (600 miles southeast of Moscow) and from Moscow to Perm (900 miles east of Moscow). In the first days of August alone, about 65,000 passengers flew with the company. The total losses suffered by Aeroflot from the canceling of operations by Dobrolet are still unknown.

According to analysts at Sberbank, by March 2014, Aeroflot had spent $20 million on this project, out of a total investment program of $100 million. However, the planes are included in Aeroflot’s assets, and therefore the Russian national carrier may incorporate them into its own fleet.

Many other Russian airlines currently fly to Crimea, including Aeroflot itself, Transaero, S7, Ural Airlines and Red Wings. The Russian government, according to RBTH sources, fears that other airlines mayfall under sanctions.

In such a case, according to the business newspaper Vedomosti, Russian officials may restrict or even prohibit transit flights by European airlines travelling from Europe to Asia over Russia. However, government officials have denied any such intentions.

The launch of Dobrolet was the third attempt to create a Russian economy airline, with all previous attempts resulting in failure. Two companies working on such a model – Sky Express and Avianova, went bankrupt in 2011, although, their bankruptcies were due to exclusively economic reasons.

Nevertheless, after the suspension of operations by Dobrolet, according to Dmitry Bedenkov, head of the analytical department of IC RUSS-INVEST, the prospects for a competitive low-cost airline in Russia are ambiguous.

On the one hand, the air transport market in Russia is highly concentrated: About 70 percent of the market is owned by the three major airlines – Aeroflot, Transaero and S7. On the other hand, a third of passengers on international flights are serviced by foreign airlines.

“The share of charters in international traffic fell from 30 percent in 2007 to below 25 percent in 2013. This reflects a more flexible approach to price formation, which is used by the major airlines,” says Bedenkov. In other words, conventional airlines are simply lowering their prices.

However, Dmitry Baranov, a leading analyst at Finam Management, explained that the reason for suspension of the company’s operations are political, not economic.

“This means that this will have no impact on the activities of low-cost operators in Russia. Furthermore, Dobrolet may continue its work, although after a certain break,” said Baranov.