Press Digest: Will Russia limit EU flights via its airspace over sanctions? 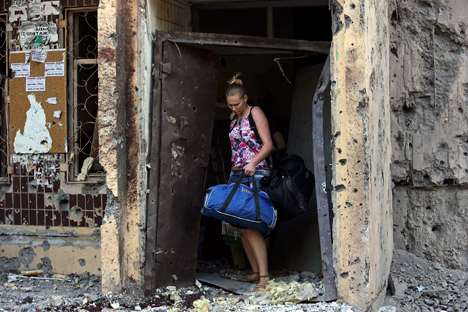 According to the United Nations agency for refugees, about 730,000 Ukrainians have left the country for Russia this year due to the fighting in eastern Ukraine. Source: Reuters

RBTH presents a selection of views from leading Russian media, featuring news of possible restrictions on the use of Russian airspace by European airlines in response to sanctions, U.S. concern over large exercises by Russia’s air force on the Ukrainian border, and discussion of whether the end of the conflict in Ukraine is due.

The Vedomosti newspaper, citing an unnamed source in the Russian government, reports that officials are considering the possibility of restricting or prohibiting the transit of European airline flights from Europe to Asia via Russia.

According to the newspaper, this could be a response to the previously imposed EU sanctions against Russia, which hit the country’s low-cost operator Dobrolet Airlines first, given that it was transporting passengers to Crimea.

According to a source, the decision to ban transit flights is still pending. Russian presidential press secretary, Dmitry Peskov, according to Vedomosti, said that all the pros and cons need to be weighed first, so as not to harm themselves.

The newspaper reminds its readers that airlines currently fly from Europe to Asia using the shortest route - across Siberia - which is more expedient and saves fuel.

The Kommersant newspaper has published an article entitled “Lager nevoennoplennyh (Non-P.O.W. Camp),” reminding its readers that more than 400 Ukrainian soldiers, after laying down their weapons and destroying their vehicles, crossed from the combat zone in the east into the territory of the Russian Federation.

According to a Kommersant source in Kiev, in the near future, the soldiers left behind from the other formations that have been blocked in by militias in the so-called “southern cauldron” southeast of Lugansk may follow the example of the 72nd motorized brigade.

Novaya Gazeta reports that the U.S. State Department is concerned about the military exercies by the Russian Air Force that began yesterday, August 4, on one of the Russian training grounds. The newspaper quoted Jen Psaki, U.S. State Department spokesman, as saying that the large-scale exercises that Russia has decided to carry out on the Ukrainian border from August 4 to 8, are “provocative and only serve to escalate tension.”

Gazeta.ru wonders in one of its articles how much longer the fighting in Ukraine will last. The publication notes that ring of forces loyal to Kiev surrounding Lugansk and Donetsk is effectively compressed, and the territory controlled by the self-proclaimed People's Republic of Donetsk and the Lugansk People's Republic continues to dwindle. The cities themselves are already on the verge of a humanitarian disaster.

However, experts, making an appeal to the publication, believe that it is too early to talk about the imminent end of hostilities. According to them, a “very optimistic scenario” would be “if the conflict is resolved at least in the spring” of next year.

Read more: The war in Ukraine: This is no time for proving your point>>>