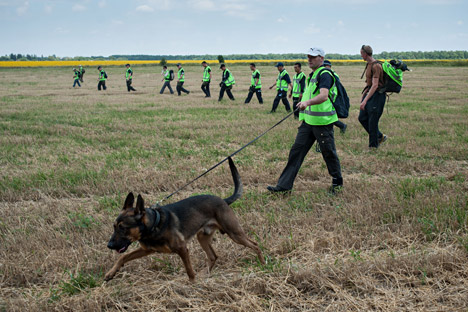 The Kommersant newspaper writes that the investigation at the crash site of the Malaysia Airlines airplane has once again been impeded by military action. Source: AP

RBTH presents a selection of views from leading Russian media, featuring analysis of Russia’s proposal to the UN of a humanitarian mission to Ukraine and ongoing reform in the Ukrainian government, as well as news that Ukrainian President Petro Poroshenko is ready to compromise on a gas deal with Russia.

The Vedomosti newspaper writes that Russia has offered to send humanitarian aid to the southeast of Ukraine under the auspices of the International Committee of the Red Cross, referring to comments made by Russia’s Permanent Representative to the United Nations, Vitaly Churkin.

The newspaper emphasizes that Churkin is concerned about the future fate of Ukrainian citizens. Vedomosti quoted him as saying that in the war zone in Ukraine there are about four million people, of which more than 200,000 have been left without drinking water.

The newspaper also reports that the United Nations, the International Organization for Migration and the Red Cross are ready to discuss Russia’s proposal for the deployment of a humanitarian mission in the southeast of Ukraine.

An article in the Moskovsky Komsomolets newspaper analyzes Ukraine’s refusal to accept humanitarian aid from Russia. The newspaper published a statement by Oleksandr Pavlichenko, Acting Permanent Representative of Ukraine to the UN, who said that no humanitarian crisis was present in Ukraine, and that the authorities were able to cope with the situation.

The newspaper expressed the view that the United Nations shares the Russian evaluation of the gravity of the situation in the eastern regions of Ukraine, but is in no hurry to approve the proposals being made by Russia. The newspaper quotes John Ging, Director of the Coordination and Response Division, United Nations Office for the Coordination of Humanitarian Affairs, who claims that the preparation for winter in Ukraine is currently the central component of the UN’s humanitarian plans.

At the same time, Moskovsky Komsomolets reports that ​the UN is not saying whether the organization is ready to consider Russia’s proposal for joint work in this direction.

Gunther Oettinger, European Commissioner for Energy, is going to discuss the holding of Ukrainian-Russian talks on natural gas supplies during his visit to Moscow in late August, according to Nezavisimaya Gazeta.

Ukrainian President Petro Poroshenko has admitted that there is a possibility of reaching a compromise on natural gas between the two countries, according to the publication.

Nezavisimaya Gazeta reminds its readers that the outcome of the gas conflict that unfolded between Russia and Ukraine this summer was the stopping of Russian gas supplies to Ukraine and switching Kiev to a pre-payment plan for gas deliveries.

Some of the experts interviewed by Nezavisimaya Gazeta indicate that a compromise in the gas sector is dependent on the general background of Ukrainian-Russian relations, which are deteriorating. Others, mentioning the reluctance of Gazprom to lose its Ukrainian market, suggest that an agreement on the resolution of the gas crisis is possible. Still others point out that the EU is only worried about gas supplies for European countries.

The Kommersant newspaper writes that the investigation at the crash site of the Malaysia Airlines airplane has once again been impeded by military action. On August 5, experts from Malaysia managed to work at the crash site in the Donetsk Region for less than two hours, after which they were forced to leave the area for security reasons.

Gazeta.ru writes about Pavel Petrenko, Ukrainian Minister of Justice, who has announced radical cuts to the state apparatus – saying that from 30 to 50 percent of officials are to be made redundant. According to the newspaper, Petrenko justifies this by the inefficiency of the state bureaucracy and the need for the implementation of an anti-corruption policy.

Oleh Soskin, Director of the Institute of Society Transformation, believes that the Ukrainian government is working on getting rid of the old, unreliable staff under the guise of administrative reform.

“We need to get rid of them. However, you cannot just dismiss them, therefore the authorities have declared that there will be restructuring. To do this, the money must also be reduced, so that those, whom they cannot remove, will themselves leave after their salaries are cut. Then Poroshenko’s people will bring in their own personnel and allocate them new funds from the budget,” he told Gazeta.ru.