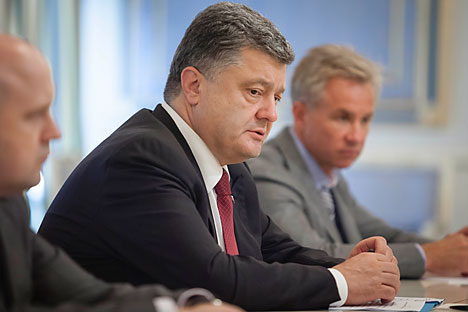 RBTH presents a selection of views from leading Russian media, featuring reports on Ukraine’s alleged use of banned weapons in operations in the Donbass and NATO Secretary General Anders Fogh Rasmussen’s visit to Kiev, a new ‘expert’ theory on how Flight MH17 was shot down, and further news on a possible ban on EU airlines flying over Siberia.

The Kommersant newspaper writes that the Investigative Committee of the Russian Federation has established the fact that Ukrainian forces have used phosphorus bombs during the military conflict in south-eastern Ukraine. Moreover, the newspaper states that the prohibited ammunition, according to the investigation, was used not on military but on civilian targets.

Kommersant notes that the investigation is currently trying to determine who precisely, within the Ukrainian forces, gave the orders to employ the prohibited weapons and who actually used them. The Investigative Committee plans on presenting the accusations to the guilty party in written form and selecting a preventive measure when it appeals for an Interpol search, says Kommersant.

According to Nezavisimaya Gazeta, NATO Secretary General Anders Fogh Rasmussen will fly to Kiev today to meet with the Ukrainian government. According to Kiev, Rasmussen's personal meeting with representatives of the Ukrainian government is related to the discussion of strategic collaboration that will be part of the agenda of the NATO summit in Great Britain, due to be held on September 4 and 5.

The newspaper's diplomatic experts say that the question of Ukraine's entry into NATO will not be considered. However, Nezavisimaya Gazeta notes that there are rumors in Kiev that the American military will help prepare Ukraine in case of open military aggression, represented by Russia's attempt to deploy peacekeeping forces to the Donbass.

The Moskovsky Komsomolets newspaper, citing the Malaysian newspaper The New Straits, has published a resonant announcement by ‘experts’ about the possible causes for the Malaysian Boeing's crash in the Donetsk Region, though it does not name the specialists in question or whether they have any connection to the investigation into the catastrophe. The ‘experts’ express the opinion that an SU-25 fighter fired an air-to-air missile at the civilian airliner and then "finished it off" with a 30-millimeter gun.

This announcement, says the newspaper, would refute the earlier theory about the plane being shot down with a BUK missile. Kiev, however, denies this theory: According to President Petro Poroshenko, Ukrainian planes were not flying over Donetsk on the day of the Boeing catastrophe.

The Vedomosti newspaper writes that the European Union may close its airspace to Russian airlines if Russia prohibits the transit of European airliners over Russian territory. The newspaper quotes the European Commission's official representative in Germany, Richard Kuehnel, who says that air corridors are established according to international agreements and if Russia closes them on its side, the EU will be able to appeal to an international court. Moreover, according to Vedomosti, Richard Kuehnel is considering the possibility of adopting equivalent responsive measures without litigation, what the newspaper refers to as the so-called "revenge" tool.

On the same subject, Novaya Gazeta states that Russia's Foreign Minister Sergei Lavrov has said that announcements reported in the mass media about how Russia's Transport Ministry and Foreign Ministry will limit or ban western airlines from flying across Siberia is pure hearsay. The newspaper quotes the minister as saying that he does not support the bans, which would affect ordinary civilians who having nothing to do with the people waging war in Ukraine.