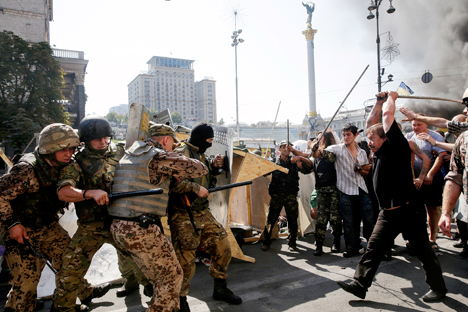 According to the newspaper Vzglyad, a new conflict has broken out between local authorities and protestors on the Maidan in Kiev. Source: Reuters

RBTH presents a selection of views from leading Russian media on the latest developments in Ukraine, including the end of the first phase of the MH-17 investigation, how Russia is coping with an influx of Ukrainian citizens and changes in the relationship between the authorities and protestors in Kiev.

According to Russian daily Kommersant, some parts of Russia, including Moscow and the Moscow Region, St. Petersburg, the Rostov Region, the Republic of Chechnya and Crimea, will no longer offer temporary asylum to Ukrainian citizens because the refugee quotas have been exhausted. According to the newspaper, the Federal Migration Service will transport the migrants to other regions at its own expense. The paper writes that more than 140,000 people have applied for temporary asylum and residency in the Russian Federation; 60,000 received temporary asylum. Approximately 500,000 people have entered Russia as a result of the conflict in eastern Ukraine. Refugees are currently accepted by most regions that border Ukraine, as well as regions in Central Russia and the Far East, including the Republic of Sakha (Yakutia), the Magadan Region and the Tyumen Region. Kommersant reporters expect that Ukrainian migrants will continue to arrive in Moscow, but they will no longer receive any funds from the city's budget.

Kommersant also reports that members of the international committee investigating the Malaysian Airlines Flight 17 tragedy left Ukraine yesterday after finishing "the first stage of inquiry." However, the newspaper cites a reliable source in the committee as saying, "the investigation, it seems, has reached a dead end: experts were not able to collect the pieces of the plane for examination, and without this procedure it will most likely be impossible to prove the earlier theory about the airliner being shot down with a missile."

The source told Kommersant that members of the international technical committee had sat in Kiev for almost a week while their departure for Donetsk had been delayed due to security threats. "In the end the experts got tired of participating in the daily unproductive meetings, and many of them wished to go home," said Kommersant's source. The newspaper reports that the committee's director has not yet indicated when and how the second stage of the inquiry will take place.

Novaya Gazeta reports that Western countries in the UN Security Council have blocked Russia's proposal for a truce on the territory surrounding the Malaysian Airlines Flight 17 crash site. The newspaper cites Russian Ambassador to the UN Vitaly Churkin as saying that several countries, including Lithuania, the U.S. and Australia proposed, unacceptable amendments to the text. According to these countries, the statement does not contain criticism of the actions of pro-autonomy militants. Churkin said: "The refusal of the truce that was approved by Security Council Resolution 2166 is a direct violation of this resolution and it will also have negative consequences for the work of the international inspectors, who will decide to return to the place in order to continue the investigation."

According to the newspaper Vzglyad, a new conflict has broken out between local authorities and protestors on the Maidan in Kiev. Many people have remained camped out in the square since the protests that forced former President Viktor Yanukovich from power in February, and the newspaper writes that on Aug. 7, the Kiev authorities tried to clear the protestors out. However, in response, those remaining on the square seized buildings next to the mayor's office.

Konstantin Zatulin, Director of the CIS Institute, believes that many demonstrators are convinced that they have not realized their goals and that what they had hoped for is now farther away than before. "In order not to feel bad when you must look those same people in the eyes, they just break up the crowd on Maidan," the expert told Vzglyad. "A permanent revolution is not needed in the center of a European government. They did what they had to for the current regime, and now they are no longer needed."