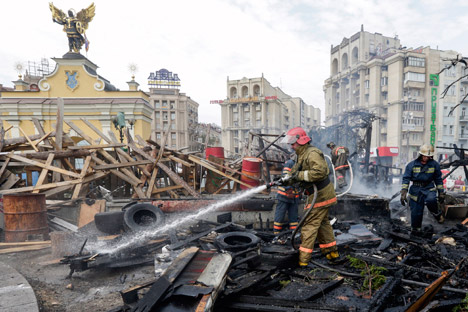 The Kommersant newspaper reports that the cleanup of Independence Square (Maidan) in Kiev has been completed. Source: Reuters

RBTH presents a selection of views from leading Russian media on the latest developments in Ukraine, including a potential disaster in waiting at a chemical plant in Gorlovka, a peace plan proposed by Belarusian President Alexander Lukashenko, and a possible agreement to supply Lugansk with humanitarian aid via the Red Cross.

Moskovsky Komsomolets reports that the Ukrainian army’s continued shelling of the Stirol plant in Gorlovka – one of the largest chemical plants in Ukraine – may lead to an environmental disaster. The newspaper quotes the company’s press secretary Pavel Brykov, who noted that the accident at Stirol could result in a leak at the Gorlovka state-owned chemical factory, where chlorobenzene [a flammable solvent – RBTH] is still stored. The minimum radius of the disaster area of such a leak, as reported in the newspaper, would be at least 300 kilometers [200 miles].

The Kommersant newspaper reports that the cleanup of Independence Square (Maidan) in Kiev has been completed, recalling the August 7 clashes between protesters and security forces. The situation was stabilized by Sunday. The paper cites the Mayor of Kiev Vitali Klitschko, who said that Maidan Self-Defense was willing to negotiate this time. The newspaper quotes one expert’s opinion about the motives for the crackdown on activists:  “Poroshenko is afraid of repeating the fate of his predecessor. Now he wants to remove this element of instability from the capital, so that the elections to the Verkhovna Rada will take place without protesters gathering on the Maidan.”

According to the newspaper, Lukashenko admitted that he not only believes his plan will be successful, but he has already voiced his ideas to some interested figures from the West, though his opinion was not taken into account. Lukashenko explained the dismissal of his plan by the fact that “no one wants peace in Ukraine.” The newspaper writes that “experts are wondering whether or not the head of the Belarusian state has leverage over the situation or if this is just a PR stunt.”

Vedomosti writes that during talks with U.S. Vice-President Joe Biden and German Chancellor Angela Merkel on August 9, Poroshenko said that Ukraine is ready to accept aid for Lugansk under the auspices of the International Committee of the Red Cross. However, it must remain under the control of the Ukrainian military through controlled border crossing points on the Ukrainian side, and it may not be accompanied by any foreign military support.

According to Novaya Gazeta, five Ukrainian officers detained earlier in the Rostov Region in Russia have returned home. The newspaper writes that they will not be prosecuted, as the commander of the 72th Brigade Ivan Voytenko and four of his fellow soldiers were following the orders of their superior officers and did not commit any direct crimes against individuals. Novaya Gazeta recalls that Ukrainian forces are suspected of using internationally banned weapons, as well as of having shelled Russian territory. Moreover, officers are suspected of involvement in crimes against civilians in the Lugansk and Donetsk regions.