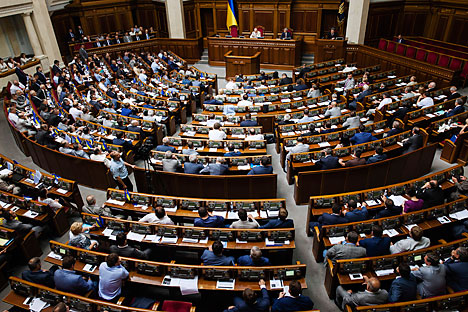 Verkhovna Rada adopted yesterday, in the first reading, a bill that would allow Kiev to impose sanctions against Russia. Source: Photoshot / Vostock-Photo

RBTH presents a selection of views from leading Russian media on the latest developments in Ukraine, including news of the first reading in Ukraine’s Verkhovna Rada of a bill that will allow Kiev to impose sanctions upon Russia, including a ban on gas transit, as well as a report on foreign mercenaries fighting for Ukraine in the Donbass.

The Kommersant newspaper writes that the parliamentarians in Ukraine’s Verkhovna Rada adopted yesterday, in the first reading, a bill that would allow Kiev to impose sanctions against Russia. The final reading of the document should take place on Thursday, August 14. However, the initiator of the bill, Prime Minister Arseniy Yatsenyuk, confirmed that a list of Russian individuals and entities subject to the new law has been already submitted to the National Security and Defense Council of Ukraine, which will impose these sanctions.

Kiev experts believe that the haste with which the bill is being adopted is evidence of the stratification of the Ukrainian authorities into a “party of peace” and a “party of war.”

The business newspaper Vzglyad also writes about possible Ukrainian sanctions against Russia. However, journalists from the publication believe that the threat of a ban on the transit of Russian gas to Europe is nothing more than a bluff by Kiev.

Most experts interviewed by journalists suggest that the fears of Brussels and Berlin will be taken into account by Kiev, and the paragraph on the prohibition of transit of natural gas will disappear from the second reading of the bill.

“It is no accident that the leaders of the Verkhovna Rada, which was going to pass the new law in a second and final reading on Tuesday, unexpectedly for the ordinary parliamentarians postponed its consideration to Thursday,” says Vzglyad.

Rossiyskaya Gazeta has published an article about foreign mercenaries participating in the fighting in eastern Ukraine. According to the publication’s sources, a few hundred fighters from private military companies are now fighting in the Donbass, as well as about a hundred volunteers ideological inspired by the Euromaidan movement.

Foreigners generally act as trainers, and work on training the National Guard personnel as well as Right Sector militants. In addition, the mercenaries guard Ukrainian officials and parliamentarians.

The newspaper also talks about specific people that are fighting on the side of the Kiev authorities, such as a citizen of Sweden named Mikael Skillt, an auto showroom manager from Italy, Francesco Falcone, and a citizen of France, Gaston Besson.

The newspaper Moskovsky Komsomolets reports that the Investigative Committee of Russia is to expand its list of accused in the criminal case “on the application of prohibited means and methods of warfare in the east of Ukraine”. There will be added new Ukrainian businessmen and politicians such as member of the Ukrainian parliament Oleh Lyashko, Donetsk Region Governor Serhiy Taruta, Arsen Avakov, the son of the head of the Interior Ministry of Ukraine, and others.