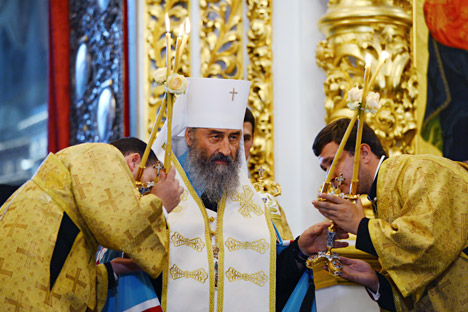 Metropolitan Onuphrius had stated that Ukraine should not enter the European Union "because people there have abandoned Christ." Source: Eugeniy Kotenko / RIA Novosti

RBTH presents a selection of views from leading Russian media on the latest developments in Ukraine, including the controversial humanitarian aid convoy sent by Moscow to Ukraine, the election of the new head of the Ukrainian Orthodox Church, and the fate of child orphans in the Donbass.

The Kommersant newspaper writes about the election of the new head of the Ukrainian Orthodox Church (UOC) under the Moscow Patriarchate. The candidate who garnered most votes was Metropolitan Onuphrius of Chernovtsy and Bukovina, an ecclesiast who is considered to be far removed from politics.

The elections took place in Kiev, as well as in Moscow. Director of the UOC's press office Vasily Anisimov said that, "the candidate suited most people, however he himself did not strive for power." Anisimov remarked that Metropolitan Onuphrius had stated that Ukraine should not enter the European Union "because people there have abandoned Christ," and called May 9 (Victory Day in the CIS countries) "the day celebrating the victory of good over evil" when Kiev had declared it a day of mourning.

The head of the synodal informational-educational department of the UOC, Archpriest Georgy Kovalenko, said that for the new primate "it is important to stop the bloodbath in the east and preserve the unity of Ukrainian Orthodoxy."

The Moskovsky Komsomolets newspaper sheds light on the Ukrainian reaction to the Russian humanitarian aid convoy heading for the Donbass. The arrival of the aid column has animated Ukraine, with some Ukrainian activists and bloggers arguing that the trucks should not be allowed inside the country, while others say the aid should be consumed according to Ukrainian judgment.

Euromaidan protesters from Kharkov and Right Sector militants formed a group and drove to the frontier point of Pletnevka in 30 cars. The activists are intent on blocking the humanitarian aid column, and are probably armed with the traditional clubs and Molotov cocktails.

Nezavisimaya Gazeta's Kiev correspondent writes on the front page that the Ukrainian government is demanding that Russia bring aid to the Donbass only through the International Committee of the Red Cross.

There were contradictory statements in Kiev about whether the residents of the Lugansk and Donetsk regions really need the aid. There were also arguments about whether Russia's initiative would be the first step towards creating order in eastern Ukraine and towards the normalization of Ukrainian-Russian relations, as well as speculation on whether today would mark the start of full-fledged military action between the two sides.

Rossiyskaya Gazeta writes about the fate of child orphans in the Donbass combat zone. Yesterday seven children suffering from cerebral palsy returned from Russia to Ukraine. The children had been removed by the pro-autonomy militants from the dangerous combat zone in the Lugansk Region and brought to the city of Donetsk in Russia's Rostov Region. The government in Kiev, however, considered the action to be a kidnapping.

"The Ukrainian authorities remembered about the sick orphans only when they appeared on Russian territory," writes the newspaper. "Seven boys, suffering from CP, entered the Donetsk central hospital in critical condition. But during the four days they spent in the health facility, their condition noticeably improved."

According to Presidential Children's Rights Ombudsman Pavel Astakhov, last week there were over 1,200 orphans in Ukraine's combat zone, yet the government in Kiev sabotaged their evacuation to Russia, as well as to other peaceful areas of Ukraine.