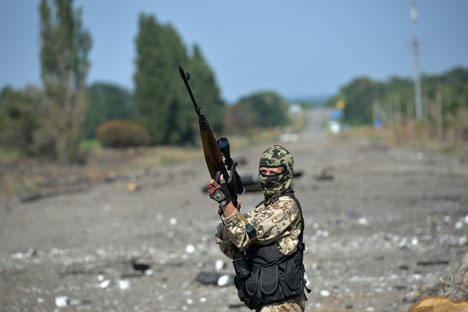 RBTH presents a selection of views from leading Russian media on the latest developments in Ukraine, including analysis of the four-way negotiations in Berlin on resolving the conflict in south-eastern Ukraine, as well as news of the critical situation in Donetsk, preparations to introduce universal conscription in Ukraine, and plans for a victory parade in Kiev.

The Expert magazine is pessimistic in its evaluation of the four-way talks between Russia, Ukraine, Germany and France, writing that “the sides gathered in Berlin for the discussion of completely different agendas”.

In the opinion of the publication, the principal aim of the Western countries remains the de-escalation of the conflict in south-eastern Ukraine with the preservation of the country’s pro-European orientation.

Russia, for its part, is ready to compromise and is striving to resolve the problem through the path of negotiation, understanding the futility of a military confrontation.

The magazine notes that the current military situation in the south east does not give Ukraine cause for optimism: the Ukrainian armed forces are not in a position to inflict a defeat upon the pro-autonomy militias, and the existence of the ‘people’s republics’will inevitably be prolonged.

“There is the second option of waiting until winter, when the Ukrainian authorities (if, of course, they do not achieve a breakthrough on the front) will no longer have either the means or the possibility of maintaining the operation and Kiev will be forced to agree to real talks,” summarizes Expert.

Alexei Makarkin, the deputy director of the Center of Political Technologies, commenting on the progress of the negotiations for the Svobodnaya Pressa (Free Press) website, is also skeptical in his assessment of the prospects for the four-way talks.

“As long as there sources for the realization of a diametrically opposed strategy remain, coming to an agreement will be very problematic,” writes Makarkin, meaning that Ukrainewill continue its attempts to solve the problem by means of force so long as it has the ability to do so.

Denis Denisov, director of the CIS Countries Institute, meanwhile, took a more optimistic view point, accentuating the very fact that talks were being held after a two-month hiatus as positive news.

“If consultations of this kind continue, the sides may shortly be able to reach a compromise and call off the operations that are currently under way in the Donbass,” said Denisov in an interview with Svobodnaya Pressa.

The newspaper Kommersant continues to follow the developing situation around the Russian humanitarian aid convoy on the Ukrainian border.

The column of vehicles is still unable to cross the frontier, despite the fact that at the end of last week conditions for its passage were agreed between Russia, Ukraine and the International Committee of the Red Cross (ICRC).

According to the ICRC, the current pause is related to the unresolved issue of the safety of the representatives of the international organization who are to accompany the cargo to Lugansk.

Local residents have reported that artillery battles are taking place justnine miles from the border, directly along the route that the convoy is to follow. In this light, the concern of the ICRC with respect to safety looks entirely logical, notes Kommersant.

In another article, Kommersant writes that on August 24 a parade is to take place in Kiev to mark Independence Day. The authorities have already designated the march as a ‘Victory Parade’.

According to the newspaper, units that have taken part in the operations in the east of the country will be involved in the parade. However, a number of Ukrainian politicians are of the opinion that holding a parade in the current situation is inappropriate.

The publication sees in the authorities’ plans an explanation for Kiev’s tough stance at the Berlin talks on reconciliation in Ukraine and predict that "military activities in the east willintensify" prior to the parade.

Gazeta.ru has published an article in which it explores four potential scenarios for the development of events in Ukraine, the most realistic of whichis the federalization of Ukraine with the preservation of Donetsk and Lugansk within its borders.

In this scenario, Donetsk oligarch Rinat Akhmetov will play a key role in establishing control over the region as an intermediary in resolving the conflict between Moscow and Kiev, and the Donbass will “strengthen its independence, but will remain part of Ukraine.”

Here Gazeta.ru writer Vladimir Dergachev notes that “in contemporary Ukrainian political discourse, ‘federalization’ is almost synonymous with ‘national betrayal’, and this means that Kiev must search for different terminology.”

Other scenarios for the future of south-eastern Ukraine look altogether more problematic for Russia.

The seen tail either the continued existence of  Donetsk and Lugansk as unrecognized republics, destabilizing the situation in the region, or the complete military defeat of the Donbass and suppression of resistance (meaning the complete loss of Russian influence over Ukraine), or the deployment of a Russian military contingent, which would be fraught with the extreme aggravation of already strained relations with Ukraine and the West.

Rossiyskaya Gazeta reports on the crisis in Donetsk, which has been left without water supplies and rail connections due to the battles. The city authorities have warned citizens that water supplies have been fully cut off for an indeterminate period.

The mayor’s office says that "assessing the scale of damage incurred by military operations and the length of time necessary to carry out repairs and reconstruction is currently impossible.

"Furthermore, Donetsk has been cut off from the railway network since Saturday by damage to tracks.The city is also experiencing serious power cuts, with 88 transformer substations out of action.

Rossiyskaya Gazeta also writes that the Ukrainian authorities are in ten ton bringing in universal military conscription in the country. The Ukrainian Ministry of Defense has informed the country’s mass media of its plans for full training for military service, which is scheduled to be implemented by the end of the year.

"It is planned that the ‘young fighter’s course’ will become mandatory for every citizen. For women, a program will be developed with an emphasis on civil defense and medical training. The first experimental groups will be recruited in large cities in the near future", reads the press release by the Ukrainian Ministry of Defense.