Humanitarian convoy is now a vital piece in the political game 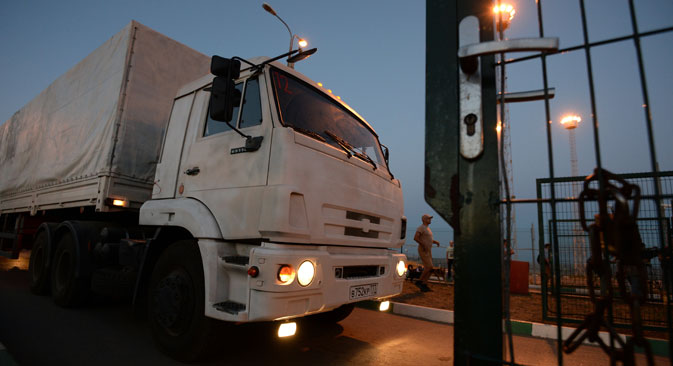 The successful delivery of Russian humanitarian aid to the Donbass would save civilians' lives but is not in Kiev’s political interests. Gevorg Mirzayan argues that the fate of the convoy now halted on the Russo-Ukrainian border could be pivotal in resolving the conflict.

Negotiations on the fate of the Russian humanitarian convoy of nearly 300 trucks, which has already been on the Russo-Ukrainian border for nearly a week, are drawing to a close. The sides have agreed on all issues related to customs clearances, and observers have not found any weaponry at all in the trucks.

According to Red Cross spokeswoman Viktoria Zotikova, the only thing that remains is to obtain security guarantees from both sides, and the relevant direct negotiations are currently taking place.

Zotikova declined to comment on the course of negotiations and emerging complexities. However, according to unofficial sources, the problem is on the Ukrainian side, or rather it is in the subdivisions of the National Guard made up of nationalist irregulars, who do not always obey the official authorities.

The Ukrainian military located in the cauldron south of Lugansk controls part of the road from the Izvarino border crossing to the capital of the self-proclaimed Lugansk People's Republic and is fully capable of attacking the convoy (militiamen warned several days ago that the Aydar National Guard battalion had been given the order to attack the convoy).

However, it is possible that this obstacle will be removed in the near future - either by negotiation or force. At the moment, militiamen are actively engaged in liquidating the cauldron and the only reason they have not yet been able to eradicate it is because one of the most combat-ready units in the Ukrainian army, the Lvov 80th airmobile brigade, is located in it alongside the Aydar battalion.

Meanwhile, some experts believe that the successful passage of such a large humanitarian convoy could hand Russia the trump card and, possibly, contribute to the end of the civil war.

Sergei Markedonov, a Russian political scientist and specialist on post-Soviet space, told an RBTH correspondent that “if the convoy reaches its destination, it will turn out that the ‘bloody Putin regime’ is taking more care of the Ukrainian citizens than Kiev. This is already creating discomfort for President Petro Poroshenko.”

From the political point of view, the convoy strengthens Russia's bargaining position. Moscow is now trying to persuade Poroshenko towards the beginning of a negotiation process and the federalization of Ukraine - steps which could not only end the war but give neutral status to Ukraine (in which anti-Russian sentiments in the west will be balanced by the pro-Russian forces in the east).

And Moscow's key argument is that there is a humanitarian catastrophe in the Donbass that the actions of the Ukrainian army (which failed in its execution of a blitzkrieg and has been drawn into positional battles using artillery) is only exacerbating. However, first Russia must prove to the world that it is a fact that there is a humanitarian catastrophe.

Finally, the successful passage of the humanitarian convoy will play in the favor of those forces within the European Union that advocate a compromise with Russia.

"The European countries are no less interested than Russia in resolving this conflict as soon as possible. However, trapped between Washington and Moscow, they are in an extremely difficult political position and, especially after the incident with the Malaysian Boeing, are in need of additional arguments," Timofei Bordachev, director of the Center for Comprehensive International and European Studies at the Higher School of Economics, told RBTH.