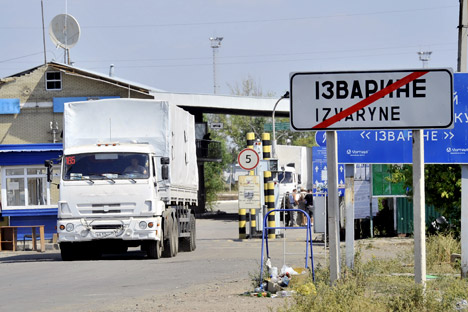 RBTH presents a selection of views from leading Russian media on the latest developments in Ukraine, including analysis of the future prospects for Ukraine’s economy, the resignation of another senior official in Kiev, and the possible fate of missing Russian photo journalist Andrei Stenin, as well as disagreement in Kiev over the upcoming Independence Day parade.

Expert magazine analyzes the possible development of Ukraine's economy after the country allegedly obtained $17 billion worth of credit from the International Monetary Fund. According to the publication, Ukraine's GDP will inevitably, and substantially, shrink this year. The main reasons for this are the loss of Crimea and the Donetsk and Lugansk regions' “refusal” to be a part of the country.

The magazine cites Director of the Analytical Department at Investment Capital of Ukraine Alexander Valichishen, who has calculated that even the temporary loss of the Donbass "will cost Ukraine 16 percent of its GDP and the loss of a quarter of its exports of goods and services." After such a fall in GDP and the obtainment of new credit the correlation between public debt and the GDP will be higher than 60 percent. In a few years this may even increase, which will result in default for Ukraine's economy. The chief danger, in Expert's view, lies in Ukraine's enormous debt with the IMF, which will deprive the country of independence in its economic policy.

Ukraine's difficult economic situation is also represented by the resignation of the Minister of Economic Development and Trade, Pavel Sheremet, who assumed the post after the change of government in February 2014. In a conversation with the Svobodnaya Pressa (Free Press) site, Ukrainian political analyst Mikhail Pogrebinsky explained that the minister was "an accidental figure in this post" and that his resignation had been inevitable.

Another expert, Deputy Director of the CIS Institute Igor Shishkin, believes that the minister "resigned because he did not want to be responsible for the developments in Ukraine." Shishkin also presumes that in the future Ukraine will experience a weakening of the economy, as well as a fall in living standards, however, this will not mean the end of the current government. "This regime will not be frightened by public protests," says Shishkin.

Rossiyskaya Gazeta speaks with Duma Speaker Sergei Naryshkin about the fate of Rossiya Segodnya photo correspondent Andrei Stenin, who disappeared in Ukraine at the beginning of August. "We believe that the government in Kiev should shed light on the fate of our reporter," Naryshkin announced, alluding to the possibility of Stenin having been detained by the Ukrainian security services, something that Kiev officially denies. Naryshkin compared the incident to the shocking story of the August kidnapping and beheading of American journalist James Foley by jihadist militants from the Isis group. "The reaction of many Western politicians to these obvious crimes is rather selective: Here I see, here I don't," remarked the Duma speaker.

Meanwhile, this Sunday, on August 24, Kiev will host a military parade, which government officials have described as "the honoring of our servicemen, who are now fighting for our independence in the East."

Gazeta.ru notes that all this contradicts statements made by Ukrainian President Petro Poroshenko, who announced that this year there would be no celebrations on Ukraine's Independence Day. Ukrainian politicians, meanwhile, are divided on the issue. Independent deputy Alexander Golub says: "A parade is always a demonstration of victory, but currently Ukraine has nothing to demonstrate," meaning that the "anti-terrorist operation" in the southeast is still not finished and the Ukrainian army is suffering most of the losses.

On the contrary, political commentator Pavel Nuss is convinced that the parade will have a "consolidating effect," which will help to "mobilize the armed forces, as well as the people." In turn, the President of Ukraine's Analytical Center Alexander Okhrimenko is unhappy about the substantial funds being spent on the parade when the anti-terrorist soldiers "do not have basic medicine and food." According to Okhrimenko, Kiev will spend a total of 200 million hryvnias ($15.2 million) on the August 24 parade, though he cited no source for this claim [estimates of the costs vary, with other media speculating that the figure could upward of 80 million hryvnias –RBTH].