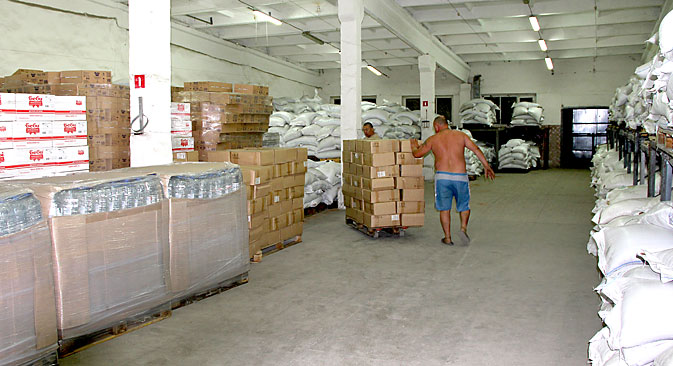 Unloading of Russian humanitarian aid to the south-east of Ukraine in Lugansk. Source: AFP / East News

The issuing of provisions of Russian humanitarian aid in Lugansk has begun after the controversial arrival of the aid convoy from Moscow. Russian Foreign Minister Sergei Lavrov says another convoy is planned and insists that on this occasion delivery terms will be fully negotiated.

Provisions of Russian humanitarian aid started in Lugansk on Monday, August 26, according to Igor Plotnitsky, prime minister of the self-proclaimed Lugansk People’s Republic.

“Everyone from Lugansk will be able to receive assistance at aid stations. The items have been packaged, and we have volunteers helping. Aid will be handed out to people in packages, and everyone will receive it,” Plotnitsky said.

According to him, there are a total of 26 aid stations provided by Russia operating in the city. The minimal package that each city resident is entitled to includes one kilogram (2.2 lbs) of rice, buckwheat, and sugar, three cans of corned beef, and 10 liters (2.2 gallons) of water.

No love lost for either side among citizens

Local resident Ivan Kondratyuk said in an interview with RBTH that senior citizens, children, and people with disabilities are receiving humanitarian aid first.

“Lugansk is being bombed, and I’ve been forced to flee to a nearby region while the fighting is taking place. I know from personal experience that not everyone has been able to obtain the aid packages,” he said, adding that every resident of Lugansk is in need of the help.

“We don’t have any money or any support from the government. The militia chooses who is going to get aid. I’m all for prioritizing senior citizens, children, and people with disabilities, but other residents of Lugansk need help as well,” Kondratyuk said.

According to him, the militias, which many see solely in a positive light, are proving not to be always so virtuous. The war has taken its toll on the resistance fighters as well.

“I want to add that I don’t support either side of the conflict, since the residents of eastern Ukraine are aware of both the untrustworthiness of the militia forces and of Kiev’s cruel orders,” Kondratyuk told RBTH. “Both sides are acting against the best interest of civilians. Before I left Lugansk, the militia opened fire on my block. All of this is a provocation.”

“It’s mostly adults waiting in line; I didn’t see any children,” said Safonov. “A few days before the column arrived, unidentified people shot up the city’s central market with mortars not far from one of the aid stations. But now things have calmed down, and people are standing in lines to get food peacefully.”

On August 23, a column of Russian Kamaz trucks loaded with humanitarian aid packages for the residents of south-eastern Ukraine crossed the Russian-Ukrainian border, unaccompanied by International Committee of the Red Cross (ICRC) personnel and without obtaining prior consent from Ukraine.

The ICRC said in a post on its Twitter account that the “manner in which the aid convoy from Russia arrived in Lugansk” had “complicated” the humanitarian operation.

The manner in which #AidConvoy from #Russia arrived in #Lugansk today has complicated this aid operation. #Ukraine

Kiev has described the incident as a “direct invasion” of Ukrainian territory, though Ukrainian authorities have stated that they will not use force against the vehicles carrying the aid packages.

According to the Ukrainian Foreign Ministry, the country has ensured "all of the necessary requirements for the safe passage of the convoy in order to avoid provocations." The ministry urged Ukraine’s international partners "to join in strongly condemning the illegal and aggressive acts of the Russian Federation."

Humanitarian convoy is now a vital piece in the political game

According to the Ukrainian Foreign Ministry, Russia "has violated the key principles of international law, in particular the inviolability of borders and non-interference in the internal affairs of another state and the conscientious fulfillment of international obligations."

Russian Foreign Minister Sergei Lavrov has said that Russia plans to send a second convoy to the southeast of Ukraine. He also stressed Moscow's willingness to negotiate the delivery of the goods this week.

"We want to negotiate all terms of delivery of the second convoy along the same route, in accordance with the same parameters, with the participation of Ukrainian border guards and customs officers in the near future," Lavrov said at a press conference in Moscow on Monday.

The names of Lugansk residents have been changed at their request.

The United Nations has prepared a preliminary plan to provide humanitarian assistance to Ukraine. The organization is requesting $33.3 million from donors.

"As of today, we have a preliminary plan for providing humanitarian assistance to Ukraine, for which we are asking for a total of $33.3 million from donors. The plan provides humanitarian support in a number of areas; for example, in water and sanitation, housing, health, and education," UN humanitarian chief Valerie Amos said.

She also noted that the plan will have to be revised and expanded if the situation in the region continues to deteriorate.