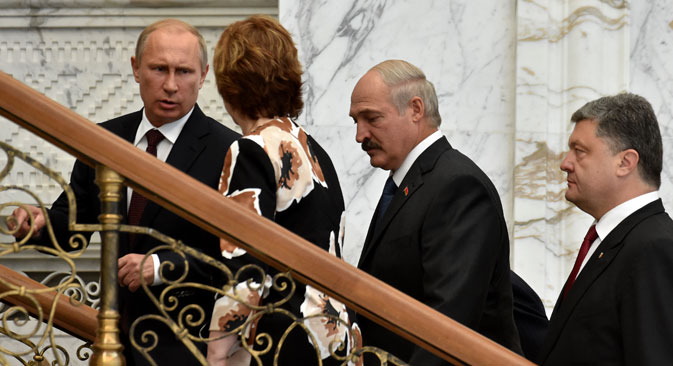 The summit in Minsk was held on August 26. Source: AFP / East News

RBTH presents a selection of views from leading Russian media on the latest developments in Ukraine, featuring analysis of the capture of Russian soldiers by the Ukrainian army on Ukrainian soil, as well as reports on the bilateral meeting between Russian President Vladimir Putin and his Ukrainian counterpart Petro Poroshenko in Minsk on August 26.

A bilateral meeting between the presidents of Russia and Ukraine took place as scheduled on August 26 during the Customs Union summit in Minsk, despite the fact that the conduct of both sides on the eve of the summit had left many in doubt as to whether the meeting would go ahead. Rossiyskaya Gazeta presents Vladimir Putin’s answers to questions from journalists after talks with his Ukrainian counterpart Petro Poroshenko.

Putin emphatically distanced himself from the issue of a ceasefire in the southeast of Ukraine, stating: "Russia has no right to discuss the conditions of a ceasefire and arrangements between Kiev, Donetsk, and Lugansk. This isn’t our affair. It is the internal affair of Ukraine.”

PHOTO OF THE DAY: Putin, Poroshenko meet in Minsk

According to the Russian president, Moscow, not being a party to the conflict in the southeast, can only “help to create a climate of confidence,” and does not have a direct influence on the fate of the opposition. At the same time, Putin stressed that Russia is ready to continue to provide humanitarian assistance to Donetsk and Lugansk and said that “the agreement [with Poroshenko – RBTH] has already been made.”

Regarding the issue of Russian gas supplies to Ukraine, according to Putin, talks have reached a “dead end” because of disagreements about the price, which “creates a dangerous situation in which we [Russia] are being threatened and which involves the transit of Russian gas to European consumers.”

In general, judging by Putin’s responses, it is clear that the Minsk meeting did not bring an immediate solution to the crisis. However, the Russian president is optimistic.

Expert magazine, considering another aspect of the Minsk summit, indicates that representatives of the European Union took a conciliatory stance at the meeting. According to the magazine, this sentiment arose due to economic reasons: “Everyone understands that the ongoing trade war between the EU and Russia is not profitable for either side.”

In addition, with winter approaching, the question of ensuring Russian gas supplies is growing more and more important for Europe, and the Ukrainian crisis could seriously worsen the issue. In this regard, European leaders are trying to stabilize Russo-European relations.

Expert believes that EU-American cooperation is currently going through a rather critical period, as Washington seeks to put direct pressure on Brussels and use it as a tool in the fight against Russia, despite the fact that such a confrontation is unprofitable for Europe as a whole.

The authors of the publication believe that the best solution is a Russian-European partnership and joint control over the post-Soviet region. “Moscow is quite satisfied with the transformation of the [former Soviet] countries in the buffer states whose leadership is looking towards Europe, but also takes into account and respects Russia's interests,” writes Expert.

Another bit of important news from the past few days was the detention in Ukraine of ten Russian soldiers, which was first reported on 24 August.

A Kommersant source from the Russian General Staff reported that the soldiers really had indeed crossed the Ukrainian border, but they did this “unintentionally” while patrolling border areas: The soldiers lost their orientation and were facing the wrong direction when they entered the territory of the neighboring state, where they were detained. They did not resist and laid down their arms at once.

According to relatives of the detained soldiers, their division was relocated to the Rostov region as part of military exercises. However, these did not include tasks to be conducted in Ukrainian territory.

At the same time, officials from Kiev are certain the detained soldiers were carrying out an act of military aggression. A representative of the Ukrainian security services said that “if elite troops are not capable of dealing with topography and cannot navigate the terrain, one wonders about the other armies and generals who gave the direct command to invade.”

Analyzing the events, Vzglyad newspaper provides a number of arguments, either confirming or refuting the Ukrainian version of the events. One argument for Kiev is the basic fact that Russian troops were present on Ukrainian soil and their recognition of the fact that they were performing a combat mission.

At the same time, according to Vzglyad, this recognition could have been extracted under torture, but the presence of Russians alone does not equate to an invasion. The publication recalls that when Ukrainian border guards and soldiers found themselves in Russian territory, no one ever accused them of aggression.