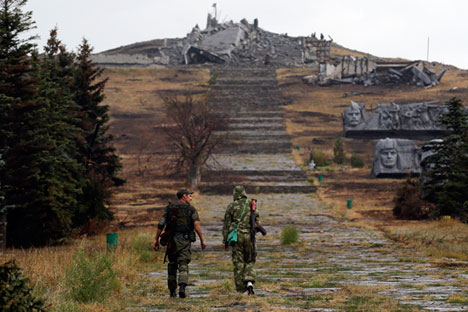 Russian President Vladimir Putin reacted to the military success of the militants, who are heading towards the coastal city of Mariupol, by asking their leaders to "open a humanitarian corridor for the surrounded Ukrainian servicemen, in order to avoid pointless deaths." Source: Reuters

RBTH presents a selection of views from leading Russian media on the latest developments in Ukraine, featuring analysis of Ukrainian President Petro Poroshenko’s claim on August 28 that Russian troops had launched an invasion of Ukraine, and the new offensive by pro-autonomy forces in the south of the Donetsk Region.

On August 29, Ukrainian President Petro Poroshenko said that "Russian forces had entered" his country, yet martial law has not been introduced. One Ukrainian expert interviewed by the Kommersant newspaper believes that Poroshenko's announcement is a way of avoiding accusations for defeats in the southeast and weakening the pressure from his opponents, including Yulia Tymoshenko, who has called for the imposition of martial law in the Donetsk and Lugansk regions.

Kiev-based political analyst Dmitry Dzhangirov has characterized the situation as a competition in patriotic rhetoric between politicians on the eve of parliamentary elections for the Verkhovna Rada, Ukraine’s parliament. Kommersant also writes that making announcements about a Russian invasion is a convenient move for Poroshenko, since it absolves the government of the failure of the "anti-terrorist operations" in the east, where the militants from the unrecognized republics are now on the offensive.

Meanwhile, Prime Minister of the Donetsk People's Republic Alexander Zakharchenko has described the militant counterattack as a "humanitarian-military operation," designed to "move the enemy away from the big cities" and thus protect the civilian population.

Analyzing the Ukrainian government's announcements about a Russian invasion of Ukraine, the Vzglyad newspaper also finds them convenient for Kiev: "Ukrainian nationalists can always refer to an insurmountable situation in the form of a Russian army." The newspaper concludes that Russian forces are not present in Ukraine, basing its opinion on the fact that if Russia were to send in a large armed contingent, the evolution of military operations would be completely different: Large columns of armored vehicles and support units would be impossible to hide from people's view.

The publication also cites Deputy Chairman of the Duma Committee on Defense Franz Klintsevich as saying that if Russia had invaded Ukraine, "We [the Russian forces] would already be standing near Kiev. This is not bravado, this is the reality." According to Klintsevich, if Russia were involved in the operations in the Donbass, Russian forces would easily be identified by their modern technology and "the powerful impact of their aviation and artillery."

Meanwhile, Russian President Vladimir Putin reacted to the military success of the militants, who are heading towards the coastal city of Mariupol, by asking their leaders to "open a humanitarian corridor for the surrounded Ukrainian servicemen, in order to avoid pointless deaths." In the same statement, Putin noted that the "militias have obtained considerable success" in suppressing Kiev's military operations.

According to Gazeta.ru, Putin's words prove that Russia's official position on the confrontation between Ukraine and the unrecognized republics of the Donbass remains the same: Russia is not a party to the conflict; it supports a peaceful settlement and it is ready to carry out large humanitarian relief missions. It should also be noted that neither Putin nor any other Kremlin representative reacted to Poroshenko's announcement about the Russian invasion. According to the experts interviewed by Gazeta.ru, "Kiev did not present any realistic evidence, therefore there is nothing to respond to."

Political analyst Alexei Makarkin believes that the escalation in Russian-Ukrainian relations began after the August 26 summit in Minsk, which did not yield any serious results and which led the sides to seek new arguments, including those of the Ukrainian military's advance and the counteroffensive by pro-autonomy forces. "Usually, negotiations and forceful pressure should be used in equal amounts. But in reality, in order to attain success in negotiations, it is forceful pressure that is often resorted to," Makarkin concludes.