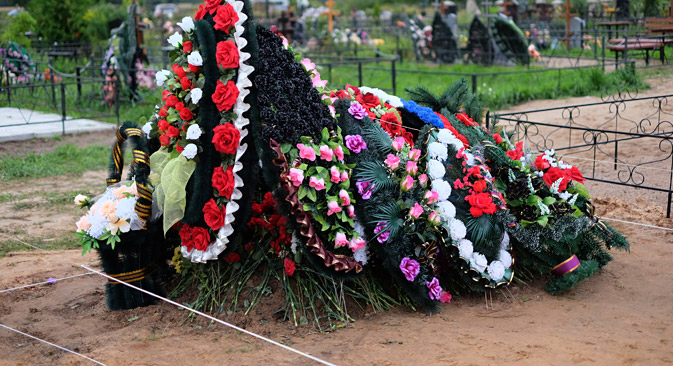 Correspondents found two fresh graves in a cemetery on the outskirts of Pskov containing the bodies of servicemen from the Pskov Airborne Forces. Source: Reuters

Russia's Defense Ministry has denied the involvement of paratroopers from Pskov in the war in Ukraine after a secret funeral for servicemen took place in the north-western Russian city on August 25. Meanwhile, the Kremlin has said that the circumstances surrounding the men's deaths need to be ‘verified’ and it is still too early to make any conclusions.

On Monday, August 25, a secret funeral was held in the town of Pskov (454 miles west of Moscow) for several Russian paratroopers who had died in unknown circumstances.

According to a witness interviewed by the Russian publication Slon.ru, about a hundred people attended the funeral, yet the circumstances behind the servicemen's deaths were not made public. The ceremony was cordoned off by the police and only the relatives of the deceased were allowed to participate.

Rumors have been circulating on the internet for the last few days that the paratroopers had been killedin action in eastern Ukraine, with this version of events being upheld by Russian human rights defenders and Ukrainian mass media, though Russia officially denies the presence of its armed forces on Ukrainian territory.

In a statement, Russia's Defense Ministry did not directly deny the rumors, but made it clear that it considered them merely the latest example of spurious evidence supposedly ‘proving’ Russian participation in the conflict.

"In the total number of 'revelations' of Russia's presence on Ukrainian territory this is the 1001st 'testimony’, ”Defense Ministry Representative Igor Konashenkov told journalists.

“It is quite likely that the next undeniable fact will be the capture, during battle, of a Kalashnikov rifle or an F-1 grenade with detailed diaries written by Russian soldiers," he said.

Meanwhile, the Kremlin has said that it is necessary to carry out a reliable ‘verification’ of the information before making any conclusions.

"This information is now being verified by the competent organs," the agency ITAR-TASS cited Peskov as saying. The president's press secretary added, however, that he is not aware if information about secret funerals can be verified.

Paratrooper comes ‘back from the dead’

Slon.ru correspondents found two fresh graves in a cemetery on the outskirts of Pskov containing the bodies of servicemen from the Pskov Airborne Forces named Leonid Kichatkin and Alexander Osipov.

Information about Leonid Kichatkin's death first appeared on the internet on August 24, when his wife Oxana posted a note announcing his death and the date ofhis funeral on his personal page. However, the page was later removed and a post appeared on his wife’s profile proclaiming that her husband was alive and well.

During a subsequent telephone conversation with journalists the paratrooper's family said that Kichatkin was alive, and a man on the phone even told the correspondent that he was Leonid Kichatkin.

Meanwhile, Russian journalists and bloggers alerted everyone's attention to the sudden cease in activity on the Pskov paratroopers' personal pages. Blogger Viktor Kadochnikov noted that the last entries in the accounts, which had regularly been updated before, were on August 15 and 16.

Poroshenko announces the presence of Russian troops in Ukraine

"One person logged in on August 17. That's it! After August 17 no one from the list below appeared on the site. (…) It seems that there was some kind of clash on August 15-16, and most of them are no longer alive," Kadochnikov wrote on his LiveJournal blog.

The rumors that the Russian servicemen died in Ukraine are continuing to circulate on Russian social networks. On August 25, one of the founders of the publication Look At Me, Alexei Amyotov, wrote on his Twitter page that he had met a man on the street who was going to the funeral of his son - a paratrooper, who had died in Donetsk.

Earlier the Dagestani publication Chernovik had written about the deaths of at least ten citizens of the Republic of Dagestan (in the north Caucasus)in Ukraine. According to the publication, the dispatch of contractors to Russia's borders has a "voluntary-compulsory" character. "Those who refuse to go, for example, can be taken out onto the square and accused of cowardice in front of the entire regiment, and so on," says a paratrooper, who spoke on condition of anonymity. "Moral pressure is used on them."

Meanwhile, Valentina Melnikova, the head of Russia's Soldiers' Mothers Committee, told RBTH that Russian soldiers are being forced to go to Ukraine's southeast. Furthermore, among them are not only contractors, but also servicemen doing regular military service.

"We received information from a Ryazan division saying that the soldiers were forced into signing contracts and going to the southeast," says Melnikova.

"As soon as we received the personal complaint, we inquired in the military prosecutor's office so that they could verify the situation: Who was it that was rising above their authority and forcing the soldiers to sign these contracts?"

Melnikova says that one of the conscripted soldiers sent a text message to his parents with the following text: "Colonel Medinsky assembled us and said: 'Sign the contract, we'll send you to Lugansk. If you don't sign it, I'll sign it for you.' And under pressure we signed it."

According to Melnikova, if you appeal to the military prosecutor's office, such ‘contracts’ can be declared juridically invalid and annulled.

Russia's Defense Ministry declined to comment to RBTH on both the funeral of the Pskov paratroopers and the appeal by the Soldier's Mothers Committee to the military prosecutor regarding the servicemen from Ryazan.