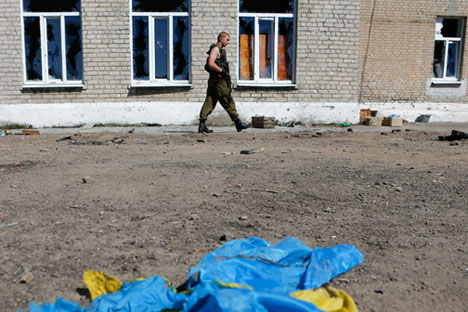 Ukraine returned the 10 Russian paratroopers detained on its territory, while Russia repatriated 63 Ukrainian servicemen who had crossed the border into Russia. Source: Reuters

RBTH presents a selection of views from leading Russian media on the latest developments in Ukraine, including analysis of Russian President Vladimir Putin’s latest statements on the Ukrainian crisis, Yulia Tymoshenko’s return to the political scene, new appointments in the EU elite, and Ukraine’s recently proclaimed ambitions of joining NATO.

Russian President Vladimir Putin has called on the Ukrainian authorities to achieve a peaceful resolution to the conflict in the country's southeast, adding that it is necessary to recognize the "statehood" of the region. This wording allowed for quite a broad range of interpretations, and some media outlets rushed to report that Moscow will be seeking the recognition of independence for the self-proclaimed republics.

Gazeta.ru quotes presidential press secretary Dmitry Peskov as explaining that Putin meant that Kiev should recognize the militants of eastern Ukraine as a party in the conflict and start negotiating with them.

"Only Ukraine can agree with Novorossiya [a term used in the 18th and 19th centuries in the Russian Empire for lands settled by Russians in present-day Ukraine], can take the interests of Novorossiya into consideration and it is only thus that a political settlement can be found," Peskov said, once again stressing that Russia was not a party to the Ukrainian conflict.

Putin has recently begun using the term ‘Novorossiya’ in official statements and, Gazeta.ru suggests, "it cannot be ruled out that in future Ukraine, Moscow sees Novorossiya not as the Lugansk and Donetsk regions but as a separate region with a special administrative status.” However, the article adds, Kiev does not view the two regions as a full-fledged participant in the political process.

The Kommersant daily reports that Moscow and Kiev have exchanged some reconciliatory gestures. Ukraine returned the 10 Russian paratroopers detained on its territory, while Russia repatriated 63 Ukrainian servicemen who had crossed the border into Russia. At the same time, the militiamen, who in recent days have made considerable advances against the Ukrainian government troops, have stopped their offensive. The leader of the self-proclaimed Donetsk People's Republic, Alexander Zakharchenko, has announced that they do not plan to storm Mariupol, the second-biggest city in the Donbass region of eastern Ukraine, over the next several days.

In the meantime, a draft law has been submitted to the Ukrainian parliament cancelling the country's non-bloc status, which would allow it to join NATO. Russian experts polled by Kommersant view this step as a consequence of the policy being pursued by the Kiev authorities. The head of the Foreign and Defense Policy Council, Fyodor Lukyanov, told the paper: "The new authorities have from the very start positioned themselves as supporters of integration with the EU and NATO."

At the same time, Kommersant continues, Ukraine has problems that would prevent it from joining the alliance: the Ukrainian army is not up to NATO standards; the country is in a difficult economic situation, and there is an armed conflict on its territory. Therefore, NATO is likely to limit itself to providing Ukraine with material and, possibly, military-technical support. Another important track in Ukraine's policy for strengthening relations with the West is to secure the status of a "U.S. ally outside NATO".

One of the most prominent supporters of Ukraine's accession to NATO is former Ukrainian Prime Minister Yulia Tymoshenko, who urged this step in a statement last week that marked Tymoshenko's return to the political scene after a prolonged period of silence. The Rossiyskaya Gazeta newspaper predicts that ahead of the parliamentary election, Tymoshenko may become "the most belligerent Ukrainian politician": She is calling for the introduction of martial law and for appealing "to the governments and peoples of the whole world to give some real military assistance to Ukraine".

At the same time, Rossiyskaya Gazeta points out, Tymoshenko's Fatherland party has suffered a considerable setback recently, when several influential figures, including Prime Minister Arseny Yatsenyuk, left it. The paper's sources suggest that the rift was caused by Yatsenyuk's attempt to push Tymoshenko into a back seat in order to head the party's list of candidates for the election. Tymoshenko rejected that scenario and intends to lead the list of Fatherland candidates herself. In the opinion of Rossiyskaya Gazeta, this state of affairs is unlikely to improve the prospects of Tymoshenko's party in the upcoming election.

Analyzing the recent reshuffle in the European Union leadership, the Nezavisimaya Gazeta daily says that "Kiev is pinning a lot of hope on the new European Council president, Polish Prime Minister Donald Tusk,” viewing him as a "notionally pro-Ukrainian" politician. At the same time, Nezavisimaya Gazeta points out, Italian Foreign Minister Federica Mogherini, who is to replace Catherine Ashton as the EU High Representative for foreign affairs and security policy, "earlier did not particularly favor Kiev" and is considered to be "notionally pro-Russian.”

The EU has thus preserved a balance of opinions and a reserved position as far as the conflict in south-eastern Ukraine is concerned. "Ukraine cannot count on outside help and must itself fight for its territorial integrity," Nezavisimaya Gazeta concludes.