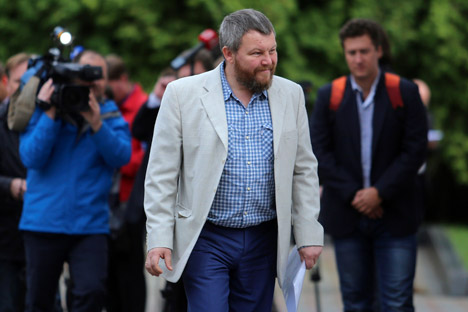 Pro-Russian rebel leader from eastern Ukraine Andrei Purgin arrives for the talks in Minsk, Belarus, Monday Sept. 1, 2014. A so-called contact group is meeting for talks in Minsk, the Belarusian capital, to reach an agreement on a cease-fire. Source: AP

RBTH presents a selection of views from leading Russian media on the latest developments in Ukraine, featuring analysis of talks held on Sept. 1 in Minsk by a contact group tasked with negotiating a resolution to the Ukrainian crisis, as well as a report on the use of Ukrainian prisoners to repair war damage in the unrecognized People’s Republic of Donetsk.

A new meeting of the contact group convoked to negotiate a resolution to the crisis in Ukraine was held on September 1 in Minsk, Belarus. Delegates from Russia, Ukraine, and the breakaway Donetsk and Lugansk people’s republics took part in the discussions. Rossiyskaya Gazeta reports that the key topic of the talks was an all-for-all prisoner swap between the unrecognized republics and Ukraine. The delegates also discussed the conditions required for a ceasefire.

Rossiyskaya Gazeta points out that for the first time, the delegates from Donetsk and Lugansk “expressed a willingness to guarantee Ukraine’s political, economic, and cultural unity” on the condition that Kiev fulfill several conditions. These include recognizing the republics’ special territorial status, assigning special status to the Russian language in those territories, granting amnesty for the militia fighters, and giving the authorities of the republics the right to independently appoint general prosecutors and judges.

“We exchanged documents. The Ukrainian side presented its vision, and we presented ours,” the newspaper cites Deputy Prime Minister of the Donetsk People’s Republic Andrei Purgin, who represented the breakaway republic at the negotiations, as saying.

The newspaper Kommersant quotes Dmitry Trenin, director of the Carnegie Moscow Center, in an article on the Minsk negotiations. According to Trenin, the militants’ plan does not essentially differ from the position that the Russian authorities have held since spring.

“It is of fundamental importance to Moscow that the eastern territories possess a status that would allow them to veto Kiev’s foreign policy decisions,” Trenin said. “This primarily has to do with Ukraine joining NATO or acquiring status as a major non-NATO ally to the United States, which would allow American troops to be located on the country’s territory. The second key point for Moscow is to preserve economic ties with eastern Ukraine, and the third point is to protect the Russian language,” he said.

According to Kommersant, a Russian diplomatic source has previously said that any attempt to change Ukraine’s non-allied status would be a death sentence on resolving the crisis.

Meanwhile, Gazeta.ru writes that the information coming out of the Minsk negotiations is conflicting. In contradiction to press reports that the leadership of the Donetsk and Lugansk people’s republics has agreed to let the region remain part of Ukraine, in an interview with Gazeta.ru Andrei Purgin said that the leaders of the breakaway republics would not agree to this. “There will not be autonomy, a federation, or a confederation within Ukraine. We want to become part of the Russian world. We don’t feel like we’re a part of Ukraine after thousands of peaceful civilians have been killed and infrastructure destroyed,” he said.

Regarding the option of the region acquiring special status within the Ukrainian state, Gazeta.ru reports that in this case Ukraine would follow the “Bosnian scenario.” This means that the state would be unified on paper, but in reality the rights of autonomy would be so broad that the republics could be considered independent states.

Gazeta.ru notes that the negotiations are being held right as the Ukrainian Army is retreating. The large city of Mariupol is surrounded, the separatist militants have ousted soldiers loyal to Kiev from the Donetsk and Lugansk airports, and a large number of Ukrainian soldiers are surrounded in the Donetsk Region. The Ukrainian government, headed by Petro Poroshenko and Prime Minister Arseniy Yatsenyuk, has expressed the need for a personnel shuffle within the leadership of Ukraine’s law enforcement agencies.

According to Vzglyad, the decision has been made in the Donetsk People’s Republic to employ Ukrainian POWs to restore houses, factories, and roads destroyed during the hostilities. There are more than 700 Ukrainian soldiers being held captive in the breakaway republic.

Deputy Director of the CIS Institute Vladimir Zharikhin told Vzglyad that Ukrainian POWs could be used as workers, although he does not think the practice will be used on a large scale. According to Zharikhin, the use of Ukrainian soldiers to restore cities destroyed by Ukrainian artillery would be “quite a successful propaganda move, but nothing more than that.”