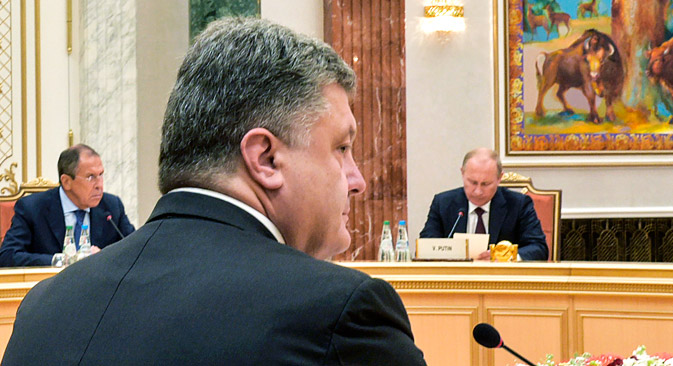 Ukrainian President Petro Poroshenko has declared a temporary ceasefire in eastern Ukraine after a telephone conversation with his Russian counterpart Vladimir Putin. Russian experts believe the time to put an end to the bloodshed is long overdue. However, such a decision could be interpreted as weakness and may cost Poroshenko his political career.

The President of Ukraine Petro Poroshenko, following a telephone conversation with Russian President Vladimir Putin, has announced a temporary ceasefire in the Donbass, the area of eastern Ukraine comprising the Donetsk and Lugansk regions. Earlier, Putin's press secretary Dmitry Peskov confirmed a telephone conversation between the presidents, but made no mention of such an agreement between the leaders of the two countries. According to him, Putin and Poroshenko only discussed ways to address the crisis.

On the morning of September 3, the website of the president of Ukraine and his Twitter page published a statement to the effect that Kiev is completely ceasing all military action.

“The result of the conversation was an agreement to a permanent ceasefire in the Donbass region. A mutual understanding was reached regarding the steps to be taken that will bring about peace,” the original message said.

Later, the presidential press service explained that Putin and Poroshenko had agreed to implement a temporary ceasefire.

The leadership of the self-proclaimed republics, however, doubts that all army units will obey the orders of the Ukrainian president to call a halt to hostilities.

“Poroshenko does not control these retaliatory battalions, nor will they submit to his decision,” said Vladislav Brig, the head of the international information political department of the DPR (Donetsk People’s Republic) Ministry of Defense to RIA Novosti. He noted that he is not aware of any agreements with the self-proclaimed DPR about a ceasefire.

Agreement is result of several factors

Russian commentators argued that the diminishing options available to Petro Poroshenko meant that the move to implement a ceasefire was a logical one.

“This is a moment that is long overdue, if not overripe. A plurality of internal political reasons pushed the president to take this step, including the countless number of victims of the military and civilian population,” Pavel Zolotarev, the deputy director of the Institute of U.S. and Canadian Studies, told RBTH.

According to Zolotarev, the leadership change in the breakaway republics played a role in the decision of the Ukrainian president to seek a ceasefire. “It really could be their own people there. And this question, I think, was raised during the call between Putin and Poroshenko,” he said.

However, Zolotarev believes that the arrival of American and French warships in the Black Sea was not an influential factor in the agreement.

“This is not the first time the ships have come to the Black Sea, and their presence has no effect in any way. This is only a demonstration of the flag and to what extent Ukraine has the support of its NATO member allies –  Bulgaria, Romania, Turkey, their North Atlantic alliance partner in Georgia and ... actually everyone. Russia is not at all scared by this demonstration,” said Zolotarev.

According to independent military expert Viktor Litovkin, Poroshenko faced pressure to seek a ceasefire not only from Russia, but also due to a series of failures by the Ukrainian army in recent battles in the Donetsk and Lugansk regions.

“The regular army has suffered setback after setback in recent weeks. The basic fact that played a role in the [Ukrainian] president’s decision was Ukraine’s incapacity and unwillingness to continue to wage war against its own people, unlike what we are seeing with the National Guard and the battalions, which are commissioned by oligarchs,” the analyst said.

He stressed that public discontent is growing on the Maidan, Kiev’s Independence Square, as mothers do not want to send their sons to war just to have them return in zinc coffins or see them maimed.

“Financial, economic, and logistical aspects of the Ukrainian economy also played a huge role in the decision of the [Ukrainian] president. Regarding human resources, I have aleady said that there has been a failure in all three mobilizations for war. The country is on the verge of economic collapse,” said Litovkin.

According to Litovkin, the Ukrainian president wants to appear as a peacemaker for the upcoming NATO summit in Wales and show that NATO support has become a decisive contribution to the achievement of the truce in the east of Ukraine.

“What's next is the big question. The ceasefire must endure. There will be a lot of factors that could interfere, including the actions of Ukrainian nationalist radicals,” said Litovkin, who added that the status of the region should be the subject of negotiations.

“It is possible that it could obtain special status within Ukraine, where it will have maximum autonomy, the state language will be Russian, and the people will have the ability to choose their own leaders and to create their own police and law enforcement authorities,” he said.