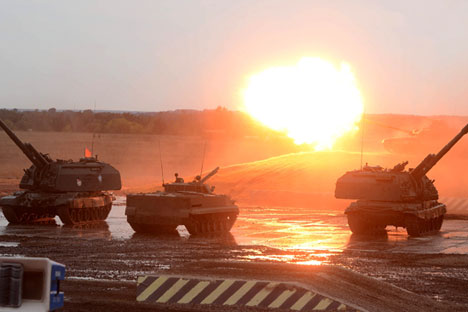 RBTH presents a selection of views from leading Russian media on the latest developments in Ukraine, including confirmation of the death of missing Russian photojournalist Andrei Stenin, a report on proposed changes to Russia’s official military doctrine, and analysis of Kiev’s current position on the gas dispute with Russia.

On Wednesday morning, Vladimir Markin, representative of the Russian Investigative Committee, said that the death of Andrei Stenin, a photojournalist working for the Rossiya Segodnya news agency, has been officially confirmed. For a long time, Stenin was considered as “missing” in the southeast of Ukraine. Stenin disappeared on August 5, and was believed by some to have been held prisoner by the Ukrainian military. However, examination results on one of the victims of an attack that occurred to the northwest of the village of Dmitrovka have confirmed that they were the remains of Stenin. Rossiyskaya Gazeta alleges that here, on August 6, the Ukrainian army fired upon and destroyed a convoy of refugees who were en route from the city of Snezhnoye to Dmitrovka.

“The Investigative Committee said that in their criminal investigation, they intend not only to establish the circumstances of the death of Andrei Stenin, but also identify the specific perpetrators who need to be charged with this criminal act,” writes Rossiyskaya Gazeta. Stenin is the fourth Russian journalist killed in the southeast of Ukraine since the beginning of the armed conflict in the region.

Mikhail Popov, Deputy Secretary of the Security Council of the Russian Federation, said Tuesday that the official Russian military doctrine would be revised to meet the changing nature of military threats. Gazeta.ru, in analyzing the possible changes, feels certain that these will take into consideration the situation in Ukraine.

“Most likely, this will focus on the increasing danger of destabilizing forces coming from the outside, that is, the threat of ‘colored revolutions’, suggests the publication in a reference to popular uprisings in Ukraine, Georgia and Kyrgyzstan in the last 10 years. In addition, according to Gazeta.ru and the experts it interviewed, the new doctrine will pay significant attention to NATO, relations with which have been frozen because of the conflict in Ukraine.

In the new document, the wording about Russia’s readiness to cooperate with the alliance - part of the current doctrine, adopted in 2010 on the background of warming relations between Russia and the West - will disappear, and particular focus will be given to the deployment of a missile defense system in Europe that potentially threatens Russia’s security.

“No matter how the Ukrainian crisis ends, future relations with NATO will not be the same,” Gazeta.ru quotes the words of Ruslan Pukhov, director of the Center for Analysis of Strategies and Technologies. On the other hand, Pukhov believes that the likely tightening of the language in the military doctrine will not put an end to cooperation between Moscow and the alliance. According to Pukhov, the new doctrine will be “tougher, but at the same time, diplomatic.”

Nezavisimaya Gazeta writes that the basic demands of the Kiev authorities in their dispute with Russia over gas supplies amount to a sharp reduction in the price of Russian gas, via the provision of discounts on current prices on the European commodity exchange, and a revision of the Russian-Ukrainian contract on gas transit to Europe.

Ukraine considers the current price of gas unfair, and, according to Ukrainian officials, they have already overpaid Gazprom to the tune of about $6 billion. Nezavisimaya Gazeta addresses “the non-recognition by Ukraine of its debt to Gazprom,” and Kiev’s hope of challenging the state company in the Arbitration Institute of the Stockholm Chamber of Commerce.

Experts interviewed by the publication say that Gazprom agreeing to reduce gas prices for Ukraine is a “practically unbelievable” scenario. In fact, Kiev wants Russia to sell Ukraine gas at a cheaper rate than to European markets, something that is unacceptable for the Russian side. Sergei Pravosudov, director of the Russian National Energy Institute, believes that the setting of such strict conditions by Kiev is due to the prevailing political forces, which have an interest in exacerbating the gas conflict with Russia.