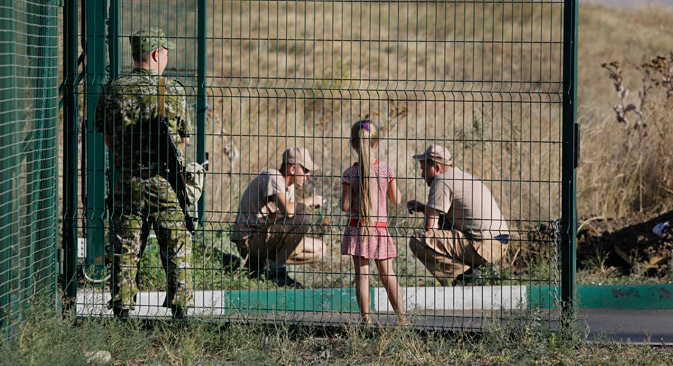 Moscow has a vital interest in maintaining a unified Ukraine in which the pro-Russian south-eastern regions will have a distinct voice. The main goal of Russia’s support for the militants in the Donbass region is to ultimately prevent Ukraine’s entry into NATO and to preserve its non-aligned status.

Moscow has officially made it clear that Kiev must listen to the opinions of the south-eastern regions of Ukraine, where the population speaks mostly Russian and traditionally gravitates towards Russia. This is why the Kremlin is seeking direct negotiations between Kiev and representatives of the breakaway republics in the southeast, at which they should agree upon the principles of the future government.

“We need to immediately begin substantive, meaningful negotiations, and not just on technical issues, but on the political organization of society and statehood in the southeast of Ukraine, in order to unconditionally guarantee the legal interests of the people who live there,” said Russian President Vladimir Putin.

Depending on the results of such negotiations, Ukraine may become a confederation. This was the scenario put forward by representatives of the Donbass militias at the September 1 consultations in Minsk. They propose that the self-proclaimed republics be given a special status, with their own armed forces and judicial system, as well as special foreign trade rights – including the right to join the Customs Union of Russia, Belarus and Kazakhstan. In this case, there would be domestic customs borders between various parts of Ukraine. In return, the leadership of Donetsk and Lugansk promises to “make every effort to support peace and maintain a single economic, cultural and political space in Ukraine.”

At the same time, Moscow is strongly opposed to the collapse of Ukraine. Indicative of this is Vladimir Putin’s address to the leadership of Donetsk and Lugansk, requesting them to maintain the formal territorial integrity of Ukraine.

According to Sergei Markedonov, an associate professor at the Russian State University for the Humanities, to Russia it does not matter how the peace agreement between Kiev and the unrecognized republics of Donetsk and Lugansk is formalized.

“The question of status is secondary – it does not matter whether this process is called federalization or confederation. This process is the only way to achieve the goal – which is that Ukraine becomes a buffer state that does not become a tool for the containment of Russia or for putting pressure on it,” said Markedonov. And the only way to achieve this is by keeping the Russian-speaking regions within Ukraine (which will counterbalance the anti-Russian elites in the west of the country) and providing them with tools to monitor state policies in the field of foreign relations, the economy, and even education.

Here a foreign observer might wonder – how do these statements of the Russian president correspond with the support provided to the separatists of Donetsk and Lugansk people’s republics? Political scientists answer that the Kremlin simply will not allow the military defeat of the breakaway republics, because if Donetsk and Lugansk surrender, it will lead to the transformation of the whole of Ukraine into an outpost of the West, directed against Russia.

In fact, Ukraine is important not in itself, but in the light of Russia’s relations with the West. Its neutral status is of paramount importance for the Kremlin. This point has been made crystal clear by the statements of Russian officials.

“If Ukrainian authorities abandon neutrality, this will have very far-reaching consequences. Calls for the abolition of the non-aligned status of Ukraine have caused particular alarm in Moscow, against the background of NATO’s plans for moving its infrastructure closer to the borders of Russia,” a Russian diplomatic source told the Kommersant newspaper. Therefore, attempts by Kiev authorities to abandon their country’s non-aligned status may foil any chances of reaching a settlement.

Alternative to negotiations – a new crisis

Some Russian political analysts warn that delaying the negotiation process may lead to the collapse of the Ukrainian state, after which Moscow would have no choice but to support the demands for independence of Donetsk and Lugansk.

“Already, in the space of the next 1–2 months, fighting may spill over from the Donetsk and Lugansk people’s republics to other regions, and there may be a collapse of the economy, as well as the social, housing and public utility spheres, which could lead to a new political crisis,” Andrei Epifantsev, an independent Russian political analyst, told RBTH. “In such a situation, Russia would have to work on not achieving a compromise, but creating a buffer between the totally anti-Russian, half-ruined and militarily defeated Ukraine and its own territory,” said Epifantsev.

He argues that this buffer zone, which would include the Donbass, could stretch from Odessa to Kharkov, and would become a new partially recognized state under the protection of Russia, something like the breakaway pro-Russian republic of Transnistria in Moldova.

However, contrary to popular opinion in the West, Russia would like to avoid such a scenario. Firstly, this is because the gas pipeline from Russia to Europe runs through Western Ukraine, and its safety would be jeopardized under this scenario. Secondly, it is clear that Moscow would have to maintain and rebuild these territories, and this under the conditions of their internationally unrecognized status.