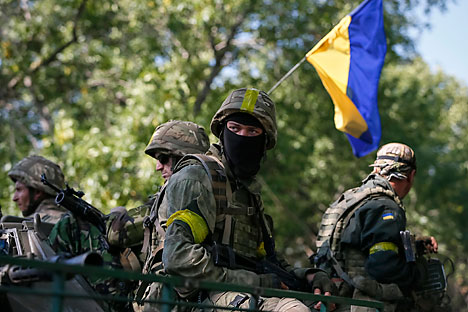 RBTH presents a selection of views from leading Russian media on the latest developments in Ukraine, including analysis of the problems Moscow and Kiev will face in negotiating a resolution to the conflict in southeast Ukraine, and a summary of Ukrainian President Petro Poroshenko’s achievements so far at the NATO summit in Wales.

Ukrainian President Petro Poroshenko announced on September 4 that he is ready for a ceasefire, but only if the negotiations held in Minsk within the contact group are successful. The group includes representatives of Ukraine, the unrecognized republics of south-eastern Ukraine, Russia and the OSCE. The negotiations are expected to be held on Friday, September 5, and according to the Ukrainian president, the agreement to gradually introduce a peace plan may finally be signed. The leaders of the Donetsk and Lugansk republics have also expressed their readiness to commit to a ceasefire if the agreement is signed.

"In any case, the antiterrorist operation's capitulation will set an unfortunate precedent for Kiev," writes Gazeta.ru. However, the publication adds that the scenario of further military action promises dangerous consequences for Kiev: The militias would continue their offensive and more territory would be lost.

Experts interviewed by Gazeta.ru believe that the Ukrainian government faces another problem: the lack of control over part of the forces active in the southeast. Anatoly Tsyganok, Coordinator of the Center on Military Prognostics at the Institute of Political and Military Analysis, explains that besides the regular Ukrainian forces, the antiterrorist operation also includes volunteer battalions from the National Guard, which may refuse to halt their military activity, even if Poroshenko orders a ceasefire.

Meanwhile, Nezavisimaya Gazeta writes that the solution to the crisis is made difficult by the difference in Russia's and Ukraine's approach to the essence of the Donbass conflict: Moscow considers it to be an "internally political and civilian confrontation," whereas Kiev believes that it is a result of an external aggression on the part of Russia.

When telling German Chancellor Angela Merkel about his vision of a peaceful solution, Poroshenko said the solution's necessary conditions included "the withdrawal of foreign forces from Ukrainian territory and the liberation of all Ukrainian hostages and citizens." According to Nezavisimaya Gazeta, such a view of a peaceful settlement does not correspond to the Russian view, since the Kremlin does not recognize the presence of foreign forces on Ukrainian territory and Ukrainian citizens, who in Kiev's opinion are being illegally held in Russia (including pilot Nadezhda Savchenko and director Oleg Sentsov), are, in Moscow's opinion, criminals awaiting trial.

Ukraine sees Russia's aggression as the main cause of bloodshed in the Donbass, while Russia believes that the conflict arose out of Kiev's attempt to suppress the freedom of the regions that rebelled against an “unconstitutional coup.”

Kommersant writes that forces from the self-proclaimed republics are approaching the coastal city of Mariupol, in the south of the Donetsk Region. According to the newspaper's correspondent, no one was in any hurry to stop shooting on September 4, and the pro-autonomy forces were continuing their offensive from east of Mariupol. "By evening the line of fire came very close to Mariupol: Grad missiles began hitting roadblocks at the entrance to the city," reports Kommersant.

In a different article Kommersant writes about the results of Ukrainian President Petro Poroshenko's participation in the NATO summit in the Welsh city of Newport. Ukraine was able to secure a supply of high-precision weapons from NATO countries, and Kiev immediately received 15 million euros from NATO for the modernization of its army and fortification of its defense.

NATO Secretary General Anders Fogh Rasmussen also announced that the alliance does not intend to enter a military confrontation with Russia over Ukraine. "If Russia continues invading Ukrainian territory, it will be necessary to respond with deeper, more severe economic sanctions, which will of course cause damage to the Russian economy and Russia's economic situation will worsen," said Rasmussen.

Read more: Ukrainian conflict: What exactly is Russia trying to achieve in the east?