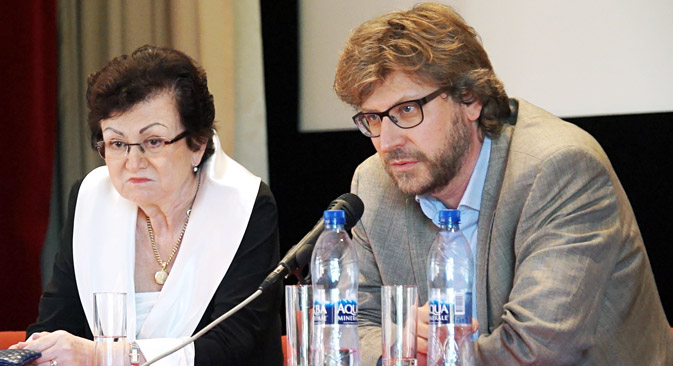 Political analyst and editor of the Russia in Global Politics magazine Fyodor Lukyanov believes that the crisis in Ukraine has been caused by the weakness of the Ukrainian state and exacerbated by the intractable positions of Russia and the West. He is also convinced that Russia will give up cooperation with the Western world for the foreseeable future.

The conflict in eastern Ukraine and its grim international consequences were the main topics of a lecture that Fyodor Lukyanov, an influential Russian pundit and editor in chief of the Russia in Global Politics magazine, delivered on September 6 at Moscow's Library of Foreign Literature. The meeting with Lukyanov was held as part of the third international congress of literary translators and was attended by translators from 55 countries.

Lukyanov expressed the hope that the ceasefire reached on the previous day between the militia and the Ukrainian troops would hold. Although many difficulties still lie ahead, from now on the conflict will be resolved through political, rather than military means, he said. In Lukyanov's opinion, the very fact that Russia and Ukraine found themselves "nearly at war" was a sign of a complete failure of Russian, Western, and Ukrainian policies. Lukyanov puts much of the blame at the door of “numerous hotheads,” who, carried away by political fervor, have forgotten how close and fraternal the ties are between the two countries.

Failed statehood as cause of conflict

Lukyanov believes that over its 20-odd years of independence, the Ukrainian state has still not developed a strong unity and that was the principal cause of the upheaval that has rocked the country. Anything could have served as the spark to ignite the tinderbox, he said. "Now, especially looking at the consequences, it is almost ridiculous to recall what it all started with: Yanukovych did not sign the association agreement with the EU, that 900-page mind-numbingly boring document that I don't think anybody in Ukraine had read," Lukyanov said.

According to him, the real underlying cause of the conflict is the contradictions that have been building up in Ukrainian society for years. These represent not only the opposition between the west of the country, which is leaning towards Europe, and the pro-Russian east - things are far more complicated. Ukrainian society has been and remains split along many lines, including social ones. "In Ukraine, the power of oligarchs has turned into a foundation for a state model," Lukyanov explained. "The most amazing thing is that Maidan and the revolution have swept away and destroyed everything, but oligarchy rule has remained, and the people we see in Ukrainian politics now are the very same people who have, over the previous 20 years, brought the country to its current state," he continued.

Simultaneously, the expert said, Russia's relations with the West have also been changing. For a long time, Russia sought cooperation and an alliance with the Western world and Putin, now widely seen as the West's worst enemy, began his tenure in power as a politician very much aiming at cooperation with the U.S. and Europe. However, it so happened that Russia and the West have failed to find a common language. The West wanted Russia to follow its model, which Russian leaders could not agree to, both because of their own ambitions and also because Russia is too a distinct country to develop as an average European state.

Mutual misunderstanding led to the failure of attempts at rapprochement, meaning that at the start of the crisis in Ukraine, relations between Russia and the West were lukewarm. What followed became "a tug of war" between Europe and Russia, with each trying to suck Ukraine into its sphere of influence. Lukyanov is disappointed with both sides: "The behavior of the external forces – both Russia and Europe – was not constructive, to put it mildly. Each stuck to the position: 'No, I won't let go'; and in the end we've got what we've got."

As for Russia's actions in Crimea, Lukyanov described them as pragmatic. If Kiev was to be firmly taken by a blatantly anti-Russian regime (which the regime that overthrew Yanukovych was and is), very soon the issue of the Russian Black Sea Fleet's withdrawal from Sevastopol would have inevitably been raised. "For various reasons, which have nothing to do with Ukraine, Russia does not consider it possible to retreat from Crimea and lose its capability for force projection to the south," he reasoned. Crimea created a domino effect, which was provoked by the Kiev authorities themselves. Instead of immediately getting down to uniting the country, they adopted an unconstructive position along the lines of: "Maidan has won; all those who are against Maidan should just shut up," which caused an uproar in the east of the country. That later evolved into a confrontation that Russia could not but get involved in. As a result, blood was shed.

Russia's choice: Back to the USSR?

Lukyanov is convinced that the situation in Ukraine could not have been planned by the Russian authorities in advance: They had to react to a situation that arose unexpectedly and was constantly changing. A further escalation of the confrontation with the West has brought sad results: "Relations have been ruined for a long time. Even if, God grant, the situation in Ukraine stabilizes, it will not change anything. We shall never return to the model of, if not real than at least declared, rapprochement [with the West – RBTH], which was adopted after the Cold War."

Russia has now approached an existential choice, Lukyanov said. "It is an attempt to mentally go back to the crossroads that we passed in the 1980s, when Gorbachev chose the path of cooperation with the West. Since that model has brought strange results, there is (primarily among the Russian leadership) a desire to return to that crossroads and choose another path, that of strengthening Russia's statehood, prestige and so on."

Lukyanov is not convinced that this is a good approach. It is impossible to turn back time, he said. Time will show whether Russia will indeed choose this path, but in any event, we all are in for "many more upheavals," he warned.