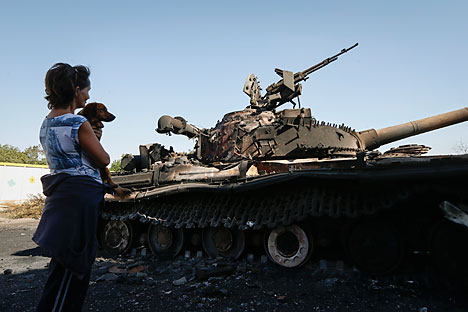 A woman looks at a burned Ukrainian tank in the village of Kominternovo, on the outskirts of the southern coastal town of Mariupol. Vladimir Putin and Petro Poroshenko agreed on Saturday that a ceasefire in eastern Ukraine was generally holding. Source: Reuters

RBTH presents a selection of views from leading Russian media on the latest developments in Ukraine, featuring extensive analysis of the prospects for the ceasefire in the southeast, as well as a deal for five NATO states to provide Kiev with military aid, and a report on a possible ban on Russian food imports to Ukraine.

Over the weekend, representatives of the Ukrainian military as well as the militias of the unrecognized republics reported numerous incidents in which the ceasefire declared on Friday was breached. Still, Russia and Ukraine maintain cautious optimism for the prospects of the ceasefire. Despite isolated incidents of exchange of fire, the sides have started exchanging prisoners.

On Sunday, the text of the protocol signed at the Friday meeting of the Russia–Ukraine–OSCE contact group was published. Experts polled by the paper point at the protocol's numerous weak points: For example, it envisages just the recognition of a "special status" for the parts of the Donetsk and Lugansk regions occupied by the self-declared Donetsk and Lugansk people's republics. The paper quotes Ukrainian pundit Mikhail Pogrebinsky as saying that this does not even envisage a decentralization of Ukraine, let alone the recognition of the independence of the unrecognized republics, which the militia seek, so their leaders are unlikely to accept this.

Another weakness in the plan is the requirement to "the withdrawal from the territory of Ukraine of illegal armed groups, military hardware, and militants and mercenaries.” By "illegal groups, militants and mercenaries,” Kiev means all the militants, who, needless to say, have no intention of meeting this requirement. Pogrebinsky concludes that the signed protocol is a rough copy that makes it possible to stop the bloodshed and start preparing for winter, while the talks on a settlement that would truly satisfy both sides are still ahead.

The Rossiyskaya Gazeta paper analyzes the prospects of the Ukrainian ceasefire. It points out that experts' opinions differ: While some describe the current ceasefire as technical and predict that it will last no longer than five days, others, on the contrary, speak of a possible political settlement on the basis of the Minsk plan.

The Moskovsky Komsomolets daily concludes that the ceasefire has in effect failed as hostilities have resumed outside Mariupol. According to the militiamen of Donetsk and Lugansk, the Ukrainian army are making good use of the truce by regrouping and strengthening their combat positions. The leaders of the self-proclaimed republics have called for OSCE monitoring groups to be set up in the region.

Deputy prime minister of the so-called Donetsk People's Republic Andrei Purgin has already said that "firm guarantees of peace can be ensured only through OSCE monitoring. Artillery positions should be pulled back out of range and international observers should be stationed in the security zone between them. Otherwise, the aggressive and unmanageable units of the National Guard will constantly violate the ceasefire."

Vzglyad takes a look at Ukrainian President Petro Poroshenko's announcement that five NATO countries (the U.S., Norway, Italy, France, and Poland) are ready to provide Ukraine with high-precision weapons and concludes that the statement is largely political and is aimed at boosting the popularity rating of the president and his supporters ahead of the upcoming parliamentary election.

According to military expert Viktor Litovkin, "weapons themselves are of little use unless ammunition for them is supplied too, which have different calibers in NATO." Therefore, in order to use the imported weapons, Ukraine would have to revamp the whole of its defense industry, which is a very costly undertaking that Ukraine in its present state simply has no money for.

The Ukrainian authorities have voiced their readiness to ban the import of some goods from Russia, worth about $3 billion a year, writes Gazeta.ru. The move will affect mainly food supplies. In a separate development, Prime Minister Arseny Yatsenyuk has announced that Ukraine "is considering stopping the transit of Russian gas to Europe" through its territory. Experts polled by Gazeta.ru agree that the ban on Russian food imports to Ukraine is likely, although it will not become a serious blow to the Russian economy, while the threat to cut off the transit of gas is a bluff.