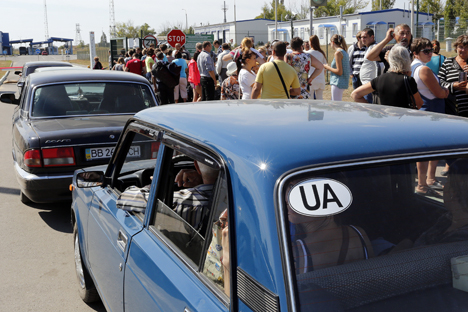 After waiting for the ceasefire, Ukrainian refugees are returning home. Source: ITAR-TASS

RBTH presents a selection of views from leading Russian media on the latest developments in Ukraine, including analysis of Ukrainian President Petro Poroshenko’s visit to Mariupol and reaction to the ceasefire in Kiev, as well as news of the return of a number of refugees from Russia’s Rostov Region and the beginning of rebuilding in Donetsk and Lugansk.

Gazeta writes that a two-kilometer-long line of pedestrians, cars, and buses headed for the Lugansk Region has formed at the Donetsk-Izvarino checkpoint in Russia’s Rostov Region. After waiting for the ceasefire, Ukrainian refugees are returning home. The general mood at the checkpoint is cheerful. People are discussing their future plans for a peaceful life and talking about where to get wood, metal, plumbing, and other necessities to rebuild their homes.

A truce was observed yesterday in the majority of districts in the Donetsk and Lugansk regions, writes the Kommersant daily. In Mariupol, whose outskirts witnessed hostilities just the day before, the situation was more stable and calm – so calm that Ukrainian President Petro Poroshenko paid a visited to the recently besieged city. Asked whether he feels he has lost the war, Poroshenko said no. According to him, the agreements reached in Minsk do not envisage the dismemberment of Ukraine and do not cast doubt on its territorial integrity.

Meanwhile, experts draw attention to the fact that the 12-point peace plan for the Donbass, which was adopted at the contact group’s last meeting in Minsk on September 5, generally coincides with the proposals put forth by the Boisto Group, a community of Russian and American analysts that had previously recommended its own scenario to put a stop to the crisis.

Alexander Dynkin, director of the Institute of World Economy and International Relations at the Russian Academy of Sciences and leader of the group of Russian experts, noted the feeling that there has been a “change in modality” in the Ukraine crisis. “The toggle has switched from pumping out mutual accusations and escalating the armed conflict to finding a way out of it,” Dynkin said.

The newspaper Moskovsky Komsomolets reports on the truce under way in the Lugansk and Donetsk People’s Republics, which is giving the locals an opportunity to rebuild normal life. Municipal services have begun repairing power lines and water supply systems. Donetsk, which slept soundly for the first time in months in the absence of night attacks, was almost in a celebratory mood as its inhabitants marked the anniversary of the Donbass’ liberation from the German occupation. Monday, September 8 was pronounced a holiday.

Vzglyad writes that Ukrainian President Petro Poroshenko will have to defend the truce agreement in Kiev, where it has been met with sharp criticism. During a visit to the frontline in Mariupol, the Ukrainian president urged the locals not to build fortifications around the city and promised that it would definitely remain part of Ukraine. While Poroshenko was busy raising the morale of Mariupol’s defenders, former prime minister and leader of the Batkivshchyna Party Yulia Tymoshenko issued sharp attacks against the protocol signed in Minsk on Friday, saying the Kiev had thereby de facto recognized the breakaway Donetsk and Lugansk people’s republics.